Source: NYT (10/8/19)
‘South Park’ Creators Offer Fake Apology After Show Is Erased in China
“Like the N.B.A., we welcome the Chinese censors into our homes and into our hearts,” the show’s creators said in a tongue-in-cheek response. “We too love money more than freedom and democracy.”
By Daniel Victor 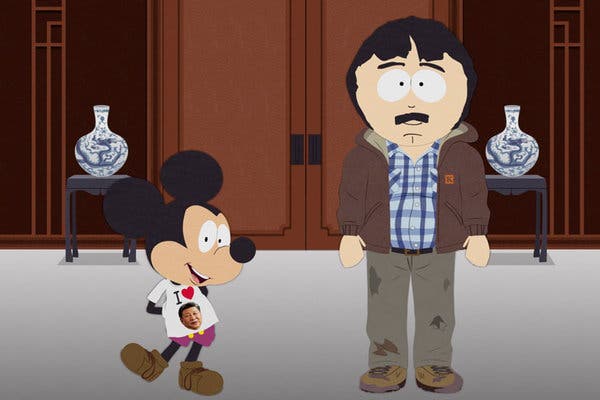 HONG KONG — “South Park,” the long-running Comedy Central cartoon whose mockery has spared few touchy topics, was erased from major platforms in China after an episode last week taunted Chinese censors and the far-reaching effect they often have on American entertainment.

The government’s censors, who routinely quash news and commentary deemed undesirable by the ruling Communist Party, wiped out video clips and discussions of the show, which premiered in 1997 and has lasted 23 seasons. Once known mostly for the raunchy humor coming from the mouths of its elementary-school-age main characters, the show has in recent seasons focused on political and cultural satire, without abandoning its boundary-pushing ways.

Last week’s episode, called “Band in China,” appeared to cross a new line for the Chinese authorities. On Baidu Tieba, a popular discussion platform, searches for “South Park” on Tuesday returned the following message: “According to the relevant law and regulation, this section is temporarily not open.”

Searches for the show were also fruitless on Youku, a video hosting service, which similarly cited “the relevant law and regulation.” On Weibo, the country’s most popular social network, posts mentioning the show could not be found.

The censorship occurred as the N.B.A. was unintentionally demonstrating how protecting business interests in China can chill speech back in the United States. The basketball league has scrambled to contain a backlash in China since Daryl Morey, the general manager of the Houston Rockets, tweeted support last week for the Hong Kong protests, which are reviled by the Chinese government.

Though the league has supported political expression by its players, it was less supportive of Morey, prompting accusations that it valued its business in China more than free speech.

Whereas the N.B.A. has struggled to respond to the geopolitical fracas, the creators of “South Park” appeared to relish the fight. The show’s creators, Trey Parker and Matt Stone, put out a fake apology on Monday, poking fun at the N.B.A. while insulting Xi Jinping, China’s president.

“Like the N.B.A., we welcome the Chinese censors into our homes and into our hearts,” the tongue-in-cheek statement read. “We too love money more than freedom and democracy. Xi doesn’t look just like Winnie the Pooh at all.”

That last part makes more sense in the context of the episode, which had two plot lines related to China. Spoilers ahead.

In one, the character Randy Marsh flies to China hoping to expand his marijuana business there, only to be arrested at the airport. In a work camp, he meets Winnie the Pooh, who, the show explains, was banned after Chinese social media users pointed out his resemblance to Mr. Xi. (The Pooh censorship is real, and reporting on it got John Oliver censored last year.)

Meanwhile in Colorado, the South Park children form a band, and a manager wants to make a biopic about them — but insists that their life story be told in a way that will be acceptable to Chinese censors, so they don’t lose access to the market. He instructs the boys to cut references to the Dalai Lama (seen by the Chinese government as a separatist), organ transplants (China has been accused of harvesting prisoners’ organs) and homosexuality (nothing is wrong with that subject “unless you want to make money in China,” he says).

Eventually the boys tire of the ordeal. “I want to be proud of who we are, guys, and anyone who would betray their ideals just to make money in China isn’t worth a lick of spit,” says one of them, Stan.

(The full episode is available online here, for those with a high tolerance for profanity.)

The N.B.A. is hardly the first international business to make concessions to China’s political sensitivities as it seeks access to its lucrative market, or to forcefully apologize after running afoul of them. Movie studios, especially, have worked to ensure that their scripts aren’t at odds with state censors, lest they lose billions in potential business.

Disney, for one, earned $858 million for “Avengers: Endgame” in the United States and an additional $614 million from China. Moviegoers in China bought an estimated $8.87 billion in movie tickets last year, according to box office analysts.

The “South Park” episode mocked Disney by turning a Mickey Mouse look-alike into a craven profit seeker. On his flight to China, Randy Marsh was surrounded by characters from “Avengers” and “Star Wars,” along with N.B.A. players.

The world of e-sports had its own run-in with Chinese politics on Tuesday, when Blizzard Entertainment said it was suspending Chung Ng Wai, a Hong Kong player of the game Hearthstone, for a year and forcing him to forfeit prize money. Mr. Chung, who uses the name Blitzchung, had spoken out in support of the Hong Kong protests during a livestreamed interview.

The company said Mr. Chung had broken a rule barring players from engaging in any act that “brings you into public disrepute, offends a portion or group of the public, or otherwise damages” Blizzard’s image.

In their statement on Monday, the “South Park” creators parodied the apologies that businesses have often made after crossing the Chinese government.

“Long live the Great Communist Party of China!” they wrote. “May this autumn’s sorghum harvest be bountiful! We good now China?”