Classical Chinese poetry is the dominating lyric form of world literature. Mainstream shi (lyric poetry) is a genre spanning more than two millennia, with poems numbering in the hundreds of thousands—extant shi from the medieval Tang dynasty alone consists of 48,000 poems by 2,200 authors. In these thousands of poems are some of the world’s more enduring examples of the short occasional poem, inspiring readers and writers across the globe with its vivid language of perspicuity. And embedded within that great lyric tradition, from its very beginnings to contemporary times, is the subtle but unsung form of the sequence of poems. Along its related meta-forms of the literary anthology and album of paintings, this forms the Chinese lyric sequence.

The Chinese lyric sequence was never named or even noticed, by the poets, painters, or anthologists who worked in the genre over the millennia. It was an invisible but powerful form; in fact, Professor Joseph Allen argues that its power was in its invisible hold on the artists. Although the works discussed are some of the most canonical in the tradition, this is the first time that close attention and detailed analysis has been brought to the Chinese lyric sequence, both in its specific manifestations and as a shared aesthetic form. In doing so, Allen provides a focused introduction to Chinese literature and art for the general reader, while offering new insights for the specialist. END_OF_DOCUMENT_TOKEN_TO_BE_REPLACED

This special issue of the ‘Australian and New Zealand Journal of Art’ seeks papers that examine the art of the Greater China region encompassing mainland China, Macao, Hong Kong and Taiwan as well as that of diasporic artists working in different contexts around the world. Greater China is understood as an active cultural space defined by historical, multi-directional flows of people and ideas rather than territorial boundaries, and the Chinese diaspora connects China to all parts of the world. By recovering forgotten or marginalised histories of artworks, artists’ lives, art networks, and exhibitions, it is possible to consider alternatives to monolithic national narratives and reconfigure the field of “Chinese” art history in more complex and connected ways. END_OF_DOCUMENT_TOKEN_TO_BE_REPLACED Visual images are everywhere in international politics. But how are we to understand them? In Sensible Politics, William A. Callahan uses his expertise in theory and filmmaking to explore not only what visuals mean, but also how visuals can viscerally move and connect us in “affective communities of sense.” Drawing from Life: Sketching and Socialist Realism in the People’s Republic of China
By Christine I. Ho
University of California Press, 2020.

Drawing from Life explores revolutionary drawing and sketching in the early People’s Republic of China (1949–1965) in order to discover how artists created a national form of socialist realism. Tracing the development of seminal works by the major painters Xu Beihong, Wang Shikuo, Li Keran, Li Xiongcai, Dong Xiwen, and Fu Baoshi, author Christine I. Ho reconstructs how artists grappled with the representational politics of a nascent socialist art. The divergent approaches, styles, and genres presented in this study reveal an art world that is both heterogeneous and cosmopolitan. Through a history of artistic practices in pursuit of Maoist cultural ambitions—to forge new registers of experience, new structures of feeling, and new aesthetic communities—this original book argues that socialist Chinese art presents a critical, alternative vision for global modernism.

Christine I. Ho is Assistant Professor of East Asian Art at the University of Massachusetts Amherst. END_OF_DOCUMENT_TOKEN_TO_BE_REPLACED

A group of students at the Central Academy of Fine Arts (CAFA), China’s top art school, are calling on school authorities to fire a professor who has been disciplined for sexual misconduct but has retained his teaching position.

The demand first made headlines on January 10, when one alleged victim posted an audio recording (in Chinese) to social media. The clip features a conversation between her and a member of the school’s discipline committee in which she asks why classes taught by Yáo Shùnxī 姚舜熙, who was found violating policies against sexual misconduct, were on the course schedule again.

In June 2019, dozens of students filed a collective complaint against Yao, accusing him of multiple instances of sexual harassment, selling students’ artworks without their permission, taking bribes, and fabricating allegations against other instructors at the school. END_OF_DOCUMENT_TOKEN_TO_BE_REPLACED The artist Gao Jianxiang at his Beijing studio, foreground, with his gallerist, Pierre Alivon, whose gallery ART.Des in the Chinese capital shows gay-themed work. Credit…Pierre Alivon

From the outside, the facade of Destination (a prominent Beijing venue that expressly welcomes gay people) is downright drab. But inside this four-story cultural center on the east side of the city, the works in the nonprofit art gallery can push boundaries.

This is no easy feat as censorship restrictions have been tightening in China under President Xi Jinping. And, although same-sex relations were decriminalized in 1997, gay Beijingers say they continue to face discrimination.

They look longingly to Taiwan, where a recent decision to legalize same-sex marriage on the self-ruled island of 24 million is being celebrated throughout the world. Taiwan has long been the heart of gay Asia.

In mainland China, acceptance of same-sex couples has progressed at a glacial rate. Many gay Chinese will never come out to their family, and there are still gay conversion centers around the country.

However, there is a quietly present gay community in Beijing. Destination, which opened 15 years ago as a nightclub and has since expanded to become a cultural center, is one of the few places where gay men can be open about their sexual orientation, according to observers. END_OF_DOCUMENT_TOKEN_TO_BE_REPLACED

MCLC Resource Center is pleased to announce publication of “Negotiating Colonial Visuality: Gao Chengxian’s Reminiscence of the Manchukuo Arts Exhibitions,” introduced and translated by Yanlong Guo, in our online series. The full essay/translation can be read at the follwing url: https://u.osu.edu/mclc/online-series/yanlong-guo/. Find the opening paragraph below.

Commemorating the Manchukuo[1] Emperor Puyi’s 溥儀 (r. 1932-1945) Admonitory Rescript to the People on the Occasion of the Emperor’s Return (回鑾訓民詔書), issued in 1935, the newly established State of Manchuria under Japanese colonial rule launched the First Art Exhibition in Commemoration of [Emperor Kangde’s] Visit to Japan and Announcement of the Rescript (第一回訪日宣詔記念美術展覧会) on May 2, 1937 in its New Capital (新京; current day Changchun).[2] The Manchukuo government organized eight such annual “national exhibitions” (國展) until 1945, when the Japan imperial army was defeated.[3] Each year, a review committee was appointed by a responsible institute to select artworks for the exhibition.[4] Accolades and cash stipends were bestowed on artists whose works were deemed the most excellent. The participating artists consisted of Japanese expatriate artists, such as Shouhou Kusakari 首藤春草 (1907-1994) and Yokoyama Shigeyuki 横山繁行 (1894-1946); prominent Chinese artists, such as Yu Lianke 于蓮客 (1899-1980), Wang Guanglie 王光烈 (1880-1953), and Luo Zhenyu 羅振玉 (1866-1940); and underrecognized Manchuria-born Chinese artists. One of the local and emerging artists was Gao Chengxian 高澄鮮 (1913-1990) (fig. 1), whose art activities during the Manchukuo period are known to us thanks to two interviews of him by Lu Ye 盧燁.[5] One of the interviews, published in 1990 and entitled “My Recollections of Participating in the Illegitimate Manchukuo Exhibitions of Calligraphy and Painting” (我參加偽滿書畫展的回憶), is translated below. [READ MORE]

The fall 2019 issue of the Trans Asia Photography Review is now available online at tapreview.org. (You may need to refresh your browser to view the new contents.) This issue, titled “Writing Photo Histories,” features the following articles and book reviews:

In her spellbinding 1993 documentary Inner Visions, Lydia Chen interviewed three struggling, idealistic young Chinese artists. Twenty-five years later, the same profilees are back in Chen’s latest film, Art in Smog, to discuss their careers again – this time as mature artists who worked hard to find their places in China’s now prosperous arts scene. Chen’s long-term relationship with them is unique, and makes for two very special documentaries which anyone who cares about the evolution of Chinese art over the past quarter century should watch. END_OF_DOCUMENT_TOKEN_TO_BE_REPLACED

Huang Yong Ping, the Chinese artist whose propensity for provocation allowed him to address taboo subjects in China and beyond with audacity and wit, has died at 65. His death on Saturday was confirmed by Gladstone Gallery, which represented him in New York and Brussels. A representative for the gallery did not immediately state a cause of death.

In his sly installations and sculptural work, Huang often melded techniques derived from the history of Chinese art and international avant-garde movements alike. His ability to deftly combine seemingly opposed methods of art-making made him one of the foremost artists in an emergent group of Chinese artists during the late 1980s. END_OF_DOCUMENT_TOKEN_TO_BE_REPLACED 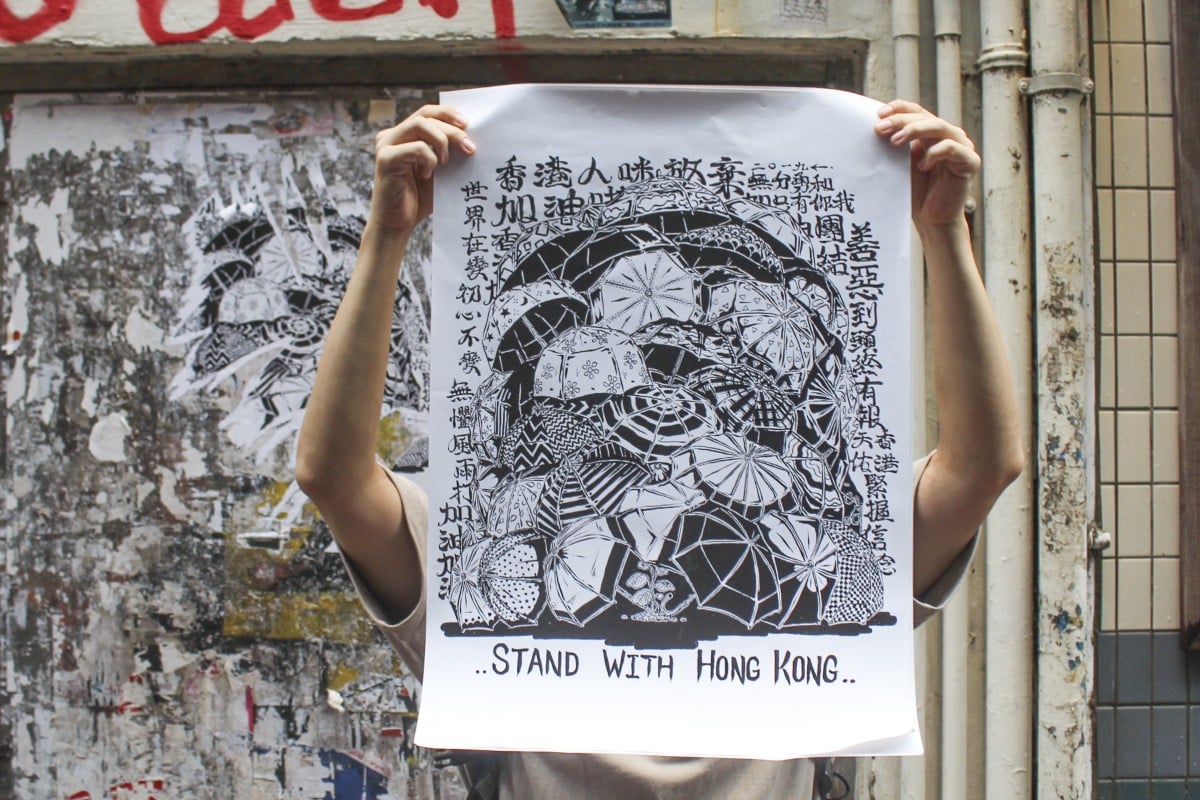 Graffiti artist Boms with his protest poster in a street in Mong Kok. Photo: Snow Xia

Boms has been run off his feet lately.

The Hong Kong street artist and dancer – who doesn’t want to be identified – has been plastering walls across the city with his protest posters, voicing his support for the large-scale anti-government movement over the past three months.

Unlike most of the protest art produced locally during this period, his drawings will also be headed for London and Amsterdam, where copies will be distributed to the public and be posted around the streets, over the next two months. END_OF_DOCUMENT_TOKEN_TO_BE_REPLACED 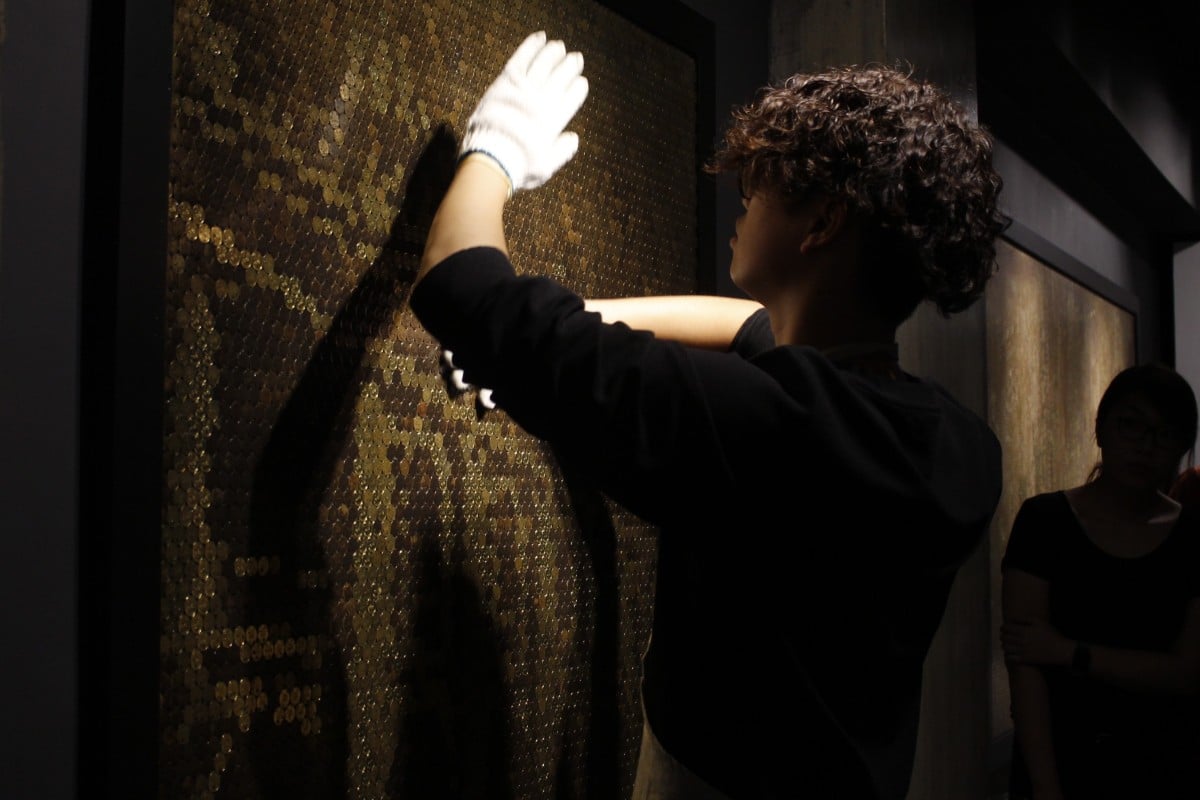 Giraffe Leung rubs a panel made of 20-cent coins with chemical solutions to create an image of Hong Kong at La Galerie Paris 1839 in Central. Photo: Snow Xia

Coins and darkroom photography may be falling out of use, but they have been given new life in an exhibition that explores and evokes Hongkongers’ collective memory.

“As e-payments and virtual money have replaced traditional money globally, I want to use money to remind us of the role … people and things play in our lives [and their value],” explains Leung, whose show re-examines unremarkable objects that became or are becoming obsolete. END_OF_DOCUMENT_TOKEN_TO_BE_REPLACED Liu Wei’s first solo museum exhibition in the United States, Invisible Cities, takes its title from Italian writer Italo Calvino’s novella of the same name. Presented across two institutions (moCa and the Cleveland Museum of Art) and developed in direct response to both spaces’ architecture, Invisible Cities presents a constellation of works that employs abstraction and fragmentation to create new narratives. Like Calvino’s book—an imagined set of conversations between traveler Marco Polo and the emperor of the thirteenth-century Mongol Empire, Kublai Khan—Liu’s work examines how objects can function as physical traces and intangible links between the visible and invisible. From sculptures carved out of books, a series of cut-up and repurposed household appliances (a refrigerator, a washing machine, and a waffle maker), to architectural monuments made from rawhide dog chews, Liu asks us to examine the relationship between material and power. The installation of works in Invisible Cities echoes the cities Polo describes—fantastical, beguiling places where things are never as they seem—and emphasizes that the world we live in is infinitely larger than what we can see. Liu’s work is an evocative reminder that how we perceive and negotiate our relationship to place allows us to see the conditions of its very construction. END_OF_DOCUMENT_TOKEN_TO_BE_REPLACED