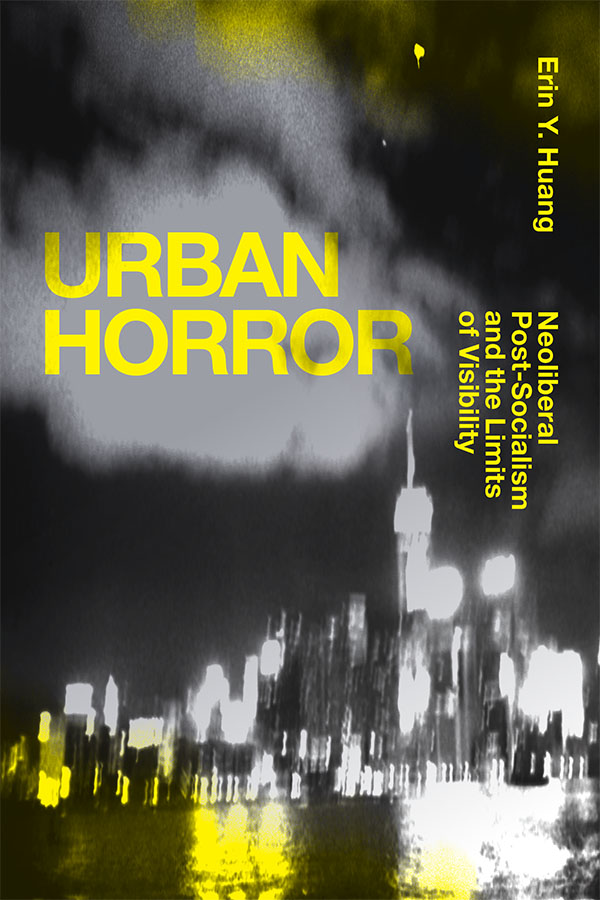 In Urban Horror, Erin Y. Huang theorizes the economic, cultural, and political conditions of neoliberal post-socialist China. Drawing on Marxist phenomenology, geography, and aesthetics from Engels and Merleau-Ponty to Lefebvre and Rancière, Huang traces the emergence and mediation of what she calls urban horror—a sociopolitical public affect that exceeds comprehension and provides the grounds for possible future revolutionary dissent. She shows how documentaries, blockbuster feature films, and video art from China, Hong Kong, and Taiwan made between the 1990s and the present rehearse and communicate urban horror. In these films urban horror circulates through myriad urban spaces characterized by the creation of speculative crises, shifting temporalities, and dystopic environments inhospitable to the human body. The cinematic image and the aesthetics of urban horror in neoliberal post-socialist China lay the groundwork for the future to such an extent, Huang contends, that the seeds of dissent at the heart of urban horror make it possible to imagine new forms of resistance. END_OF_DOCUMENT_TOKEN_TO_BE_REPLACED

Below is a brief CFP for a panel being organized by a colleague (Leif Johnson, University of Kentucky Dept. of Geography) and myself (Goeun Lee, University of Kentucky Dept. of Anthropology), for the upcoming Association for Asian Studies conference in Hong Kong, June 2020. We are looking for contributions from geographers and anthropologists doing research on or around topics including the construction, maintenance, planning, or discourse surrounding Chinese infrastructure, particularly within China.

Due to the structure of the AAS’ panel organization system, the deadline for panel proposals is quite soon, and we would hope to be able to have a clear idea of who will be participating by October 25th, which will give us time to submit requests for financial support for participants who need it, and draft a fleshed-out proposal to submit to AAS by the 30th of October. If you are interested, even with doubts about timing or funding, please get back to us as soon as possible! END_OF_DOCUMENT_TOKEN_TO_BE_REPLACED 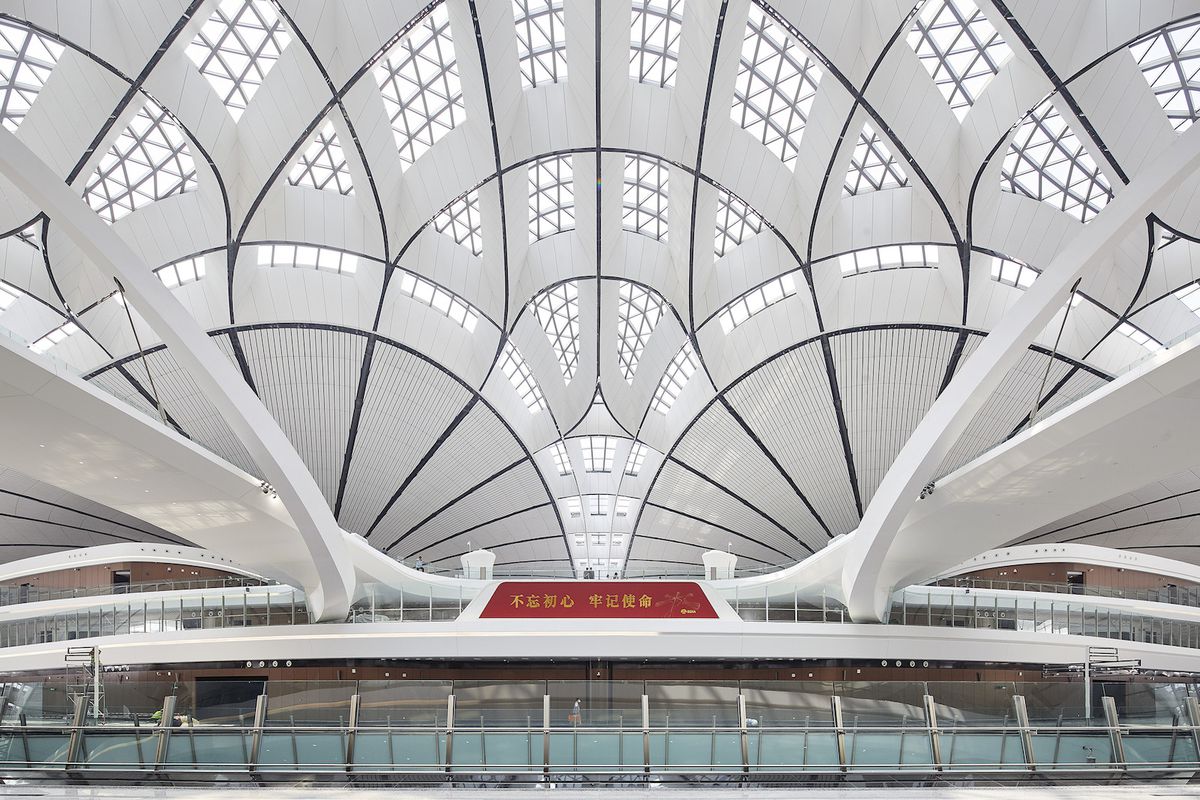 In an era of epic airport designs, Beijing is not to be outdone. The Chinese capital recently opened its newest travel hub, Beijing Daxing, a sprawling, luminous airport designed by Zaha Hadid Architects.

The 7.5 million-square-foot airport is 28 miles outside of city center and built to relieve Beijing’s existing Beijing Capital International Airport of overcrowding. The architects designed the new airport with an eye to expansion. Its starfish-shaped form will initially usher through 45 million passengers in its first year. By 2025, that number will jump to 72 million. All told, the airport will eventually service up to 100 million passengers annually. END_OF_DOCUMENT_TOKEN_TO_BE_REPLACED

Source: NYT (8/3/19)
The Forbidden City Opens Wide as China Projects New Pride in Its Past
President Xi Jinping has pushed “cultural self-confidence” as a signature policy, and one of the beneficiaries has been the former home of emperors, neglected no longer.
By Ian Johnson 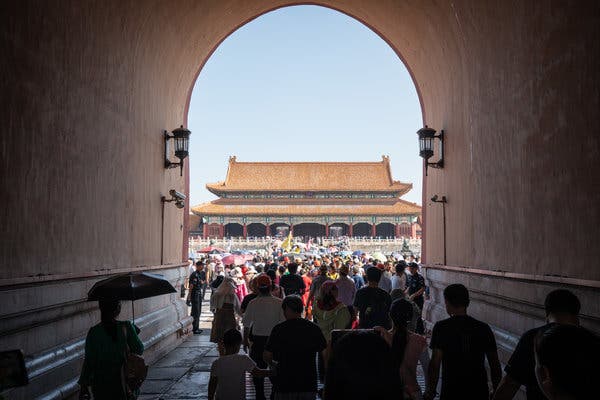 BEIJING — For much of the past century, the Forbidden City has been an imposing void in the otherwise bustling heart of Beijing.

The 180-acre compound, where emperors and their advisers plotted China’s course for centuries, was stripped of its purpose when the last emperor abdicated in 1912. Since then, the palace grounds have at times lain empty or been treated as a perfunctory museum, with most of the halls closed to the public and the few that were open crammed with tourists on package tours.

But as the Forbidden City approaches its 600th birthday next year, a dramatic change has been taking place, with even dark and dusty corners of the palace restored to their former glories for all to see. END_OF_DOCUMENT_TOKEN_TO_BE_REPLACED 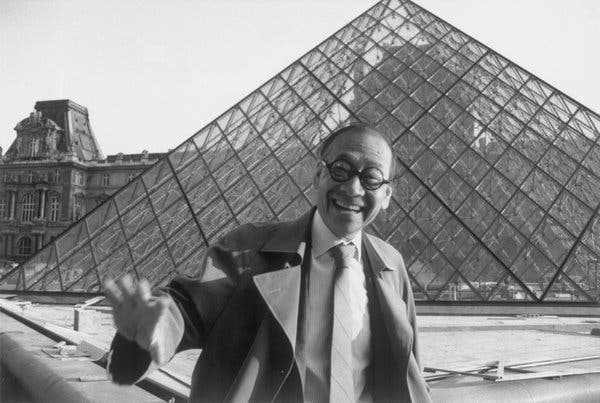 I.M. Pei in 1989 outside the glass pyramid he designed at the Louvre in Paris, one of his most famous commissions. “If there’s one thing I know I didn’t do wrong, it’s the Louvre,” he said. Credit Marc Riboud/Magnum Photos

I. M. Pei, who began his long career designing buildings for a New York real estate developer and ended it as one of the most revered architects in the world, died early Thursday at his home in Manhattan. He was 102.

His death was confirmed by his son Li Chung Pei, who is also an architect and known as Sandi. He said his father had recently celebrated his birthday with a family dinner.

Best known for designing the East Building of the National Gallery of Art in Washington and the glass pyramid at the entrance to the Louvre in Paris, Mr. Pei was one of the few architects who were equally attractive to real estate developers, corporate chieftains and art museum boards (the third group, of course, often made up of members of the first two). And all of his work — from his commercial skyscrapers to his art museums — represented a careful balance of the cutting edge and the conservative. END_OF_DOCUMENT_TOKEN_TO_BE_REPLACED 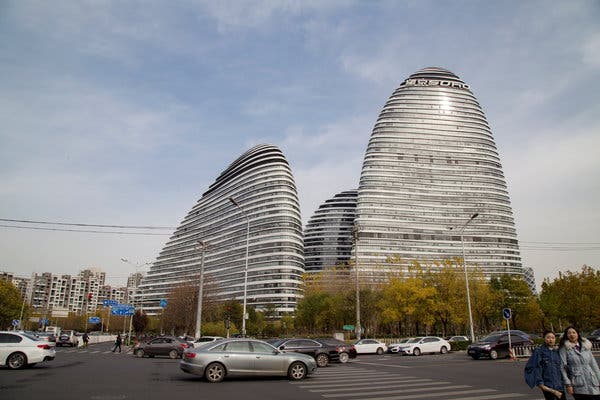 The Wangjing SOHO developed by SOHO China in Beijing. CreditImaginechina, via Associated Press

BEIJING — A Chinese court has ordered a media company to pay nearly $30,000 to a real estate developer after it published an article that suggested a flashy building in Beijing violated the ancient laws of feng shui and would bring misfortune to its occupants.

The Chaoyang District People’s Court in Beijing ruled on Wednesday that the media company, Zhuhai Shengun Internet Technology, had damaged the reputation of the building’s developers, SOHO China, one of the largest real estate companies in China. END_OF_DOCUMENT_TOKEN_TO_BE_REPLACED

The Peony Pavilion is a masterpiece by Chinese playwright Tang Xianzu (1550-1616) from the Ming Dynasty (1368-1644). A replica of the pavilion, based on pictures recorded in ancient books of the play, will appear in Shakespeare’s hometown.

Four hundred years ago, when William Shakespeare was writing his sonnets with a quill, Tang Xianzu was recording verses with a brush nearly 6,000 kilometers away.

China and Britain have hosted a series of events to commemorate Shakespeare and Tang. Among the cultural exchange contracts signed, a replica of British playwright William Shakespeare’s family house will be built in Tang’s hometown in Fuzhou, East China’s Jiangxi Province, while Fuzhou will help build the replica of the Peony Pavilion, the historical site where Tang’s story took place, in Shakespeare’s hometown. END_OF_DOCUMENT_TOKEN_TO_BE_REPLACED

Devised by world-renowned architect Moshe Safdie, it measures a staggering 1.12-million-square-meters and consists of a collection of eight towers and a gigantic connecting skybridge, which is being called a “horizontal skyscraper.”

The 250-meter-long skybridge, named Crystal, is said to be one of the world’s highest.

When open, it will have a viewing gallery, sky gardens, an infinity pool and various restaurants.

If that wasn’t enough, the skybridge also transforms into a giant light beam at night time, illuminating the sky with a rousing light show. END_OF_DOCUMENT_TOKEN_TO_BE_REPLACED 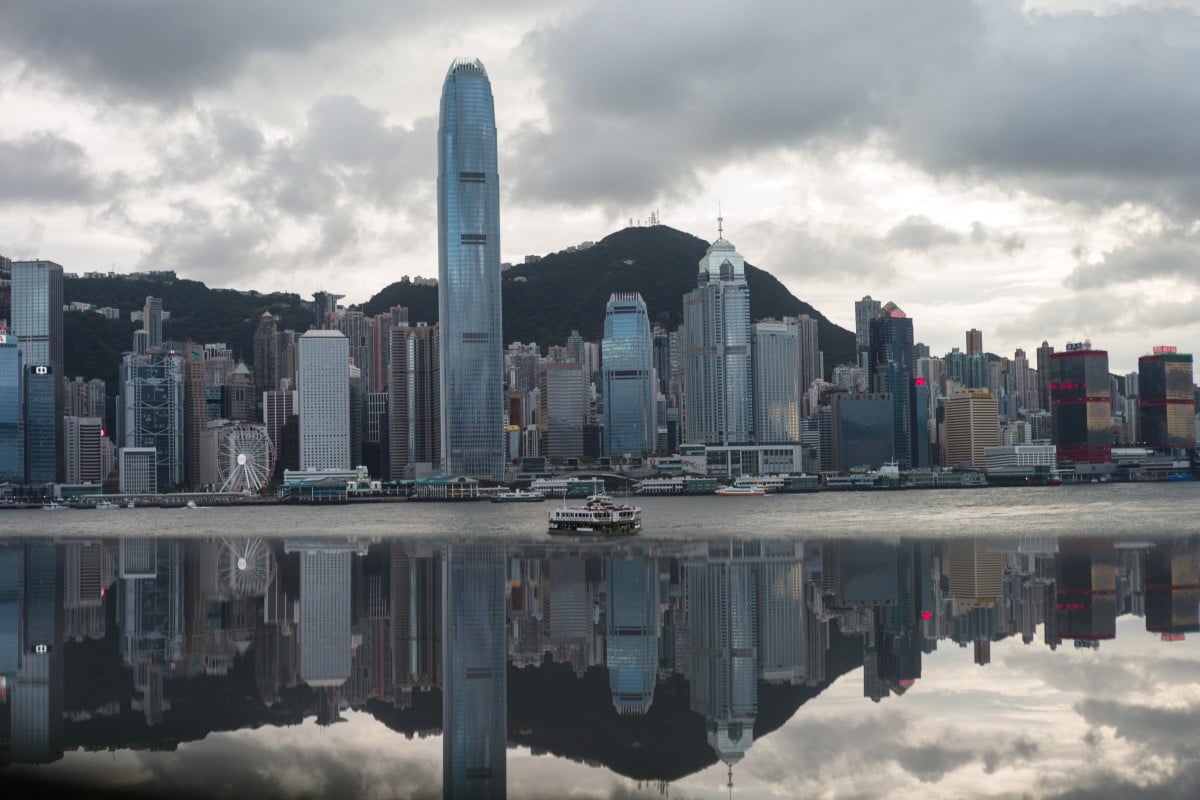 Hong Kong is positioned as the international finance, shipping and trade centre under the bay area plan. Photo: EPA-EFE

A cluster of world-class cities for work, life and leisure forms the central vision of the “Greater Bay Area” finally unveiled by the Chinese government late on Monday, laying out a road map to what it hailed as the new era of opening up.

Coming 40 years after the 1978 opening up of China, the State Council published a document setting out an ambitious plan to transform 11 cities around the Pearl River Delta into a thriving global centre of technology, innovation and economic vibrancy

The blueprint identified five “strategic orientations” that include closer integration between the mainland, Hong Kong and Macau while upholding the governing principle of “one country, two systems”. END_OF_DOCUMENT_TOKEN_TO_BE_REPLACED At the same time, ubiquitous computing has led to the rise of quantitative governance through tracking systems including social media with location services, social credit lists, app-based financial technologies, and nascent facial recognition. The boundaries of these systems are not limited by the contested borders of China: from the intensifying war on Uighurs in Xinjiang to the contested limits of offshore islands, reefs, and banks in the South China Sea; from the increasing consolidation of PRC governance in Hong Kong to the fragile independence of Taiwan; and in transnational investment, infrastructure, and peacekeeping projects in Africa, Southeast Asia, and Central Asia.

This conference brings together scholars researching the conditions of transformation in China and Sinophone worlds.”

Chinese New Year, which falls on February 5 this year, marks the year of the pig. The twelfth animal in the Chinese zodiac, the pig symbolizes wealth, success, creativity, hard work, and growth—all in all, an auspicious set of attributes that echoes the groundbreaking work demonstrated by Chinese architecture and design at the moment. To welcome the Lunar New Year, we’ve gathered 12 incredible projects by Chinese firms that are raising the bar for adaptive reuse and new builds alike.

1. Baitasi House of the Future by Dot Architects 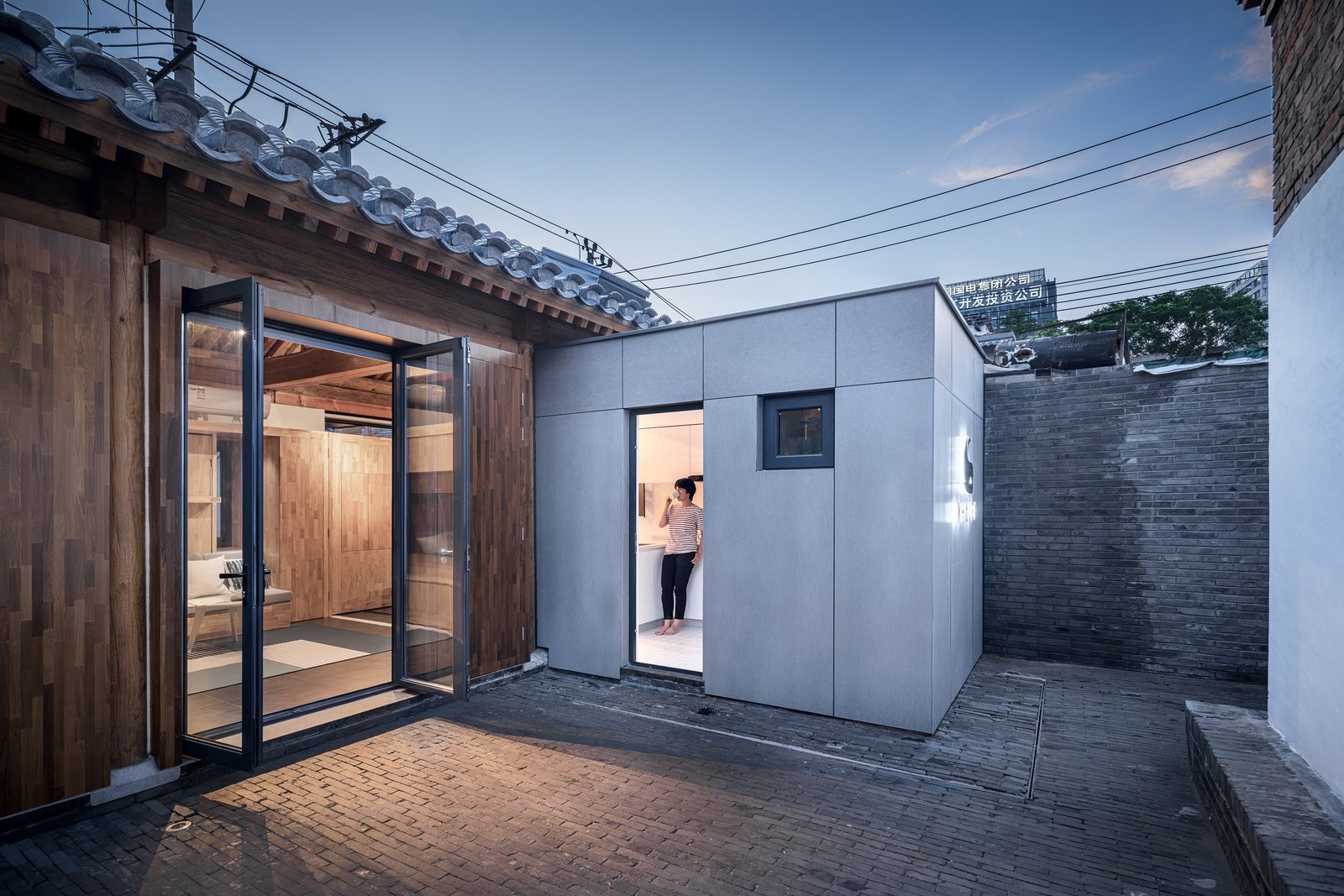 Commissioned by a tech company, Dot Architects rehabbed a historic residence, outfitting it with moveable modules controlled by a smart TV and a new extension downloaded from the WikiHouse open-source system. Photo by Wu Qingshan

END_OF_DOCUMENT_TOKEN_TO_BE_REPLACED

It might interest list members to know that the Grand Hotel in Taipei now stands on the grounds of what was once the Taiwan shintō shrine (台灣神社). I’ve never heard of the 1974 edict, if anything I would have expected such an order to come down decades earlier, maybe the 1950s? At any rate, those interested in stories like this should check out Joe Allen’s book Taipei: City of Displacements. The story of the horse in a park resonates in particular with the incomplete erasure of Japanese flags. This edited volume provides a multifaceted investigation of the dynamic interrelations between visual arts and urbanization in contemporary Mainland China with a focus on unseen representations and urban interventions brought about by the transformations of the urban space and the various problems associated with it. Through a wide range of illuminating case studies, the authors demonstrate how innovative artistic and creative practices initiated by various stakeholders not only raise critical awareness on socio-political issues of Chinese urbanization but also actively reshape the urban living spaces. The formation of new collaborations, agencies, aesthetics and cultural production sites facilitate diverse forms of cultural activism as they challenge the dominant ways of interpreting social changes and encourage civic participation in the production of alternative meanings in and of the city. Their significance lies in their potential to question current values and power structures as well as to foster new subjectivities for disparate individuals and social groups. END_OF_DOCUMENT_TOKEN_TO_BE_REPLACED

Source: Sixth Tone (11/7/18)
On the Trail of Sichuan’s Catholic Past
The remote southwestern province is home to some of China’s oldest and most well-preserved Catholic churches.
By Ma Te The southwestern province of Sichuan is situated in one of China’s most culturally, ethnically, and religiously diverse regions. Home to members of the Han, Tibetan, Hui, and Yi ethnic groups, among others, travelers to the area can find centuries-old Tibetan and Taoist temples standing alongside mosques and churches.

Of the various faiths practiced in Sichuan, Christianity stands out as a relative latecomer. The first Catholic missionary known to have reached the province was an Italian Jesuit named Lodovico Buglio, who spent much of the 1640s proselytizing there. Eventually, in 1753, the Paris Foreign Missions Society, a Catholic lay organization, took over responsibility for the Catholic missionary presence in Sichuan. By 1804, there was a small but growing community of Sichuanese Catholics, including 18 Chinese priests and four French missionaries. END_OF_DOCUMENT_TOKEN_TO_BE_REPLACED