Source: Taipei Times
Book review: Fictionalizing Taiwan’s White Terror
Political persecution is revealed as a violence that extends beyond physical abuse to a trauma that scars the soul
By James Baron / Contributing Reporter 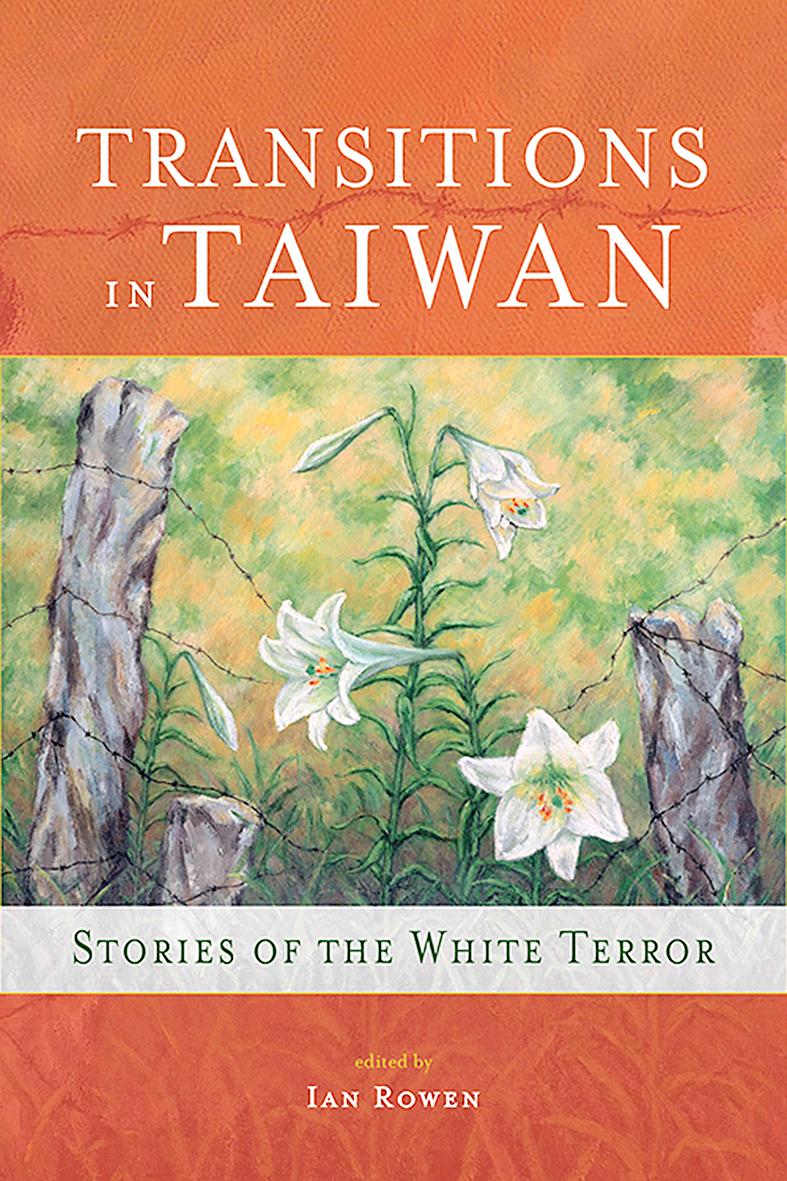 Transitions in Taiwan: Stories of the White Terror, edited by Ian Rowen.

Violence and oppression, we are told in the introduction to this collection of tales, are foundational to modern Taiwan, providing “a legacy that continues to influence its contemporary society.”

It is interesting, then, that an anthology subtitled “Stories about the White Terror,” offers few instances of physical violence, a notable exception being a neighborhood dust-up involving a gossip nicknamed Big Mouth Yang.

This incident, from Sung Tse-lai’s (宋澤萊) “Rice Diary,” is the first snapshot in a montage of quotidian happenings in the village of Daniunan (打牛湳), Yunlin County. The story forms part of a series focusing on life in this village in the 50s and 60s.

At first glance, the squabble is an insignificant personal grievance. Yet, this land rights wrangle points to something deeper. Acknowledging that he could simply divide the disputed property, Big Mouth’s assailant Ban-hok nonetheless concludes that “in this downturn, with so much craziness and thievery all around — well maybe he was thief, too.”

The implication is clear: In an era where legal and extrajudicial state expropriation underpins social transitions, anything is fair game.

Lurking in the wings, the state is a nebulous presence, poorly understood by villagers who are increasingly anxious over a potentially disastrous harvest. At one point, a flashy county bigwig shows up spewing vacuous Qin Dynasty parables at the uncomprehending peasants, but there is no explicit statement of government culpability in Daniunan’s impending ruin.

Instead, there are hints at institutional forces against which struggle is futile. These are juxtaposed against appeals for intervention from the spirit world, with the villagers concluding that an outwardly successful former resident is the incarnation of a divinity, returned to answer their prayers.

But this apotheosis is exposed as sham, the prodigal son Lim Baiyi proving a false idol, transplanted from the shrine of industrial capital to preach a faith far more pernicious than the charlatanry of Brother Rat, the hapless village medium.

Elsewhere the violence is mental. Four of the six tales involve imprisonment or persecution, and here the transitions extend beyond social change to pose existential questions.

Prison, in Vaclav Havel’s words, is “no longer based on physical suffering … but on something worse: systematic, everyday, round-the-clock assault on man’s psyche,” the effects of which serve as “a futurological laboratory of totalitarianism.”

This is particularly evident in the opening story, “Long, Long Ago There Was a Urashima Taro,” by Chu Tien-hsin (朱天心). In this reworking of a Japanese folktale — a detail surprisingly omitted from the introduction — the protagonist Li Jiazheng (李家正) suffers from a persecution complex following 30 years as a prisoner on Green Island.

Seeing stool pigeons on every corner, Li changes his routine to throw them off the trail; ignoring derision from family who insist there are “a million Taiwanese ahead of you” on any supposed government shit-list, Li uses Japanese to evade imagined wiretaps; penning protests and denunciations to everyone from academics to Chiang Ching-kuo (蔣經國), he scents conspiracy in unanswered correspondence.

On discovering a box full of letters he had written to his family during his decades locked down, Li is dismayed to find them unopened. Reinforcing his sense of dislocation, the realization that life has moved on without him is more painful than any blow from a warden’s cudgel.

Elsewhere, “Dixson’s Idioms” takes an ontological tack in examining the relationship of language to being. Each episode in a series of transnational tales begins with an entry from a phrasebook of the sort that first became popular in Taiwan through translations of the work of the American Robert Dixson, known for developing English-learning materials aimed at Latin American migrants.

An explicit theme is the emancipatory potential of language, most obviously through reflections on Martin Luther King, Jr.’s oratory. However, it is through its affirmation of human existence that language exerts its most profound influence. Considering the case of an illiterate inmate, Ko reflects that, “with no words to jump out … [y]ou could even reduce yourself to nothing more than a lamp, a wall, a tiny cell.” In such demoralizing circumstances, such a retreat from self, Ko observes, might be preferable.

Ostensibly examining identity in Taiwan through the versions of a supposedly quintessential dish, “Beef Noodles” again emphasizes the toll exacted on political prisoners. Inmates speculate about where they are being held, “to convince themselves that they still existed.”

The most structurally challenging story is Wu He’s “My Second Brother the Deserter,” the anthology’s final selection. Here, again, existential angst pervades the text to the point that it becomes unclear not only which of the brothers — the narrator or the absconding soldier — is freer but whether they might even be one and the same.

This collection is not without issues: typos, changes in the rendering of names (sometimes within a couple of sentences) and jarring language choices. These quibbles aside, this is a thought-provoking addition to the expanding canon of White Terror-era literature in translation.