Source: The Guardian (9/27/20)
‘Back where we were’: history repeats for Hong Kong’s freedom swimmers
They risked their lives in search of liberty in the British colony – now the system they were desperate to escape is at the door
By Verna Yu in Hong Kong 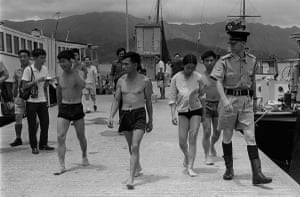 Four ‘freedom swimmers’ from China are led away by Hong Kong police for questioning at Tai Po Kau on May 31, 1971. Photograph: SCMP

They came one by one, dragging themselves from the sea on to the shores of Hong Kong over oyster beds, their bodies bleeding. Some had swum for miles, braving choppy, treacherous seas, tied together by ropes. Others made the desperate journey in makeshift boats.

They were known as freedom swimmers – hundreds of thousands of young men and women who fled mainland China and risked their lives in search of freedom in the British colony amid the oppressive political movements in China between 1950 and 1980, which targeted “class enemies”.

Those who survived to tell their tales were the lucky ones. Many more never made it. Some were shot dead by border guards, or arrested and sent to labour camps. Others drowned or were attacked by sharks. Some were executed – the act of defection was considered treason.

The ones who managed to reach Hong Kong, now in their 70s and 80s, have enjoyed decades of civil liberties unheard of on the mainland – the right to air their views, access uncensored news and information online as well as the freedom to demonstrate.

Until now. Three months ago, China imposed a national security law (NSL) on the region in response to months of pro-democracy protests. The change in Hong Kong has been swift and brutal.

Dozens of activists and dissenters have been arrested. Police have raided an opposition newspaper office and arrested senior staff. Outspoken media outlets have been censured. Books have been pulled from public libraries. Schools and universities have been ordered to promote “national security education”, dismissed liberal-leaning staff and textbooks have been censored. Independence slogans are banned and scholars, journalists and everyday citizens suddenly find themselves afraid to speak out about politics. Several pro-democracy figures have been forced to flee overseas, while some didn’t make it.

The implementation of the law has been particularly painful for the freedom swimmers, who now fear the system they risked everything to escape is suddenly at the door.

‘The free world would be my rebirth’

Hon Man Po came to Hong Kong from China in 1968, after years of trying. In 1966, he swam for six hours in the dark from the mainland to Macau and stayed just long enough to make enough money to take an illegal boat journey to Hong Kong. On the gruelling journey he was sustained by one thought: “The free world would be my rebirth.”

Hon now fears the very things that made Hong Kong a safe haven for refugees like himself – freedom of speech and expression – are quickly disappearing. The vagaries of the law, which prohibits acts of secession, subversion, terrorism and collusion with foreign forces, mean its reach and power remain unknown.

“Freedom is like sunlight and air,” he told the Guardian. “When information and press freedoms are suppressed, then many areas will wither.”

“The precious thing about Hong Kong was its liberal environment where all kinds of opinions could be aired,” Hon said. “But now, many people are afraid to speak out. Living under fear is painful and humiliating.”

Hon’s only ambition as a young man was to leave China. He often went hungry during his time at university between 1958 and 1962, when Mao Zedong launched the Great Leap Forward that resulted in nationwide famine. His studies had been interrupted when students were drafted to build railways, make steel in backyard furnaces and work on farms. 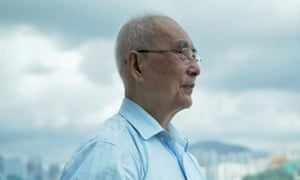 Hon Man Po came to Hong Kong from China in 1968, after swimming for six hours in the dark. Photograph: Yuling Chow/The Guardian

After eventually graduating, he found the suffocating atmosphere of intensified “political struggles” unbearable. As someone belonging to the condemned “landlord class with overseas ties”, Hon was sent to a remote island off the southern coast of China to be a teacher, where he was often criticised for his “bourgeois” thinking.

He tried to escape twice before 1966, the first time he was driven back by a typhoon after hiding in the mountains for 10 hours, the second time he was bitten by a guard dog and detained for months. Now he sees his raw desperation in the actions of Hong Kong’s youth.

Twelve Hong Kongers, including a young activist charged under the national security law, were detained by China’s coastguard while trying to flee to Taiwan in late August. Others have fled to the UK and the US, while many residents say they plan to emigrate out of fear their children will grow up under the communist party’s political indoctrination.

“If I couldn’t leave, that would be the end of my life … I had no choice but to flee,” said Hon, now 82. He cherished his new-found freedom in Hong Kong, where he worked in a textile factory at first, but eventually became a freelance writer, founded his own magazine and authored dozens of books.

“It was a relief to be able to write freely. I bottled up a lot of anxiety when I was in China so had lots to get off my chest,” said Hon, also known by his pen name Hon San Pik. “Hong Kong was a place of rebirth and opportunity for me. There was freedom and tolerance, and you could do what you like. I wanted to be a writer and it was impossible in China.”

Rights advocates say the national security law marks Beijing’s most aggressive assault on the city’s freedoms since it was transferred to Chinese control in 1997. Many believe things will only get worse.

“The national security law represents a whole-of-society onslaught on Hong Kong,” said Prof Victoria Hui, a political scientist at the University of Notre Dame in the US. “In silencing all dissent, Beijing is rapidly dismantling the city’s once competent, efficient and impartial institutions.” 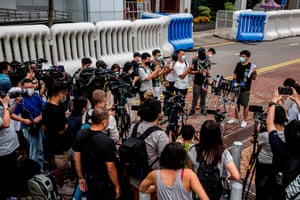 Pro-democracy activist Joshua Wong speaks to the media after being arrested for unlawful assembly related to a 2019 protest against a government ban on face masks. Photograph: Isaac Lawrence/AFP/Getty Images

“The way the national security law was introduced marked the end of the Chinese government’s consistent commitment, or pretence, that it would adhere to the Basic Law,” said Prof Steve Tsang, director of the Soas China Institute in London, referring to the mini-constitution put in place after the handover of sovereignty from Britain to China. “If the same trajectory continues for the next 20 years, Hong Kong will have a new generation who would not know what the current younger generation knows, and may not be fighting for the same. That seems like Beijing’s long-term game plan.”

The Hong Kong government has said the national security law will not undermine the city’s legal or judicial systems, and residents’ civil rights guaranteed under the Basic Law and international treaties remain protected. It is “vital in bringing Hong Kong back on track and safeguarding our country’s sovereignty, security and development interests,” a statement given to the Guardian said.

“The lawful rights and freedoms of our law-abiding and peace-loving citizens, investors and travellers are not affected,” it said.

Many others who illegally escaped from China to Hong Kong in the 1960s and 70s share Hon’s sentiments, but having lived under communist rule, most feel uncomfortable talking on the record about the national security law.

Chow Ming Fai*, 73, a former red guard in the Cultural Revolution who swam for six hours across 12km of the Dapeng Bay to reach Hong Kong in 1973, says it breaks his heart to see the legislation destroying the rights and freedoms that made Hong Kong a safe haven for him nearly 50 years ago. 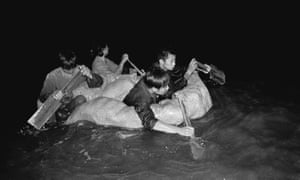 Many freedom swimmers used anything that would float to escape from the rigours of the Cultural Revolution in the 1960s Photograph: South China Morning Post/Getty Images

“We’re quickly losing our sense of freedom. Just the fact that I don’t feel comfortable talking to you on the record attests to that,” he said. “Hong Kong sheltered escapees like us but now it’s no longer free … We struggled so hard to come here and now they are turning it into China.”

In 1968, he was one of more than 16 million youngsters sent to the countryside during the Cultural Revolution. The prospect of being stuck there for the rest of his life made him flee.

In 1973, he and his girlfriend walked for days in the wild, hiding in hillside bushes until night and hiking in the dark. They survived on their only food – balls of flour mixed with oil and sugar – until they reached the seaside in what is now the boomtown of Shenzhen. Armed with a floating ring, they tied themselves together with a piece of rope and went into the sea. Braving huge waves for six hours, they landed in Hong Kong and were taken in by a sympathetic villager. 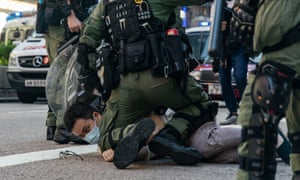 A man is arrested during an anti-government protest in Hong Kong. Freedom swimmer Wong Hung said he could identify with the protesters. Photograph: Anthony Kwan/Getty Images

“We wanted to go to Hong Kong, not just to fill our stomachs, but for freedom,” said Chow.

“Whatever the propaganda said, we knew they had plenty of food because our relatives sent us food parcels when we were starving,” he said.

Now Chow says he could foresee in the thick of the protest movement that raged across Hong Kong in 2019 that China would hand down heavy punishments to what it sees as the “rebellious son”, but few people expected measures as harsh as the national security law. “China had never been humiliated so much by a place under its rule, it would be deeply resentful and vengeful,” he said.

Still, he blamed China for failing to fulfil the promise of granting genuine universal suffrage to Hong Kong for its long-drawn-out political crisis. Pro-democracy protests, sparked by a controversial extradition law that could see individuals sent to mainland China for trial, started off peaceful last year but turned violent as frustrations mounted.

“They issued a blank cheque. The Communist party is not trustworthy,” he said. “Young people are only fighting for what they have been promised.”

Wong Hung*, who escaped to Hong Kong in a wooden boat in 1970, said the national security law amounts to the second handover and Hong Kong is effectively no longer ruled under the “one country, two systems” policy. “Hong Kong might have returned to China and it’s now ‘one country, one system’, but people’s hearts have not returned,” Wong said.

He said he could identify with the young Hong Kong activists who had to flee. When he set foot in Hong Kong after surviving high waves and a police boat chase, he shed tears at the thought that he might never see his family again.

“Like us back then, they could never return,” he says. To Wong, it was poignant that the place where he found freedom has become the place that his children are considering leaving. “All those years ago I risked my life to come here, and now I’m old, we’re back to where we were,” he said. “We’re reverting back to the Cultural Revolution.”

“This is very painful for me.”

* Names have been changed to protect their identity