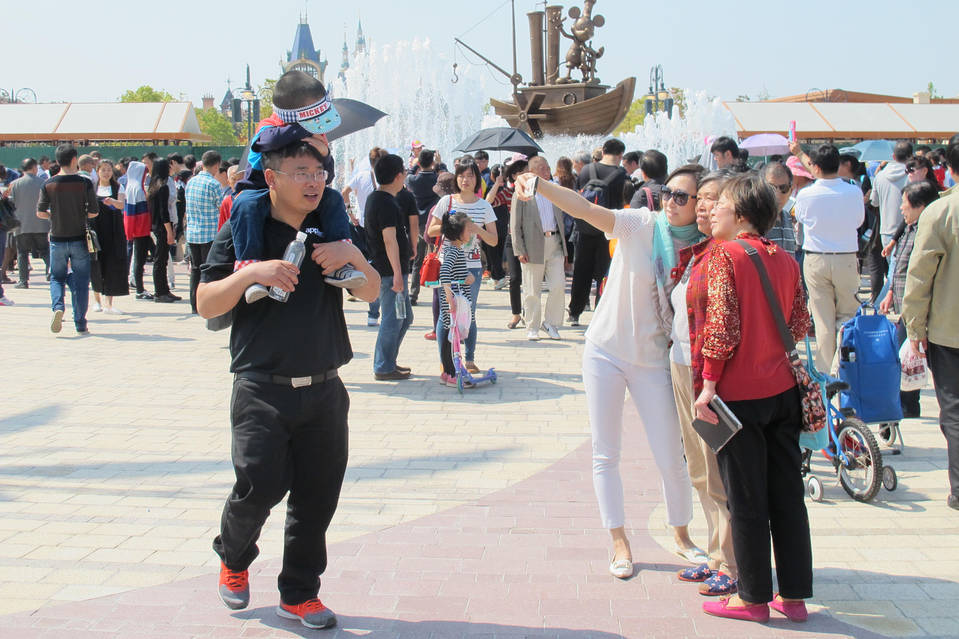 Around six weeks before Shanghai Disneyland is due to open its gates, visitors by the thousands each day are strolling the grounds around it. Selfies at a fountain featuring Steamboat Mickey are popular. PHOTO: JAMES T. AREDDY/THE WALL STREET JOURNAL

SHANGHAI—On her weekend off, saleswoman Liu Jiahui and a couple of friends rode the subway for two hours and then waded through thick crowds to experience China’s newest theme park: Shanghai Disneyland—some six weeks before it officially opens.

Disneyland’s periphery is drawing thousands of people daily, as anticipation builds for the park’s long awaited opening in mid-June. Some, like Ms. Liu, rode the subway to a newly opened jumbo-size station with colorful silhouettes of Mickey Mouse on its escalators. On a multilane boulevard that passes yet-inaccessible Toy Story Hotel, a Rolls Royce was among the cars stuck in a crush of Saturday traffic that included cement mixers and utility trucks. Last week, a Shanghai air carrier said it began flying a Disney-themed Airbus A330.

The visitors are locals and tourists, including 23-year-old Liu Haiyan who ranked the proximity of Disneyland as a Shanghai must-see during her three-day trip from Anhui province. The college student, with parents in tow, peeked through a gap in green tarp to glimpse the world’s largest Disney Castle. “Very good,” she said, though hesitating when asked whether she would return later as a ticketed visitor. “A little bit expensive.” 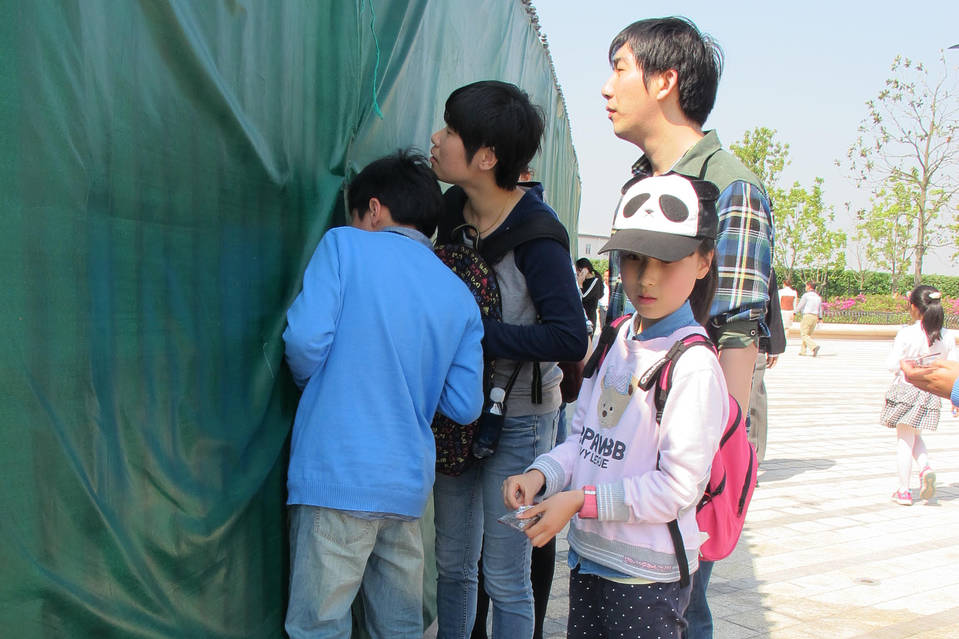 “While we are several weeks away from our official opening, we have been impressed with the enthusiasm and excitement of our first guests,” said a spokesman for the park, run by California entertainment giant Walt Disney Co. and a group of Shanghai government companies. “The volume of guests is within our expectation and confirms our confidence in the local tourism and leisure market.”

Disney appears to be bracing for high demand initially. Peak pricing around $76 will apply during the half-month grand-opening period starting June 16, before falling to $57 for regular adult admission. Also, tickets trading online suggest premium prices for entry to trial park operations beginning May 7.

Some visitors over the long holiday weekend said increasing media coverage made them curious to tour the newly accessible and free “Disney Small Town,” as the resort’s Disneytown commercial zone translates in Mandarin. Disneytown is part of the $5.5 billion Shanghai Disney Resort, though it is technically outside the Disneyland theme park.

Families with children and elderly couples took selfies around a fountain featuring Steamboat Mickey in front of the park’s covered main gate. A hundred meters of crowd-control barriers guided a steady stream of visitors along the resort’s lakeside and over a winding red bridge toward Wishing Star Park.

Many visitors held umbrellas against the bright sun, as they strolled past Disneytown’s unopened stores, one of whom had a Lego airplane popping out of the top. The only people inside restaurants were waiters getting trained. Sightseers peeked in windows and took more selfies at the entrance to Walt Disney Grand Theater, where billboards tease coming performances of a Mandarin version of the “Lion King” musical.

Sweepers in white and blue grabbed trash as it hit the pavement. Security staff at times struggled to keep short-cutters from trampling plants. For every complaint about parking at $9.25 a day, visitors had positive comments about the clean toilets and free water. In the only business going, kiosks did brisk sales of ice pops.

The hype confused some. “Nothing up there,” said a woman after pressing for a look at a belfry decorated with mouse ears.

The spokesman said there is a broad understanding that most facilities aren’t opened yet. For many, Shanghai Disneyland has been a long wait. 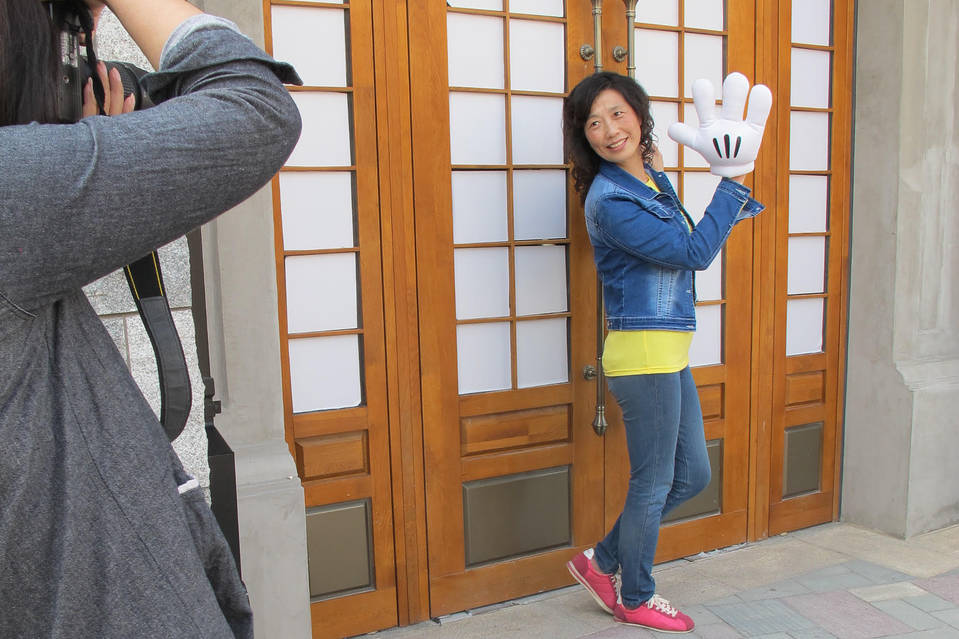 “My name is Mickey,” 53-year-old Wang Jianqing said jokingly, waving a thick white glove like the one worn by Mickey Mouse. A park attendant had lent it to her. “If anyone wants to borrow the glove, I’ll let them—and a lot do,” the young man said.

As Ms. Wang and two girlfriends took photo after photo at the closed entrance to a Chinese restaurant, she said she had visited the “cute” Tokyo Disneyland once and is excited Shanghai’s park will be much larger. “I feel like I’m kind of older and I want to grab the tail of youth,” she said.

Gripping a Disneyland map and her iPhone, saleswoman Ms. Liu said she would return, despite the long subway journey. “I had wanted to take a picture with the two Mickeys,” said the 21 year old, referring to Mickey and Minnie Mouse. “I only saw the glove.”