In Praise of Hu Feng
Writer Hu Feng put a special emphasis on the energy and power generated from within the subject, which constituted a major schism in ideas formulated by the Yan’an Talks
By Sheila Melvin 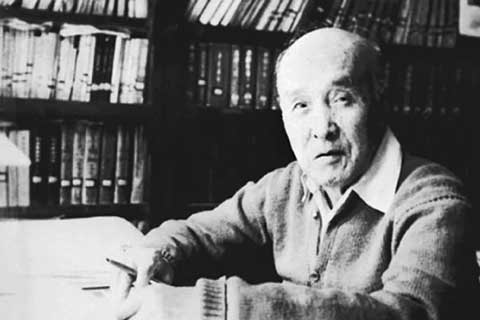 Hu Feng (1902-85) is a name that most students of PRC history have undoubtedly encountered at one time or another. I remember reading it for the first time years ago in Jonathan Spence’s “The Search for Modern China.” It stuck in my mind because back then I found it incredible that a nationwide campaign could have been launched against a lone writer who was himself a loyal member of the Communist Party, his only “crime,” in essence, to suggest that China’s creators and consumers of culture needed a little space in which to breathe.

Later, I heard Hu’s name in a more personal way from my friend and teacher Gui Biqing, because her beloved younger brother, Wang Yuanhua, had been an associate of Hu’s, both men active leftist writer/critics from Hubei working with the League of Left-Wing Writers in pre-liberation Shanghai. One day in 1955, Shanghai’s chief of police asked Wang to admit that Hu was a counter-revolutionary – warning Wang that if he did not, the consequences would be “severe.” Wang spent a long sleepless night in detention and the next day told the police chief that he did not consider Hu a counter-revolutionary. He was thus declared a member of the “Hu Feng counter-revolutionary clique” and jailed for the prime of his life; his wife was punished, too, and later, in the Cultural Revolution, even his sister, my teacher, was locked-up for eight months.

But, beyond the bare bones of his case and my teacher’s stories, I knew little about Hu Feng and always felt that I should learn more. The opportunity recently presented itself when I came across Gregor Benton’s 2013 English translation of “F: Hu Feng’s Prison Years,” a 1989 memoir by Mei Zhi – Hu’s wife, an established writer in her own right – that recounts in gripping, heartrending detail the Kafkaesque detentions, disappearances, and arrests to which her husband was subjected by a Communist Party so intent on crushing those who refused to tow its line that it ate its own, destroying the best and brightest intellectuals of an era.

Hu Feng was a product of the May Fourth Movement and a disciple of Lu Xun, a committed leftist who believed that literature should inspire social transformation and reflect reality, but who also insisted on the role of the individual in the creative process. In the lingo of the era, he supported “subjectivism” and argued that artists and writers should not be dictated to and controlled by political bureaucrats – instead, they should be granted some autonomy so they could actually be creative.

This stance earned him enemies early on – well before 1949 – but he refused to back down, instead warning that a blind insistence on obedience to Party dictates would turn China into a “cultural desert” and founding several literary journals – like “July” and “Hope” – in which he promoted the works of like-minded young writers (among them the poet Ai Qing, the father of Ai Weiwei). Hu’s beliefs became increasingly problematic after Chairman Mao gave his speech at the Yanan Forum on Arts and Literature, in which he decreed that “There is no such thing as art for art’s sake, art that stands above classes, art that is detached from or independent of politics” and after which the Party began exerting ever tighter control over writers, artists – and the individual in general.

Nonetheless, Hu survived the transition to the PRC and was appointed to the editorial boards of the prominent journal People’s Literature and the Chinese Writer’s Union. He used these positions to promote professionalism, criticize the nation’s stagnating intellectual life, and decry the idea that writers could only focus on the lives of workers, peasants and soldiers – didn’t other people’s lives matter, too? In March of 1954, he drafted a 300,000 word “Report on the Real Situation in Literature and Art Since Liberation” and submitted it to Xi Zhongxun – the father of current president Xi Jinping, who then supervised cultural policies for the Party – who reportedly welcomed it. For good measure, Hu appended a long letter to the Politburo complaining that he had been ostracized and deprived of his right to work, and asking them to intercede.

Chairman Mao did not respond well. On the contrary, he personally helped launch a campaign against “Hu Fengism,” which was rolled out nationwide to drill home the dictate that every individual must subsume his will to that of the Party and the State. Members of Hu’s “clique” – most of whom he had never met – were rounded up and arrested. Hu and his wife were taken away in the middle of the night while their three young children slept – she was imprisoned for 70 months and he for 10 and a half years. Mei Zhi’s account opens at this point, in 1965, when she has heard nothing from her husband for a decade and fears he may be dead – but he isn’t.

Out of the blue, she is informed that she can visit him at Qincheng Prison. “Ten years without ever seeing someone dear to you. What will he be like? Will he be the man of my dreams? Will I recognize him?” They talk about family and, inevitably, politics, since she is under intense pressure to make him confess and repent, even though she knows he won’t – “Hu Feng didn’t know how to play it safe and always ended up saying what he thought, so he became the victim of an unprecedented onslaught.” Hu bemoans all the people who were implicated and suffered because of him but steadfastly maintains his innocence. “I was always being told to confess but I had nothing to confess,” he tells her at one point, at another, “I have not lost faith in the Party.”

The visits continue – she brings food, but he wants books, so she lugs him a Japanese edition of the complete works of Marx and Engels – and finally he is released. He sees his children, now grown, they celebrate Chinese New Year and plan to rebuild their lives. The reader sees the Cultural Revolution coming like an impending train wreck, but they do not. They are sent to Sichuan – for their own safety – and live in exile, carving out a life together even as they are sent to ever more remote areas. Then, in 1967, Hu is arrested again and Mei Zhi is left to fend for herself in a mountain prison camp. When Hu is returned to her five years later, he is a man broken in body and spirit, afraid even to eat a tangerine: “If I eat that, they’ll denounce me.” He leaps to attention in the middle of the night, calls himself a murderer, spy and traitor and becomes increasingly paranoid. “I would restore him,” Mei Zhi vows. She makes progress, but after the death of Zhou Enlai, which leaves him sobbing, he worsens, hearing voices talking to him through the air and threatening her with a kitchen knife while imagining he is trying to save Chairman Mao. She begs him to recover: “If you can survive, we will have won. You must live.”

He does live, he is freed, he is exonerated. And then his body betrays him, just as his Party had, cancerous cells devouring his heart. “How he longed to stay alive!” Mei Zhi, ever faithful to the man for whom she has sacrificed so much, promises him, posthumously, to “spend the rest of my life washing the remnants of dirt from your face and showing your true features to the world!”

Mei Zhi is gone, but her mission remains important – Hu Feng still matters and his case is well worth our study. Artistic and literary expression still sometimes get writers and artists detained, and jailed – and, in the worst cases, innocent spouses suffer too, just like Mei Zhi. Hu’s ideas also remain critically important. Debates between those who advocate the May Fourth Spirit and those who prefer something closer to Mao’s Yanan vision remain very much alive – and Yanan, in recent years, is gaining ground. President Xi has called for “innovation, innovation, innovation” and the Chinese government has done much to promote the creative arts. But history has proven that Hu was correct – real innovation and creativity can happen only when artists and innovators are given the space and the freedom to test their own ideas, express their own creativity, and make their own mistakes, without fear of punishment. We should all continue to support Mei Zhi’s quest, and learn from Hu Feng.

Sheila Melvin is a newspaper columnist