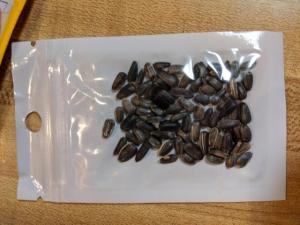 to have originated from China. The types of seeds in the packages are currently unknown and may contain invasive plant species. Similar seed packets have been received recently in several other locations across the United States.

If you receive a package of this type, please DO NOT plant these seeds. If they are in sealed packaging, do not open the sealed package. You can report the seeds to ODA online here or you may contact the United States Department of Agriculture (USDA) Animal and Plant Health Inspection Service (APHIS) Anti-smuggling Hotline by calling 800-877-3835 or by emailing SITC.Mail@aphis.usda.gov. Also, if possible, please retain the original packaging, as that information may be useful to trade compliance officers as they work through this issue. END_OF_DOCUMENT_TOKEN_TO_BE_REPLACED

Under the Clean Water Act, a TMDL is a calculation of the maximum amount of a substance (in this case phosphorus) that is allowed to enter a body of water and meet water quality standards for that pollutant. The TMDL sets a reduction goal for that pollutant for each source, such as agriculture, municipal wastewater, developed land, and septic systems.The Clean Water Act directs the state to submit a 303(d) list to U.S. EPA every two years. A TMDL must be developed for all waters identified by a state on their 303(d) list of impaired waters, according to a priority ranking on the list. END_OF_DOCUMENT_TOKEN_TO_BE_REPLACED

Little snow, warmer days — it’s been an unusual winter. Or has it?

On average, Ohio’s annual rainfall has increased 5% to 15% since the early 1900s, with the largest increases in areas such as north-central Ohio where fall rainfall has risen by 31%, Wilson said. END_OF_DOCUMENT_TOKEN_TO_BE_REPLACED

Lake Erie wasn’t as bad as expected. What? We missed 1.5 million acres of crops, and from my eye mostly in northwest Ohio. But here is the deal: you did apply fertilizer last year, and probably the year before. We farm in a leaky system and I learned this week that entropy is working against us — meaning it will get more random. So, yes it’s leaky and will perhaps get a little more leaky. We did not plant as many crops and yes we applied less fertilizer in the Lake Erie basin, but the leaks still happen even without the crop because we still have rain, and rain moves that little tiny bit of phosphorus off your farm and downstream. END_OF_DOCUMENT_TOKEN_TO_BE_REPLACED

Since Chronic Wasting Disease (CWD) first emerged in captive deer in Colorado in the 1960s, the prion disease has spread to at least 26 states, three Canadian provinces and several countries in Europe. While the fatal disease continues to spread, fears that it could cross species barriers to affect livestock or humans have, so far, not come to fruition.

Results of a long-term exposure trial, reported in 2018 in the Journal of Wildlife Diseases, for example, support the belief that the lethal prion disease is highly unlikely to spread to cattle. END_OF_DOCUMENT_TOKEN_TO_BE_REPLACED

Earlier this month, Emerald Ash Borer University (EABU) hosted an online webiner entitled, “Putting Ash Wood to Good Use – Lessons from the Urban Wood Network.” While many of us from Ohio have already lived through the devastation of EAB; some may have utilized the ash, some may have not, but either way, you will enjoy the webinar presented by Don Peterson, executive director of the Urban Wood Network to learn more about what is happening in this arena across the county when it comes to urban wood utilization.

All EABU sessions are recorded and posted on the EABU You Tube Channel following the live presentation.

To check out the Urban Wood Utilization session, check out this link: https://www.youtube.com/watch?v=SrksAL-mGfM&feature=youtu.be

To learn more about EABU and look at past session, or view a calendar of upcoming sessions, you can explore on the EABU webpage on the Regional Emerald Ash Borer website, http://www.emeraldashborer.info/

By: Peggy Kirk Hall
Source: https://farmoffice.osu.edu/blog
Large “utility-scale” solar energy development is on the rise in Ohio.  In the past two years, the Ohio Power Siting Board has approved six large scale solar projects with generating capacities of 50MW or more, and three more projects are pending approval.   These “solar farms” require a large land base, and in Ohio that land base is predominantly farmland.   The nine solar energy facilities noted on this map will cover about 16,500 acres in Brown, Clermont, Hardin, Highland and Vinton counties.  About 12,300 of those acres were previously used for agriculture.

END_OF_DOCUMENT_TOKEN_TO_BE_REPLACED

The caterpillar feeding frenzy has ended for the year and adult activity is being observed in NW Ohio. The male moths have taken flight in their zig-zag pattern in hopes of finding a mate. The female moths are white and a bit larger in size, and typically don’t move far distances from the pupal casing that they emerged from. She gives off a pheromone to alert close by males of her location. After a visit from the male moth, she will begin laying eggs. The mass of eggs laid now, will remain in that stage until the following spring, as there is one generation per year. END_OF_DOCUMENT_TOKEN_TO_BE_REPLACED

A confounding new disease is killing beech trees in Ohio and elsewhere, and plant scientists are sounding an alarm while looking for an explanation.

In a study published in the journal Forest Pathology, researchers and naturalists from Ohio State University and metro parks in northeastern Ohio reported on the emerging beech leaf disease epidemic, calling for speedy work to find a culprit so that work can begin to stop its spread. END_OF_DOCUMENT_TOKEN_TO_BE_REPLACED

The next deadline for Conservation Stewardship Program (CSP) applications to be considered for funding this year is May 10, 2019. USDA’s Natural Resources Conservation Service (NRCS) plans to invest up to $700 million for new enrollments and contract extensions in fiscal year 2019. The 2018 Farm Bill made several changes to this critical conservation program, which helps agricultural producers take the conservation activities on their farm or ranch to the next level. END_OF_DOCUMENT_TOKEN_TO_BE_REPLACED