The past week has been prime time to complete many field operations in the county and across the state. The dry weather has kept machinery in farm fields as producers side dress corn, apply pest control, and cut hay. Before long wheat harvest will be upon us as we are usually a couple weeks behind southern Ohio, where they are getting close to harvest.

We received many reports of true armyworm infestations in wheat, barley, and corn in NW Ohio. The following is from this week’s C.O.R.N. newsletter on the pest. “These are black or green caterpillars with stripes along the side and orange heads.  In the spring, true armyworm moths migrate from the south and lay eggs in grasses such as forage and weed grasses, winter wheat and barley, and rye cover crops.  When the eggs hatch, the larvae can significantly damage wheat and barley before then moving to young corn. END_OF_DOCUMENT_TOKEN_TO_BE_REPLACED

The publication relies on Ohio-generated data from 198 farmer-coordinated, on-farm trials in 39 Ohio counties and long-term plots at OARDC Ohio Agricultural Research and Development Center Agronomic Research Stations conducted from 2006-18. This data validates the recommendations against modern hybrids and varieties and agronomic management practices under current weather conditions. Key recommendations from the guide are included here. END_OF_DOCUMENT_TOKEN_TO_BE_REPLACED

Across the state, soybean growth and development is variable, ranging from early vegetative stages to flowering. However, there has been some confusion regarding the identification of the VC and V1 growth stages. This confusion is mostly due to two definitions of V1…that actually mean the same thing. The Fehr and Caviness Method (1977) is based on the number of nodes that have a fully developed leaf, whereas Pederson (2009) focuses more on leaf unrolling so that the leaf edges are no longer touching. The VC definition for both methods is the same, but the differences start to appear between the methods at V1. END_OF_DOCUMENT_TOKEN_TO_BE_REPLACED Oats is traditionally planted as the first crop in early April as a grain crop or an early season forage. One of the beauties of oats is its versatility in planting date. Oats can also be planted in the summer as an early fall forage for harvest or grazing.

Usually the best scenario for growing oats for forage is to plant them into wheat stubble, which is normally available by mid-July at the latest. However, the typical recommendation is to plant oats between August 1st and 10th to maximize tonnage and quality, since the shorter day length triggers oats to grow more leaf instead of producing seed, but if planted too late in the year, there is not enough time for growth. The oats in this study were harvested between 60 and END_OF_DOCUMENT_TOKEN_TO_BE_REPLACED

In low margin businesses such as cow/calf ranching, taking advantage of every profit-enhancing tool in the tool box is important to long term success and survival.

Well-defined 60-day breeding and calving seasons will pay off in heavier, and more uniform groups of calves to sell at marketing time.  If a small cow operation can market a sizeable number of calves together in one lot, it will realize a greater price per pound (on the average) than similar calves sold in singles or small lots.  Proof of this concept has been reported in at least 5 different states.  Studies in Kentucky, Arkansas, Texas, Oklahoma and Arizona have shown advantages in sale price for uniform lots of calves compared to singles and small lots (5 or less). END_OF_DOCUMENT_TOKEN_TO_BE_REPLACED

Last week I finished up with a paragraph on Poison Hemlock, a noxious, invasive weed that is starting to be more prevalent across the county. Perhaps it is coincidence, but the majority of questions this past week have been about Poison Hemlock, the challenge it presents, and control. So let’s review:

Poison Hemlock is a noxious weed that is extremely toxic to livestock. It looks like wild carrot or “Queen Ann’s Lace”, however it can grow to be 6 to 10 feet tall. Poison Hemlock is toxic to both people and livestock, often leaving serious blisters on those who come in contact with the plant. Ingestion of the any part of the plant can be fatal. END_OF_DOCUMENT_TOKEN_TO_BE_REPLACED

We received many reports of true armyworm infestations in wheat, barley, and corn. These are black or green caterpillars with stripes along the side and orange heads.  In the spring, true armyworm moths migrate from the south and lay eggs in grasses such as forage and weed grasses, winter wheat and barley, and rye cover crops.  When the eggs hatch, the larvae can significantly damage wheat and barley before then moving to young corn. Usually, moth flights occur in April, but we may have had a second peak the first or second week of May—it’s likely the caterpillars feeding now are from this later flight. Right now, wheat, barley, and corn should be inspected for true armyworm populations. Armyworms like to hide during the day and feed at night, so scouting should occur at dusk or dawn, and/or on cloudy days. END_OF_DOCUMENT_TOKEN_TO_BE_REPLACED

As we’ve explained in our previous blog posts here and here, the Ninth Circuit Court of Appeals vacated the registration of the dicamba products on June 3, 2020.  In doing so, the court stated that the EPA had failed to perform a proper analysis of the risks and resulting costs of the products.  According to the court, EPA had substantially understated the amount of acreage damaged by dicamba and the extent of such damage, as well as complaints made to state agriculture departments.  The court determined that EPA had also entirely failed to acknowledge other risks, such as the risk of noncompliance with complex label restrictions, economic risks from anti-competition impacts created by the products, and the social costs to farm communities caused by dicamba versus non-dicamba users.  Rather than allowing the EPA to reconsider the registrations, the court vacated the product registrations altogether. END_OF_DOCUMENT_TOKEN_TO_BE_REPLACED

The majority of insect infestations that occur in stored grains are a result of migration into the bin. These insect populations will be present in piles of spilled grain from the previous year, livestock feed in the area, litter, and weed growth. Newly harvested wheat can also be contaminated when it comes in contact with infested grain that was not cleaned from the combine, trucks, wagons, augers, dump pits, or grain leg buckets. Another source of contamination can be carryover grain in a bin that was not correctly emptied. END_OF_DOCUMENT_TOKEN_TO_BE_REPLACED 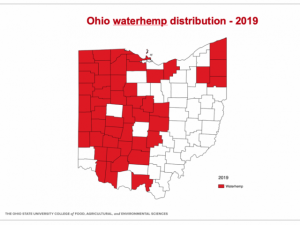 survey of OSU Extension County Educators, along with information we had from samples submitted, direct contacts, etc. We still consider any new introductions of Palmer amaranth to be from an external source (brought in from outside Ohio) – hay or feed, infested equipment, CRP/cover/wildlife seedings.  Palmer is not really spreading around the state, and as the map shows, we have had a number of introductions that were immediately remediated.  The number of counties where an infestation(s) is being managed is still low, and within those counties, the outbreak occurs in only a few fields still.  Waterhemp is much more widespread in Ohio and is spreading rapidly within the state from existing infestations to new areas via equipment, water, animals, etc.  We do not have Ag Educators in all counties, and even where we do, infestations can occur without us knowing about them.  Feel free to contact us with new information to update the maps. END_OF_DOCUMENT_TOKEN_TO_BE_REPLACED