In recent days we have been experiencing 90 degree F days with limited precipitation, and so we are starting to see some leaf rolling in corn. Some of this may be related to reductions in soil moisture, but may be related to restricted root systems as well. Depending on the stage of corn at the time of these conditions, different effects on yield may be expected. Corn ear development occurs throughout the growing season, and extreme temperature or moisture stress at different growth stages will decrease different aspects of grain yield. Below is a quick summary of the yield component most affected by environmental stress at different growth stages: END_OF_DOCUMENT_TOKEN_TO_BE_REPLACED

Our attention now turns to the summer growing season and what is in store. Some things are different this summer.

The latest climate outlooks are available at: https://www.cpc.ncep.noaa.gov/

Every year presents a different set of challenges for agricultural production across Ohio. Last year, northwest and west central Ohio could not escape the rain. This year, Ohio cannot seem to shake the chill. An unusual weather pattern set up across the Midwest and Northeast U.S. late last week and into the weekend that led to some snow in spots and record or near-record lows across the state (Figure 1). Overnight lows for a few locations in Ohio on Saturday May 9, 2020 include 26°F outside of Toledo, 27° in Lancaster and Youngstown, and 28°F in Dayton, Cincinnati, and New Philadelphia. Many areas spent more than eight hours below 32°F with about 4 hours spent below 30°F. Naturally, this would raise questions concerning potential wheat damage. 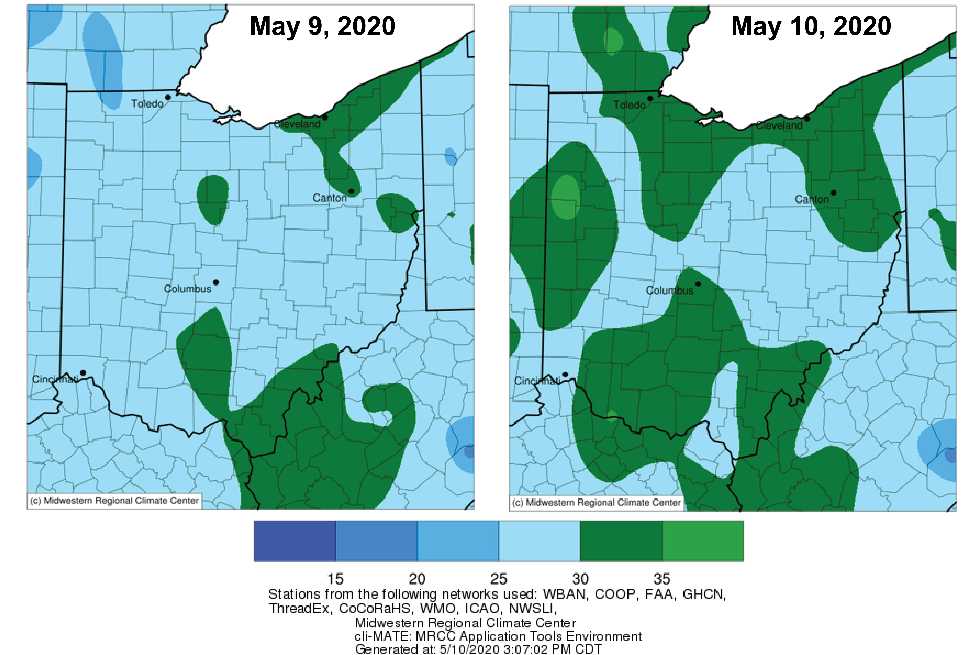 We are once again providing a soil temperature overview in the C.O.R.N. Newsletter through April-May 2020. The College of Food, Agricultural, and Environmental Sciences (CFAES) Agricultural Research Stations located throughout the state have two- and four-inch soil temperatures monitored on an hourly basis. 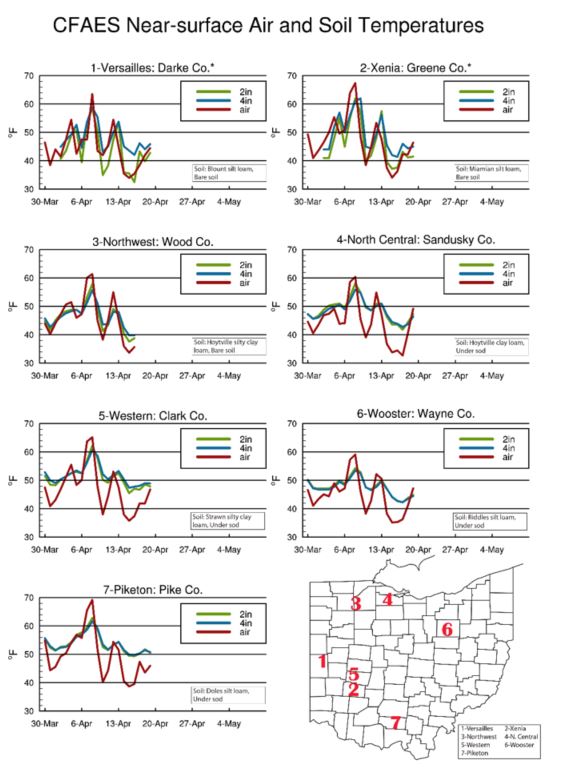 Figure 1: Average daily air temperature (red), two-inch (green) and four-inch (blue) soil temperatures for spring 2020. Soil type and placement are provided for each location. Map of locations provided in the bottom right. Soil temperatures are minimum temperatures for Versailles and Xenia and daily average for other sites. END_OF_DOCUMENT_TOKEN_TO_BE_REPLACED

Temperatures and Rainfall: Temperatures will start the first 7 days of April 1-3 degrees F above normal. Rainfall will start April below normal about half of normal. That is some good news  as the end of March (as forecast) was very wet. However, most indications are for the remainder of April after the first week, temperatures will be near normal and rainfall slightly above normal. This will put pressure on early spring planting in April. Evaporation and evapotransporation will be held in check by closer to normal temperatures as we go through April. The May outlook calls for warmer than normal and a little wetter than normal but not as wet as last year. END_OF_DOCUMENT_TOKEN_TO_BE_REPLACED

What it shows is Ohio is ranked anywhere from the top 5-25% of wettest years on record for soil wetness depending on where you are in Ohio. This is slightly drier than at the same time last year but bottom line it is still wet. The last 30-days of rainfall is generally between 90-140% of normal across Ohio. The extreme northwest corner of Ohio has been running at about 80% of normal. About 75% of the state has been running wetter than normal the last 30 days with about 25% a little drier than normal. You can get all the latest information on precipitation at 4 km resolution at: https://water.weather.gov/precip/ This data is quality controlled by humans at the river forecast centers like OHRFC. END_OF_DOCUMENT_TOKEN_TO_BE_REPLACED

Well it is almost February, which means we are past the halfway point of winter and in the heart of Extension meeting season. Looking ahead to the next week, I have a First Monday Coffee Break planned at the Extension office where we will discuss non-meat alternative proteins and how to have a sound conversation on the topic with consumers. Also, next Friday is NW Ohio Crops Day, which I have wrote about before. The deadline to RSVP for the event at the reduced cost is tomorrow at 4:30 p.m.

Speaking of animals and halfway through winter, Sunday is Groundhog Day. According to folklore, if it is cloudy when a groundhog emerges from its burrow on this day, the groundhog will leave the burrow, signifying that winter will soon end. If on the other hand, if it is sunny, the groundhog will supposedly “see its shadow” and retreat into its burrow, and winter will continue for six more weeks. END_OF_DOCUMENT_TOKEN_TO_BE_REPLACED

Little snow, warmer days — it’s been an unusual winter. Or has it?

On average, Ohio’s annual rainfall has increased 5% to 15% since the early 1900s, with the largest increases in areas such as north-central Ohio where fall rainfall has risen by 31%, Wilson said. END_OF_DOCUMENT_TOKEN_TO_BE_REPLACED

A more active weather pattern is ahead. We expect a weak to moderate storm with some rainfall every 3 to 4 days over the next few weeks.

For the week of Oct. 22, expect slightly above normal temperatures by a degree or two and rainfall between 0.25-0.75 inches on average. There could be some scattered freezing temperatures in the north and west sections of Ohio especially come Saturday morning.

For the last week of October, there should be early to mid week rainfall with another 0.25-1.00 inches followed by a surge of cold weather and the real possibility of the first widespread freeze toward Halloween.

The outlook for November is above normal temperatures after a cold start to the month and rainfall normal to above normal. The early trends suggest a turn to a wetter late winter and spring of 2020 but we will need to simply monitor that.

The next two weeks rainfall totals will generally range from 0.50 to 2 inches across the state.