“Every 25 seconds in the United States, someone is arrested for the simple act of possessing drugs for their personal use… ”  This fact is stated by the ACLU in a collaborative report with Human Rights Watch. With these kinds of statistics, it is no wonder our prisons are filled by people with non-violent drug charges. These non-violent offenses can have a major impact on the lives of the people who committed them. Crimes, ranging from misdemeanor to class A felony, can make these already vulnerable people even more vulnerable to human trafficking. In this post, I will give a brief history of the War on Drugs, examine the statistics revolving around the War on Drugs and the realities that these drug offenders face while in and after being released from prison.

The War on Drugs

According to the Drug Policy Alliance, it all started in the 1870s with anti-opium laws specifically targeting Chinese immigrants. Then, in the 1910s and 20s in the Midwest, the first anti-marijuana laws were passed to target Mexican migrants and Mexican Americans. In the 1960s, drugs became a sign of rebellion and associated with the “Live Free” hippies and rockers of the era. These young adults were a force of political unrest and social upheaval. In 1971, President Nixon declared a “war on drugs” and significantly increased the size of the federal drug agencies and introduced mandatory sentences for drug offenders, along with no-knock warrants.

A top Nixon aide, John Ehrlichman, later admitted: “You want to know what this was really all about. The Nixon campaign in 1968, and the Nixon White House after that, had two enemies: the antiwar left and black people. You understand what I’m saying. We knew we couldn’t make it illegal to be either against the war or black, but by getting the public to associate the hippies with marijuana and blacks with heroin, and then criminalizing both heavily, we could disrupt those communities. We could arrest their leaders, raid their homes, break up their meetings, and vilify them night after night on the evening news. Did we know we were lying about the drugs? Of course we did.”

In the 80s and 90s, drugs again came to the forefront of politics with the AIDS epidemic. Nancy Reagan’s “Just Say No” campaign and the DARE program were established and caught on like wildfire. Increasingly harsher penalties and laws were laid out for possession or selling drugs. With these new penalties came greater restrictions on needle access programs. While in his campaign, Bill Clinton advocated for the decriminalization of marijuana, however, his rhetoric toward it and other drugs remained the same as his Republican predecessors throughout his presidency.

In the current era, we have seen the police become more and more militarized. By the end of George W. Bush’s presidency, there were around 40,000 military-style SWAT raids, mostly for non-violent drug offenses. However, while federal drug reform was stalled in the Bush era, state-level reforms were at work, slowly chipping away at the war on drugs. Public opinion, especially toward marijuana, has drastically shifted in the new millennia. 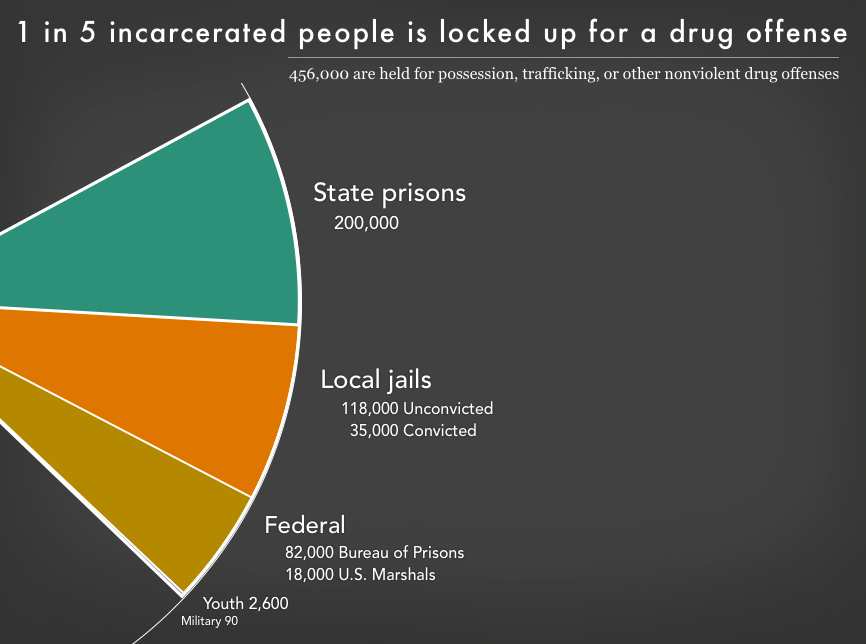 If these statistics weren’t enough, the huge racial disparity in policing these crimes is alarming. While over the course of their lives, a white person is more likely to try illicit substances than a Black person. Recent research shows that Black and white people use illicit drugs and marijuana at the same rates, but for some reason, around the country, Black people are four times more likely to get arrested for possession of marijuana and two and a half times more likely to be arrested for possession of other illegal substances. Nationwide, Black people make up around 62 percent of the prison population. 40 percent of black people who are sent to prison are convicted of drug charges compared to 25 percent of white people.

When it came to sentencing, in the states analyzed by Human Rights Watch and the ACLU, there was an alarming trend. Many people are being sentenced to the maximum sentences for minute amounts of drugs. Texas and Louisiana were the worst offenders with prosecutors not only pursuing a case but pushing for the maximum sentences in any case, even if it was the first offense. In Texas in 2015, 16,000 people were sentenced to jail time for possession of drugs at the state felony level, which meant these people had less than one gram of a substance in their possession. To put it into perspective, one gram weighs a little less than a quarter of one of the sugar packets you get in restaurants.

The majority of the 30 defendants we interviewed in Texas had substantially less than a gram of illicit drugs in their possession when they were arrested: not 0.9 or 0.8 grams, but sometimes 0.2, 0.02, or a result from the lab reading “trace,” meaning that the amount was too small even to be measured. One defense attorney in Dallas told us a client was charged with drug possession in December 2015 for 0.0052 grams of cocaine. The margin of error for the lab that tested it is 0.0038 grams, meaning it could have weighed as little as 0.0014 grams, or 35 hundred-thousandths (0.00035) of a sugar packet.

Beyond this, it seems apparent from the report that the courts are coercing guilty pleas out of people who could be proven innocent in trial by issuing outrageous bails or threatening with longer sentences if they go through with trial and lose. For lower-income defendants, this high bail means that they have to fight their case from behind bars or, often times for first offenders, make a plea and walk out on probation.

Behind Bars and Beyond

What does any of this have to do with human trafficking? Quite a lot, actually. According to the Polaris Project, “Victims of human trafficking are frequently lured by false promises of a lucrative job, stability, education, or a loving relationship. Victims can be men or women, adults or children, foreign nationals or U.S. citizens. While they share the trait of vulnerability, victims have diverse ethnic and socio-economic backgrounds, varied levels of education, and may be documented or undocumented.” For people in prison, especially young women, stability or a job once they get out is a tantalizing idea. In Columbus, we are lucky with the CATCH court, but in many other cities, when someone is brought in on a drug or solicitation charge, they don’t look at the big picture. John Meekins says on End Slavery Now,

… I subsequently discovered more and more inmates who were serving time for a variety of offenses but who were actually victims of human traffickers. I was not the only one who did not recognize human trafficking for what it was. In fact, too many in law enforcement don’t either. They look at a prostitute as a single person, and seldom link her to gangs and other large organized criminal organizations for which many of them are forced to work, not as employees, but as slaves.

The punitive system is hurting these people. They’re victims, but not viewed as such, they’re just another druggie or prostitute. But this only accounts for the people who were being trafficked before they went to jail. Once in jail, often times, traffickers have people working for them from the inside. These people are other inmates who offer places to stay with “friends” once the victim gets out. The people, mostly women, are unwittingly being recruited into trafficking as research suggests that young women (around the age of 21) who are getting out of prison after two or three years are an ideal demographic for traffickers. These traffickers will pick women up right as they get out of prison. The women think they are just going to stay with someone for a few days, until they get a job, but are often tricked into becoming dependent on illicit substances and subsequently pimped.

Beyond this, it is incredibly hard for someone with a drug conviction to get a job, especially if it is a felony (and in many states they are). If they can’t legally obtain a job, they’ll turn to the informal economy to make ends meet. That could mean selling drugs on the street, working for a gang, or doing sex work. The outrageous sentencing and trumped up charges that drug offenders face can become a huge obstacle that they will have to live with for the rest of their lives.

I don’t have the all the answers. It’s obvious that the war on drugs has enflamed the environments in which people are trafficked since often people are tethered to their abuser via their drug addiction. Often times, people are afraid to ask for help if they are being trafficked when they are dependent on substances because the criminal justice system isn’t kind to those who use drugs. I think it is also obvious that the punitive way we deal with most crime should be rethought by our justice system.

In the past five years, there has been a shift of public opinion on marijuana. Even with our current administration who threatens to take us back to the Reagan Era as far as drug policy is concerned, states are moving toward decriminalization or legalization, which is a good start, in my opinion, but it needs to go farther. I think a huge factor in trafficking is the fact that people get hooked on illicit substances and then are forced to remain in horrible situations to get their fix. I think decriminalization of these substances could break the informal economies revolving around them and make it easier for people to leave or, in a harm reduction sense, make it less punitive for the people involved.

I think another great step to take would be mandatory human trafficking training for all police officers, lawyers, and judges. Maybe with this type of training, they will be more likely to recognize the signs of someone who is being trafficked, not just another drug addict or prostitute. As John Meekins suggests, law enforcement should be partnering with NGOs in the community to help inmates transition back into everyday life and get rewarding jobs in order to further break the cycle. Finally, as Meekins also suggests, since inmates can only make phone calls to a restricted amount of pre-approved numbers, make one of those numbers the National Human Trafficking Resource Center.

These are just some of the ways that the justice system could help victims of trafficking. If they do implement these suggestions, which aren’t just my own, perhaps in five years time we would see a drop in drug-related arrests and subsequently fewer people being trafficked.

3 thoughts on “Has the War on Drugs Enflamed the Environments of Human Trafficking?”