‘High on the craggy cliffs of Oman’s rocky desert landscape, Sarah Ivory squeezed into narrow, dark caves in search of a different kind of goldmine. Shaded away from the desert sun, Ivory tapped a dusty, gray rock with her hammer and heard the dull, hollow sound she’d been waiting for. She found a special kind of fossil that, when cut open, would reveal smooth golden-brown layers that can help scientists see deep into the past.

This was a fossil of a midden, a communal toilet used by generation after generation of a small, desert-dwelling animal. The same middens are sometimes used for tens of thousands of years. Ivory recently journeyed to Oman, on the tip of the Arabian Peninsula, to find middens tucked in these caves, dig them out and ship them back to her laboratory at Penn State for analyses. It’s a dirty job. But in one of the driest places in the world, middens may be the best evidence to understand how the climate changed in the past, and how plants, animals and even humans, responded.’

excerpt from; Digging Into the Past – Using hyrax middens to study the past is helping to understand future climate, IMPACT The results show that browsing by large‐bodied livestock, such as camels and cattle, can substantially alter the species composition, structure, and phytomorphology of woody vegetation in semi‐arid woodlands and forests. Juveniles are particularly susceptible to browsing which alters woody vegetation demography and inhibits regeneration potential. The results support previous suggestions of overstocking in Dhofar and highlight the importance of swift measures to reduce livestock browsing pressure in the Anogeissus cloud forests.

Annalee Sekulic keeps on winning! As the Spring Semester and her Senior Year at OSU draws to a close, Annalee participated in the now highly selective Denman Forum, where she won a Third Place. She successfully defended her undergraduate thesis “Identifying Human and Climatic Influences on Ancient Plant Communities in Dhofar, Oman,” which can be found in the OSU Libraries Knowledge Bank . Annalee also has been selected as the recipient of  OSU Department of Anthropology 2 020 “Best Undergraduate” award. Her nomination noted that “she is a student whose achievements showcase the potential of anthropology to transform individuals and society…[one] who has overcome significant challenges, embraced the opportunities afforded her, excelled academically, dedicated herself to service, and achieved every mark of distinction.” Here is Annalee in her “zoom” defense with her thesis committee. Hi everyone! My name is Katie Horisk, and I recently joined the ASOM team! I am a PhD student working with Dr. Sarah Ivory at Penn State. I am currently conducting pollen analysis on the rock hyrax (Procavia capensis) middens, in order to reconstruct past vegetation communities and changes in their composition through the mid-Holocene to present.

I had the opportunity to join the most recent field season in Oman, which was my first trip to the country.  It was an incredible experience. In Muscat, Sarah and I paid a visit to the Oman Botanic Garden, where I got to meet some of the plants responsible for the pollen I see under the microscope. We also met with the Ministry of Heritage and Culture in both Muscat and Salalah, where we updated our collaborators on the goals for that trip. After three weeks in the field in Dhofar, we managed to collect 63 more middens! This was a well-earned reward for long days surveying the hot desert wadis. The landscape looks barren from a distance, but there are so many small plants and flowers that thrive on the weathered slopes. There had been a long rainy season, which meant we got to enjoy a more verdant February than usual. Immersing myself in the unique environment of Dhofar helped to contextualize my work enormously.

In addition to toiling under the desert sun, we took long lunch breaks in shady caves. Who knew eating canned hummus could become one of the best parts of the day? Our ministry representative, Aly Al-Mehri, would make tea over an open fire, then use the coals to burn Frankincense! On the weekends we took trips to beautiful beaches, explored the Souq, and got to see archaeological sites excavated by the team as well as the site of Sumhuram (the ancient port city and center of the Frankincense trade).  I enjoyed getting to know our Omani colleagues and learning from them in the field. One day we worked with Ali Alkathiry, and I brought him a large Gastropod fossil I had found. He explained how his ancestors would seek out these stones when they had a stomachache, boil them in water, and then drink the water. Sarah and I shared that the fossils were calcium carbonate, a mineral used in medicines like Tums! He got a kick out of that. This small anecdote demonstrates the extensive knowledge the people of Dhofar have about the landscape. I feel grateful to have gotten to learn even a little about the ways in which they interact with their environment, and I hope to carry what I learned about the people and the place throughout my research. Inshallah we will meet again soon! Excited to share this new research in the fantastic Remote Sensing in Ecology and Conservation journal.

The cloud forests in Dhofar may be the driest on earth. They receive just 200 mm of rain each year, but during the monsoon/khareef, as much moisture is intercepted from the fog by the forest canopy! This is critical to ecosystem functions and services. Therefore, we hypothesized that vegetation patterns might correlate with fog distributions, which themselves might be affected by the complex mountain topography.

To investigate this, we first needed to map fog distributions at a high resolution (to see the effects of the complex topography). We found that many Landsat scenes showed the fog events, with little interference from other cloud types. So, using Google Earth Engine we extracted fog cover from 257 scenes, and calculated mean (average fog distributions) and SD (fog variability). We used recursive partitioning to analyse how topographic variables influence fog distributions and how fog distributions influence vegetation patterns (NDVI).

The Dhofar mountains are home to endemic and threatened biodiversity, and a wealth of archaeological and geological heritage. We hope that our layer of fog density, which is hosted in the PANGAEA data repository (https://doi.org/10.1594/PANGAEA.902295…), will enable an improved understanding of how species and in Dhofar respond to local variability in topoclimatic conditions. Annalee Sekulić started volunteering for the Ancient Socioecological Systems in Oman project as a sophomore, and soon after she found herself traveling to the Arabian Peninsula to do research fieldwork with a global team of experts. Her task? Collecting hyrax midden as an unexpected way of tracking ancient pastoralist communities.

Daniel Peart presented preliminary results from our model of social-spatial patterns in pastoralism at the annual meetings of the American Anthropological Association in Vancouver, Canada. 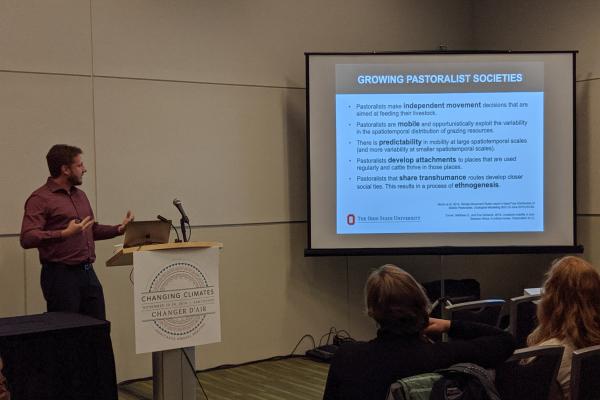 Work is underway to design an Agent-based model of contemporary pastoralism in Dhofar, which will then form the basis of the ancient model to test theories on pastoralist mobility, habitation and monument building in ancient Dhofar. In these photos, the team is busy creating conceptual diagrams of attributes and properties of the different agents in the model, and how they relate to one another. Lawrence Ball generated geospatial data sets that generate layers of fog, elevation and other attributes of the Dhofar mountains. Daniel Peart is building these into a realistic agent-based model for the Dhofar human-ecosystem. The first display of elevation data in Netlogo is impressive! Joy McCorriston and co-author Julie Field published a new introductory textbook with a new narrative of the evolutionary context of our human historical ecology. The narrative introduces diversity in prehistory, establishes technology as the interface of humans and environments, showcases peopling the world, digging in, extinctions in the past, human behavioral ecology, producing food, humans as agents, feeding cities, building monuments-building society, conspicuous consumption, writing, extractivism, and choice in the Anthropocene future. Survey and excavations that led up to the ASOM Project are in the book.