Crop samples submitted to the OARDC Weed Lab (http://owl.osu.edu) with suspected herbicide drift injury symptoms sky-rocketed in 2017 and early indications are for the same trend in 2018.  This is happening mainly because vegetables and fruits are much more sensitive to the 2,4-D and dicamba herbicides grain farmers are now using to kill weeds that are no longer sensitive to glyphosate alone.  There is always some drift; but when crops have an elevated sensitivity to the compounds moving in the environment, everyone sees the effect.

Already in 2018, most grain fields have received burndown sprays containing 2,4-D (and some with dicamba) mixed with glyphosate. Predictably samples from injured fruit and vegetable fields, and orchards are being submitted for diagnosis.  So far, roughly 50% of the samples received are not showing symptoms characteristic of herbicide drift, and that’s significant because our lab rarely receives the samples until they have cleared a pathology screen.  So, while crop injury from drift is up significantly, there are still relatively few instances of damage where drift is clearly the culprit.

A general deterioration in farm community relationships has already occurred in some states, as a result of recent conflicts arising over drift.  Grain, vegetables, fruits, landscapes and natural ecosystems have been damaged sometimes with tragic consequences, following the expanded use of 2,4-D and dicamba. Human nature being as it is, we all tend to look outside to explain our problems before we look inward.  Considering this, it is important to consider other possible causes of crop injury before assuming occurrence of drift from the neighbors’ fields.

So, ‘what’s a farmer to do?’, to reduce the likelihood of being hurt by drift from nearby fields?

Thinking about the above points it should be obvious that maintaining high quality and complete field records, year in and year out, is important when drift occurs.  Being able to 1) substantiate your own crop and pest management practices validates that you were not the cause of the problem, and 2) past yield records from the field affected will help support a claim for lost yield.

Remember to communicate with your neighbors each year.  Keep in mind that many grain farmers have no idea how valuable an acre of produce can be.

Finally sign up with the Ohio Specialty Crop Register.  Past experience indicates this may be the single most important step you can take to protect yourself.

Cover crops have been used for decades on diversified vegetable farms.  Over the past 5-10 years there has been a resurgence in the use of cover crops as nutrient management, nutrient scavenging, and water quality have come under increasing scrutiny and focus.

Several researchers at OSU have conducted work on the use of cover crops in both field crop and specialty crop systems.  In 2005 and 2006, Andy Wyenandt (graduate student) and Dr. Mac Riedel (emeritus Dept. of Plant Pathology), worked on several cover crop combinations to determine which mixtures seemed to be the best fit for most pumpkin operations in Ohio. Based on the goals at the time to select a cover crop or mixture that persisted through the growing season and generated enough biomass to suppress weeds and soil borne diseases such as Fusarium, determined that fall seeded winter rye was one of the best options.

One unexpected outcome of this research overwhelmingly embraced by growers who adopted this management practice was how clean the fruit were at harvest, requiring little or no additional washing, especially during rainy autumn weather.  Later research focused on modifying a solid stand of winter rye using modified tillage to create more suitable planting or transplanting zones.  Now that soil building and ecology has becoming increasingly more important to growers, cover crop mixes are being used that go beyond just covering the soil, and seek to increase beneficial microbial activity in the soil.

On September 21, 2017, five cover crop mixtures were broadcast seeded and then worked into the soil using a cultimulcher at the Western Ag Research Station in South Charleston with the purpose of being used in a pumpkin seeding or transplanting demonstration in 2018. The cover crop mixes range from simple to diverse, with some of the same earlier goals to cover the soil, reduce weeds and diseases, keep the fruit clean, and enhance soil building and microbial activity.

The cover crop mixes were purchased through Walnut Creek Seeds. The species, ratios, seeding rate, and cost are as follows:

Three-foot swaths of each 30’ plot were sprayed out with glyphosate on 15’ row spacing that will be rototilled for transplanting pumpkins in late May or early June. Images shown below are of initial seeding and growth in the fall, followed by growth in the spring as of May 7th. Though some cover crop mixes listed up to eight plant species, most of them winter killed, leaving only winter rye, crimson clover, and hairy vetch seen growing in any of the plots.

There will be additional reports on this demonstration project as the season progresses, and it will be a stop during the pumpkin field day on August 23rd.

It’s that time of the year again when berry, grape, and peach growers throughout Ohio have to start thinking about Spotted wing Drosophila (SWD) on their farm.  Getting growers and Extension educators familiar with this pest, how to monitor, identify, manage, etc., has been a significant focus of faculty in the Dept. of Entomology and the Integrated Pest Management (IPM) Program.  So, in addition to hanging baited traps in your fields, take a few minutes to increase your SWD IQ by perusing the information and videos below.

To date, there have been six hands-on workshops held around the state over the past six years, two webinars and dozens of meetings where updates on current research have been given for the benefit of both growers and Extension educators.

In an effort to establish a greater online presence about various aspects of SWD management, a series of videos have been created and placed on the OSU IPM YouTube channel (https://go.osu.edu/osuipm) which can be accessed at anytime. The focus of each of these videos is briefly described below, and placed in order from deploying the trap in the field (first step) to conducting a salt water test (last step).

The SWD workshops, webinars, and video series have mainly been supported by USDA NIFA grants 20147000622507 and 20177000627174, while OSU’s overall SWD program have been funded by several sources including USDA NIFA and the Ohio Vegetable and Small Fruit Research and Development Program. 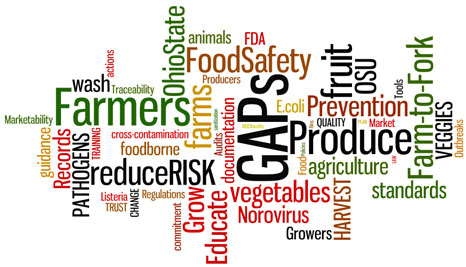 What is a GAPs Class?

•An educational course that covers good agricultural practices or ‘GAPs’, which help reduce the risk of on-farm produce contamination
•Attending the OSU GAPs class does not equate to being ‘GAPs Certified’