Methyl bromide, also known as bromomethane, is an organobromine compound that exists as a colorless, and odorless gas. It was often used as a pesticide for soil fumigation, as well as structural fumigation and post-harvest commodity treatment. Eventually, it was found to be a major contributor to ozone depletion and was eventually phased out of use, being completely phased out of the United States in 2005, and in other countries in 2015 (1). 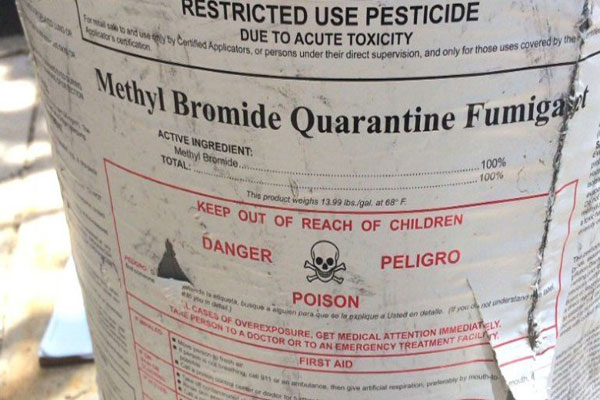 Methyl bromide can be made synthetically using bromine and methanol, as shown in the reaction below (2). Many plants such as rapeseed, mustard, cabbage, Chinese cabbage, broccoli, and radish, produce methyl bromide naturally (3).

The most common route of administration for methyl bromide is inhalation, however, slight dermal and oral absorption has been seen.

–Absorption: Methyl bromide is rapidly absorbed in the respiratory tract in animals and about 52-55% of the inhaled dose was absorbed.

–Distribution: Methyl bromide is widely distributed within the body, the following figure shows the relative concentration of methyl bromide in various tissues

Image made by Daniel Korot

–Metabolism: Methyl bromide is metabolized by water displacing the bromine to form the metabolites methanol and bromide ion.

–Excretion: No human studies were done on the excretion of methyl bromide, but in other animal models it is either exhaled or some non-volatile metabolites are excreted in the urine.

The mechanism of action for methyl bromide is not known, however, it is believed it has to do with the methylation of certain macromolecules such as DNA, lipids, and certain enzymes, as well as neurotransmitters in the brain.

The complete toxicological profile from the Agency for Toxic Substances and Disease Registry of methyl bromide can be found here.

Here is an article that looked at the relationship between occupational exposure to methyl bromide and the effects on the central and peripheral nervous system for those working in the fumigation industry.

Although no studies have been conducted in humans, exposure to methyl bromide was found to decrease sperm density in mice.

Methyl bromide has been classified as Group 3 carcinogen, or as “not classifiable”.

Humans with a congenital deficiency in glutathione transferase are more susceptible to more severe effects from exposure.

Treatment for methyl bromide involves rinsing any skin that had been exposed to methyl bromide with water and mild soap, as well as irrigating the eyes with either water or saline solution. Activated charcoal should also be administered if the person is alert and able to swallow. In more severe cases endotracheal intubation may be necessary in order to open the airways and a bronchodilator may be given to make respiration easier for the person.