This emerging field focuses on the comparative study of the many relationships between science, technology, and culture. The concentration offers courses covering a wide range of concerns and perspectives. These include an introduction to the history and philosophy of science, the role of technology in contemporary society, cultural dimensions of medicine, relations between gender and science, historical and contemporary studies of visuality, and the intertwining of science and technology with western and other cultures in local and global contexts.
In Science Studies students consider not only the ways in which science and technology shape culture, but how culture shapes the direction and growth of science and technology and how science is interwoven with other aspects of culture. The contributions of science to our understanding and misunderstanding of difference—racial, ethnic, gender, sexual—is also of central concern, along with social and political problems related to economic globalization, environmental deterioration, and global networks of communication, transportation, and migration. Marta de Menezes is a Portuguese artist with a degree in Fine Arts by the University in Lisbon, a MS in History of Art and Visual Culture by the University of Oxford, and a PhD candidate at the University of Leiden. She has been exploring the intersection between Art and Biology, working in research laboratories demonstrating that new biological technologies can be used as an art medium. In 1999 de Menezes created her first biological artwork (Nature?) by modifying the wing patterns of live butterflies. Since then, she has used diverse biological techniques including functional MRI of the brain to create portraits where the mind can be visualised (Functional Portraits, 2002); fluorescent DNA probes to create micro-sculptures in human cell nuclei (nucleArt, 2002); sculptures made of proteins (Proteic Portrait, 2002-2007), DNA (Innercloud, 2003; The Family, 2004) or incorporating live neurons (Tree of Knowledge, 2005) or bacteria (Decon, 2007). Her work has been presented internationally in exhibitions, articles and lectures. She is currently the artistic director of Ectopia, an experimental art laboratory within a biological research institute – the Instituto Gulbenkian de Ciência – in Lisbon, and Director of Cultivamos Cultura in the South of Portugal. Website: martademenezes.com 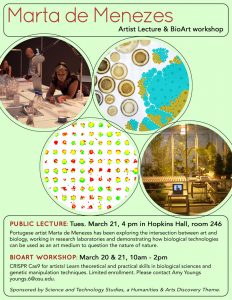 The Cultures of Science group is hosting Harris Solomon. At 10 am, there will be a book talk where he will address participants’ questions about his recently published book, Metabolic Living: Food, Fat, and the Absorption of Illness in India (Duke UP 2016) and a public lecture on his new research about urban traffic as a somatic problem in the city of Mumbai.

Vehicle of Death: Traffic, Trauma, and Movement in India

This paper stems from an ongoing ethnographic research project about traffic accidents in Mumbai, India. It is based primarily in the emergency room and trauma ward of one of Mumbai’s busiest public, municipal hospitals. In the context of traffic accidents, traffic in the ward is in many senses contiguous with traffic in the world outside the hospital. The bleed between the two domains is one of my primary interests. India’s roads are quickly becoming the world’s deadliest, in no small part because urban space is constantly under construction and repair. This phenomenon plays out in bodies. While traffic is often understood as primarily a problem of urban planning and policy, I argue that traffic is also a somatic problem, and that medicine is a primary site of traffic’s resolution. The paper elaborates this claim through the ways that patients, their families, ward staff, and physicians reckon with the thorny merger of city and body.