Lisbon, Portugal –  On October 12, 2018, Joana Wrabetz, GLO.ACT’s Policy Advisor participated in an International Seminar titled  “Migration and Labour Exploitation of the Nepalese in agriculture in Portugal” at the invitation of UNIAUDAX – Entrepreneurship Center of the University Institute of Lisbon (ISCTE-IUL). The seminar was part of a project titled ” Immigration and Labor Exploitation, Nepalese in agriculture in Portugal“, funded by the Fund Asylum, Migration and Integration (FAMI), of the European Commission. 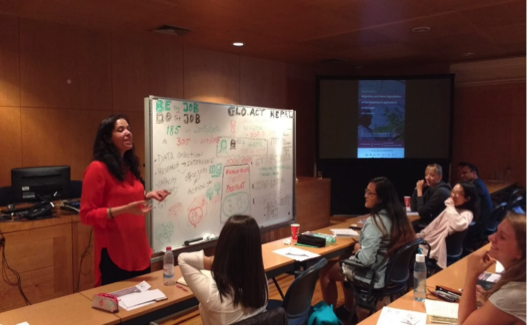 This project has two main objectives: first, to develop and conduct field research to collect primary data; second, to contribute to prevent and fight against labour exploitation of Nepalese citizens in Portuguese farms.

The research conducts in-depth analyzes of Nepalese workers profiles related to their migratory experiences from Nepal to Portuguese redberry farms, and addresses the workers’ motivations and expectations, decision-making processes and typical strategies used in their families, co-ethnic and co-national networks and the related phenomena of forced labor in Portugal.
Read the complete UN article