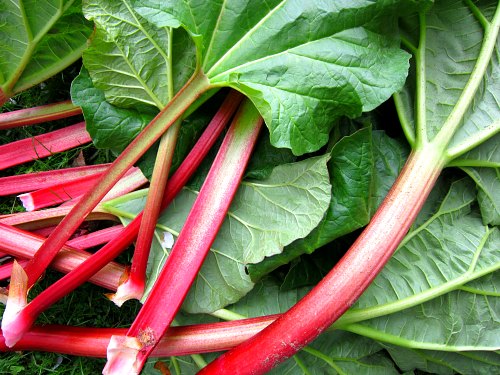 Here is a brief video on rhubarb and its uses:

During World War I rhubarb leaves were recommended as a substitute for other veggies that the war made unavailable. Apparently there were cases of acute poisoning and even some deaths. Some animals, including goats and swine, have also been poisoned by ingesting the leaves.

Toxic effects originate from the leaves of rhubarb plants rather than the edible stalk part. The plant contains oxalic acid, known to be toxic, and Anthraquinone glycosides which are suspected to be toxic. Oxalic acid can also be found in spinach, brussel sprouts, cauliflower, and broccoli but in lower concentrations.

Information above derived from here.

Oxalic acid is found in rhubarb leaves with a high content of around 0.5 grams per 100 grams of leaves. This is present in the form of oxalic acid, and also in the form of calcium and potassium oxalate salts, and is at a level much higher than that found in other portions of the plant such as the stem. The suggested lethal dose of oxalic acid is in the region of 15-30 grams, meaning you’d have to eat a fair few kilograms of the leaves to reach this dose, but lower doses can still cause nausea and vomiting.

Anthraquinones are contributors to the colour of rhubarb, although not major contributors – that part is played by compounds called anthocyanins, common causes of colour in plants. The major anthocyanin in rhubarb is cyanidin-3-glucoside. A range of anthraquinones are also present, including emodin (orange), chrysophanol (yellow), physcion (red-orange), and rhein (red). Besides their colour contribution, these compounds and their derivatives also give rhubarb a laxative effect.

The compounds of interest as far as these effects go are the sennosides, derivatives of anthraquinones. During digestion, these compounds are hydrolysed into a number of smaller molecules, including rheinanthrone. It’s rheinanthrone that is thought to be the primary compound behind rhubarb’s laxative effect. Sennosides are also found in the senna plant (hence the name), and are commonly used in laxative medications. They’re included in the World Health Organisation’s list of the essential medicines.

No current research supporting the carcinogenicity of oxalic acid or anthroquinones.

No specific acute or chronic exposure distinctions have been made.