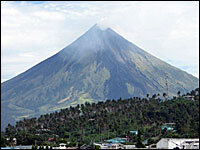 The Mayon volcano in the Philippines. Picture courtesy of npr.org

Religion and Nature Collide is an article from NPR about God and natural phenomenons in the Philippines. The article talks about a typhoon that happened in November of 2006 and goes on to discuss acts of God and stewardship of the earth. Father Jovic Lobrigo, a younger clergy member in an area affected by the typhoon, discussed religion and the environment and told his parishioners,  “Yes, you are a primary creation, and you have superiority of all beings. But with it is responsibility of taking care of creation itself.” To read the entire article click here.