Pesticides help us rid our homes and gardens of biological irritants such as rodents, insects, or weeds. Because the goal of this process is to deter a biological agent, most pesticides attack common cellular pathways and produce adverse effects in humans. Chlorpyrifos are a type of pesticide that belong to the organophosphate family of pesticides. Because of their chemical structure, they follow the characteristics of organophosphates (OP). Let’s briefly review:

Why are we seeing such adverse effects for this family of pesticides?

Hawaii Becomes the First U.S. State to Ban the Use of Pesticide, Chlorpyrifos

Chlorpyrifos can be found in a liquid, granule, and powder form. They can be spread into the ground or sprayed. The biggest agricultural market for chlorpyrifos is in corn, but it is also used for soybeans, Brussels sprouts, fruit trees, nuts, and other agricultural produce (National Pesticide Information Center). The pesticide can also be used as an insecticide to kill roaches and mosquitos.

Originally approved by the EPA for use in 1965, chlorpyrifos usage has been reviewed and adapted to consider health concerns. In 2000, in-home chlorpyrifo use was banned. Certain produce was also limited as it was transmitting the poison to human consumption (EPA- Chlorpyrifos).

The safety of chlorpyrifos was continually assessed from 2002 to the present. In May, private organizations and districts petitioned for the ban of all chlorpyrifos from the market. This is an ongoing fight. The EPA has not banned all forms of the pesticide, claiming the scientific results of health assessments is not enough to confirm the long-term neurotoxicity (EPA- Chlorpyrifos). It will be interesting to see the longevity of this pesticide in the coming years.

Because of the high toxicity, chlorpyrifos are excellent pesticides. However, their deleterious effects are not contained to unwanted pests. As stated previously, chlorpyrifos act as a neurotoxin, affecting the acetylcholine pathway by inhibiting acetylcholinesterase. The inhibition of this enzyme prevents the breakdown of acetylcholine in the synapse, exciting the nerve. The video below provides a short explanation of this biological pathway.

Chlorpyrifos can be absorbed through the skin, ingested, or inhaled. The chemical becomes toxic as the body goes through digestion, tearing it down to a compound called chlorpyrifos oxon. The digested compound binds to acetylcholinesterase irreversibly, rendering the enzyme useless. Acetylcholine will build up in the synapse and activate the muscarinic and nicotinic receptors.

Symptoms of chlorpyrifos poisoning include the following: 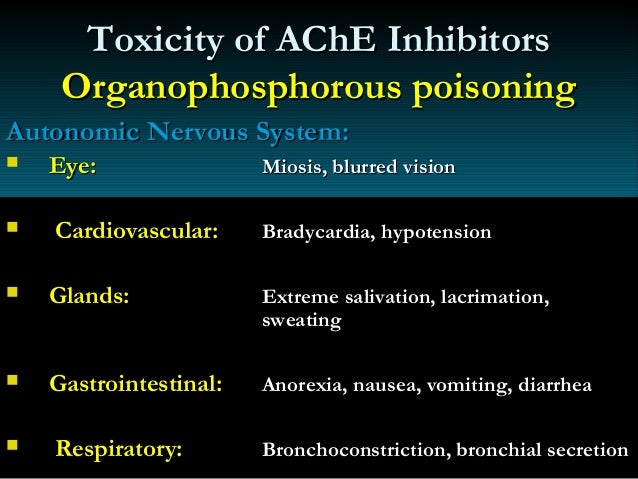 Image was created by Dr. Rahul Kunkulol- Professor of Pharmacology. Retrieved from: https://www.slideshare.net/rahul44201/acetylcholinesterase-inhibitors-dr-rahul-kunkulol

Chlorpyrifos poisoning is treated with atropine and -oxime drugs. Atropine prevents acetylcholine from binding to muscarinic receptors, alleviating excitation of some excess nerve signals. It is not able to block nicotinic receptors. -Oxime drugs are given in co-administration to induce the generation of more acetylcholinesterase enzymes (EPA-chlorpyrifos).

Chlorpyrifos have been evaluated as non-carcinogenic, but studies are still being conducted to test lung and prostate concerns. Chlorpyrifos have shown double the exposure in children compared to adults. This exposure has effects on neurodevelopment, the endocrine system, and reduced birth size (PAM- chlorpyrifos).

Chlorpyrifos are an effective pesticide for the removal of rodents, weeds, and insects; but have harmful effects against humans, particularly the neural development of children. Complete food and carcinogen effects are still unknown. Treatments for chemical poisoning are available. With the known harmful effects of this pesticide, should it continue to be used to treat food? If you are interested in hearing the opposition argument for banning all chlorpyrifos, watch the video from Earth Justice.