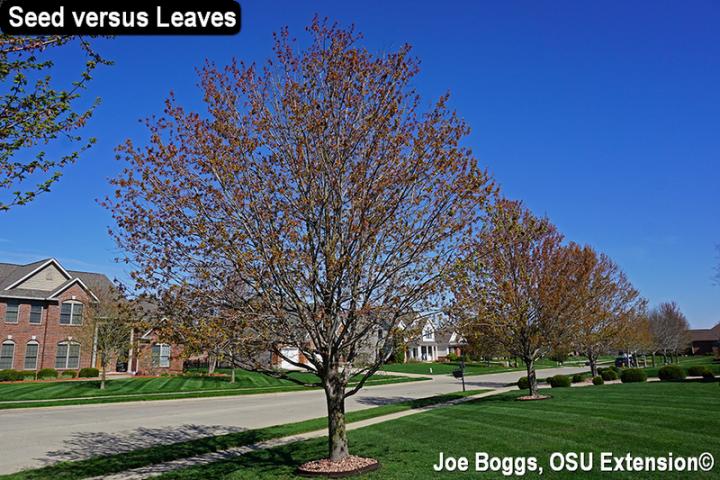 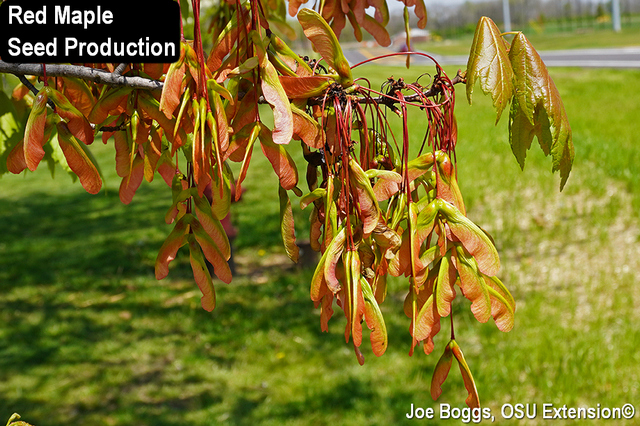 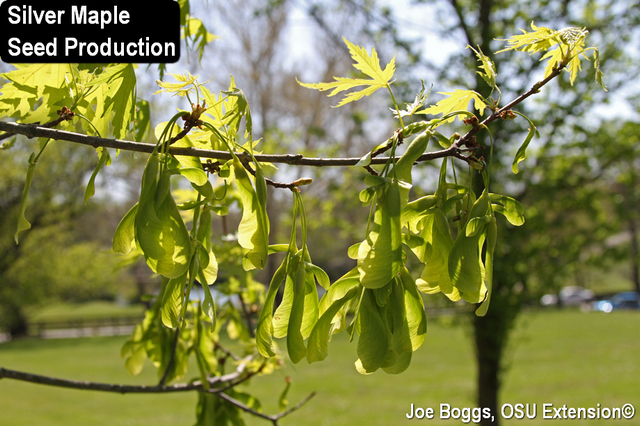 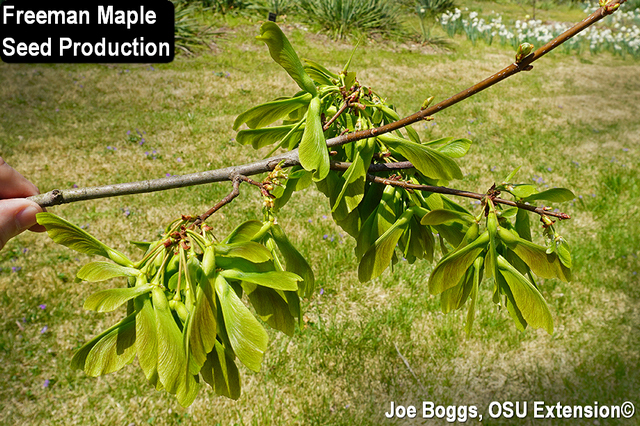 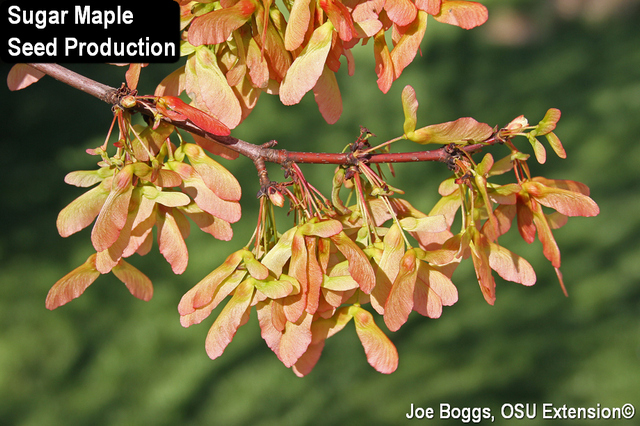 Obviously, heavy maple seed production is a natural event securing the survival of the species as demonstrated by hordes of maple seedlings eventually appearing in landscapes, vegetable gardens, and gutters.  However, this blatant demonstration of plant gene continuity can produce canopy conditions that make maples “look sick” causing homeowners to question the overall health of their maple trees. 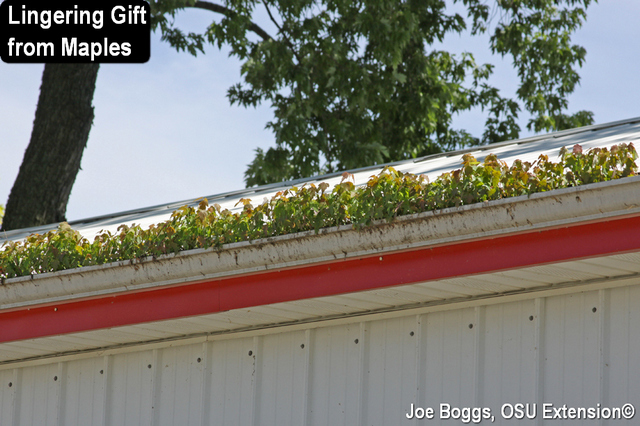 The first challenge is the prolonged presence of stunted leaves.  Trees shift energy to support heavy seed production at the expense of leaf expansion. Abundant springtime samaras by themselves can draw attention to maple trees, particularly when the seeds mature and turn brown.  The trees will look bare when the massive numbers of seeds drop from the trees because the stunted leaves need time to fully expand to fill out the canopy.  So, homeowners need to be patient. 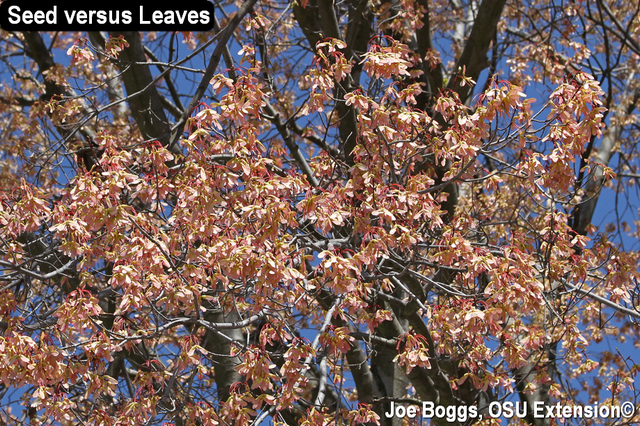 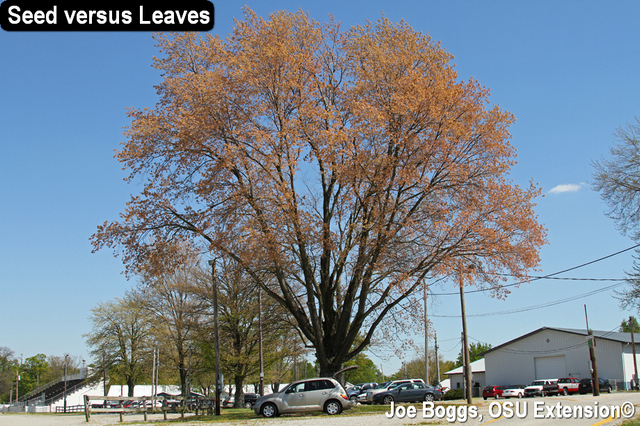 It was once believed that prolific tree seed/fruit production is connected to tree stress.  The theory was that heavy seed production occurred on stressed or dying trees as a last hurrah in support of the species.  However, research has failed to provide consistent support for this speculative conjecture.  For example, a study published in 2017 in the Canadian Journal of Forest Research found no evidence that stress associated with drought over previous seasons influenced seed production in sugar maples.

Another hypothesis emerged several years ago linking heavy seed production to the lack of spring freeze events.  The thinking was that maples are by nature heavy seed producers but their effusive reproductive efforts are occasionally thwarted by freezing temperatures killing the flowers or nascent seed.  This explanation carries some weight given that observations across Ohio in past years support a reduction in seed loads after spring freezes damaged vulnerable flowers or seeds. 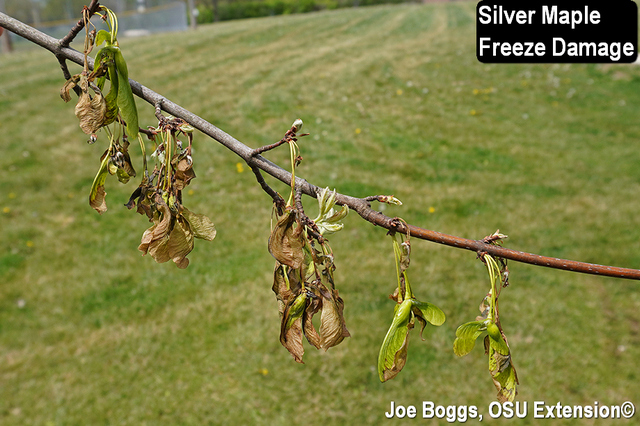 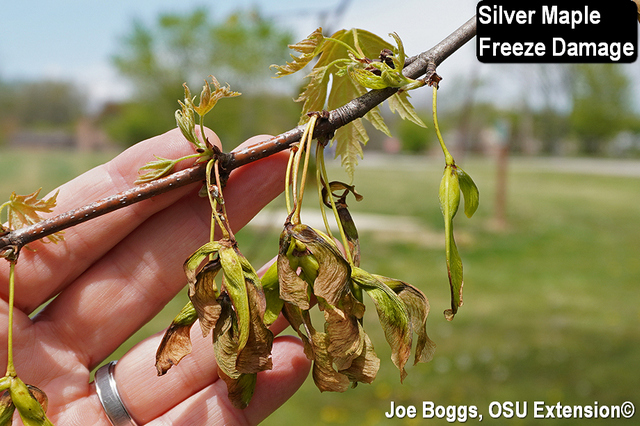 However, research has shown that another important variable must also be considered.  As with oaks, sugar maples exhibit synchronous seed “masting” in which all trees in a population produce heavy seed in certain years.  It is thought synchronous flowering by wind-pollinated trees enhances the success of pollen finding its way to receptive flowers.  Also, heavy seed production can overwhelm seed predators which enhances successful maple stand regeneration. 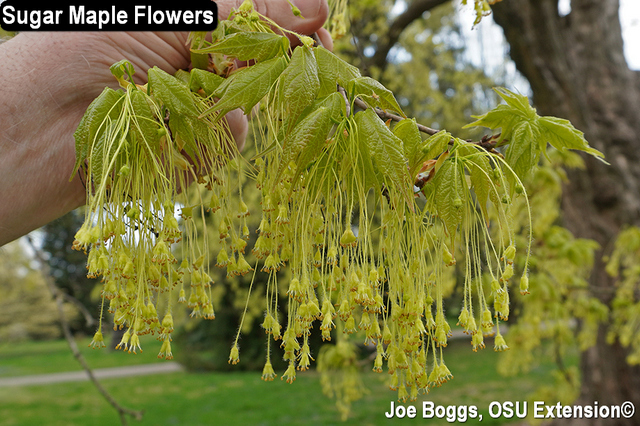 Thus, heavy seed production occurs with the convergence of two events:  a heavy “masting” year for the maple trees coupled with the lack of a killer freeze.  It appears that maples in many areas of Ohio dodged the frozen bullet that put the kibosh on beautiful magnolia bloom displays.

The bottom line is that while heavy maple seed production is not consistent throughout Ohio, Indiana, and Kentucky, it’s substantial enough in many areas to noticeably affect leaf expansion.  The good news is that full canopies will eventually prevail; it will just take a little longer on trees that have produced a lot of seed.