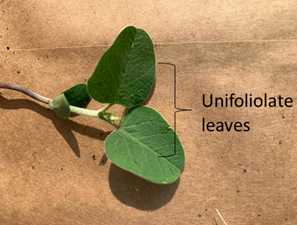 Across the state, soybean growth and development is variable, ranging from early vegetative stages to flowering. However, there has been some confusion regarding the identification of the VC and V1 growth stages. This confusion is mostly due to two definitions of V1…that actually mean the same thing. The Fehr and Caviness Method (1977) is based on the number of nodes that have a fully developed leaf, whereas Pederson (2009) focuses more on leaf unrolling so that the leaf edges are no longer touching. The VC definition for both methods is the same, but the differences start to appear between the methods at V1. Fehr and Caviness define V1 as “fully developed leaves at unifoliolate nodes,” which also means that there is “one set of unfolded trifoliolate leaves unrolled sufficiently, so the leaf edges are not touching.” This second definition is common in extension publications (Pedersen, 2009). END_OF_DOCUMENT_TOKEN_TO_BE_REPLACED