Sclerotinia stem rot – The nights have been cool this growing season, even when the days were very warm. The fog this morning in Wayne County reminded me that this is the time of the year to begin to scout for this stem disease.  Sclerotinia is caused by a fungus that survives from season to season and over several years from sclerotia.  The infections actually occurred during flowering when the canopy was closed, and cool nights can really enhance and favor this disease.  For this disease, disease levels can reach 20% incidence before there is a measurable yield loss.  Sclerotinia will occur as single plants or a small patch of dying plants, that wilt and turn a deeper olive green color. Look at the stem and white fluffy growth will appear on the stem, this is the sign of the fungus. 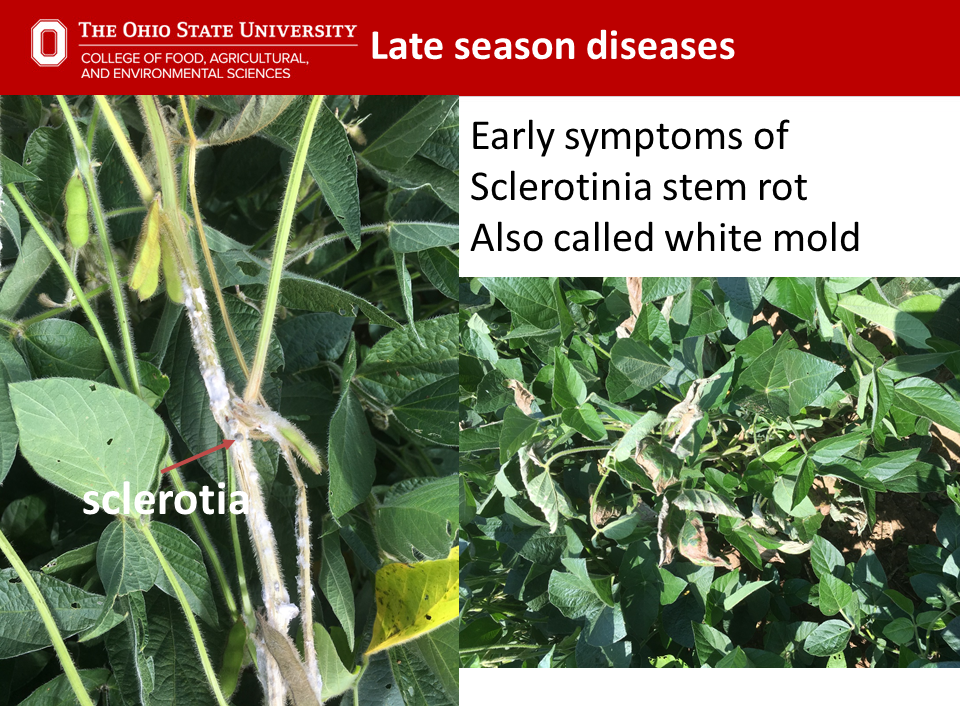 Sudden Death Syndrome – reports that this disease is also beginning to develop in some areas of the state where soybeans are reaching R6. Symptoms include irregular yellow spots, which turn brown or necrotic between the veins.  Interestingly the veins are surrounded by green.  The center of the stem or pith is bright white in this disease.  This is a fungal pathogen and infections most likely occurred shortly after planting and this fungus causes extensive root rots.  The figure has both susceptible and resistant cultivar.  There is a look-alike symptom caused by triazole fungicides when applied under hot conditions.  To separate these two, if a triazole had been sprayed, look at the roots.  The roots will be very healthy where SDS, the roots, and the center of the taproot are discolored. END_OF_DOCUMENT_TOKEN_TO_BE_REPLACED