Join OSU Extension’s Water Quality Team for the third installment of their Certified Livestock Manger (CLM) Webinar Series! The webinar to be held from 10-11:30AM on Monday, December 5th will discuss how to utilize manure as an organic fertilizer on your operation. END_OF_DOCUMENT_TOKEN_TO_BE_REPLACED Tractor and fertilizer spreader in field

This 3-hour training is for individuals who are obtaining their Ohio Agricultural Fertilizer Applicator Certification for the first time (not recertification). Agricultural Fertilizer Certification is required for applications to more than 50 acres of crops grown for sale in Ohio. It is not required for lawn and landscape fertilizer applications. This training will be held online as a webinar. Following the completion of this course, we will collect your information to be transferred to the Ohio Department of Agriculture. If you currently hold a pesticide license, your license information will then be updated to include fertilizer certification. If you do not hold a pesticide license, you will be sent an invoice to collect your certification fee. Once the fee is received by the Ohio Department of Agriculture, you will receive your fertilizer certification.

END_OF_DOCUMENT_TOKEN_TO_BE_REPLACED

Tragedy struck a farm family in Mercer County when three brothers were killed after entering the manure storage on their dairy farm. This is an unimaginable loss and one that occurs way too often. It is hard to stand by and wait for help when a loved one is unconscious in a dangerous situation but we see time and again how entering to save them often leads to the death of another family member. Please be aware of all the dangers on your farm and inform your family and employees as well. To learn more about manure gasses, read this fact sheet. From information gathered in a public records request, the foundation believes the state of Ohio has rejected a recommendation from an independent consultant, McKinsey & Co., to promote 50 ppm as a limit for manure, even though Dorothy Pelanda, Ohio Department of Agriculture director, showed support for that in 2019. The firm was paid $1.5 million to provide advice to the DeWine administration for its H2Ohio program, which aims to improve water quality statewide through better farming techniques, more and improved wetlands, better pipelines, and other measures. END_OF_DOCUMENT_TOKEN_TO_BE_REPLACED 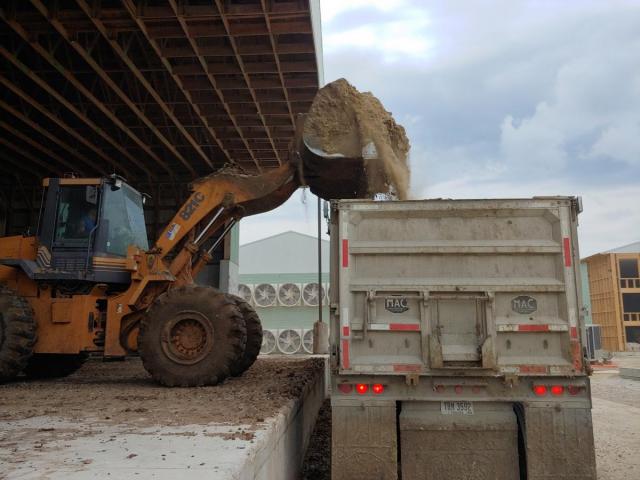 Stockpiles of poultry litter can be seen in farm fields across Ohio. While common each year in wheat stubble fields, there also many stockpiles in soybean fields. Poultry litter is an excellent source of plant nutrients and readily available in most parts of the state.

Both swine and dairy manure can be used to add moisture to newly planted soybeans. It’s important that the soybeans were properly covered with soil when planted to keep a barrier between the salt and nitrogen in the manure and the germinating soybean seed. It’s also important that livestock producers know their soil phosphorus levels, and the phosphorus in the manure being applied, so soil phosphorus levels are kept an acceptable range. END_OF_DOCUMENT_TOKEN_TO_BE_REPLACED

From the Ohio Pork Council

The 2019 North American Manure Expo is being held on July 31st and August 1stat Fair Oaks Farms in Indiana. This event is a great opportunity to see new manure technology, gain knowledge through educational sessions, and see equipment being demonstrated.

The Expo kicks off on Wednesday, July 31st with tours in the morning followed by liquid manure agitation demonstrations, special industry presentations, and the trade show in the afternoon.