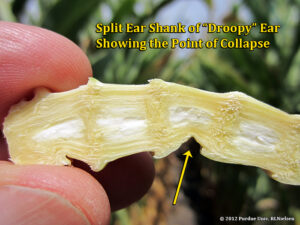 Droopy ears are cute on certain breeds of dogs, but droopy ears on corn plants prior to physiological maturity are a signal that grain fill has slowed or halted. Ears of corn normally remain erect until some time after physiological maturity (black layer development) has occurred, after which the ear shanks eventually collapse and the ears decline or “droop” down. The normal declination of the ears AFTER maturity is desirable from the perspective of shedding rainfall prior to harvest and avoiding the re-wetting of the kernels. PREMATURE ear declination, however, results in premature black layer formation, lightweight grain, and ultimately lower grain yield per acre.

What Causes Premature Droopy Ears? The most common contributing factor is severe drought stress that extends late into the grain-filling period. I have seen droopy ears in quite a few fields around Indiana these past few weeks in areas afflicted with severe drought stress. Even though Indiana has not experienced a lot of excessively hot (≥ 95o F) days in 2020, drought conditions coupled with sunny days and unusually low humidity (i.e., low dew point temperatures) result in significant evapotranspiration demands on the crop during grain filling. In most of the affected fields, the severity of leaf rolling and premature leaf death (senescence) due to drought stress was also high. END_OF_DOCUMENT_TOKEN_TO_BE_REPLACED Figure 2. Tar spot symptoms on leaves both on the lower and the upper canopy. (Photo Credit: Darcy Telenko)

While I have been out in Paulding county scouting in the last week, I have not noticed any tar spot in our cornfields as of yet.  It could be there though as I am not walking in every field. I wanted producers to take note of what Tar Spot looks like and some monitoring from our neighbors in Indiana and information from a previous CORN New Article.  END_OF_DOCUMENT_TOKEN_TO_BE_REPLACED 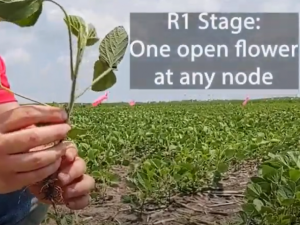 A new suite of crop staging videos has been built by faculty at The Ohio State University that highlight corn, soybean, and alfalfa. The videos highlight some common staging methods for each crop and connect the staging guidelines to practice using live plants in the field. The videos can be found in the “Crop Growth Stages” playlist on the AgCrops YouTube Channel: https://www.youtube.com/channel/UCbqpb60QXN3UJIBa5is6kHw/playlists. These compliment some of the wheat staging videos previously posted on the AgCrops YouTube channel as well. As the crops progress through the reproductive stages, expect some more videos to be posted! END_OF_DOCUMENT_TOKEN_TO_BE_REPLACED Gasoline demand recovered to almost 89 percent of pre-coronavirus lockdown levels in early July.  Despite this positive development, the recovery in demand flattened out over the last few weeks.  Gasoline stocks began to recede but still sit substantially above levels seen at this time of the year.  Attempts to reopen the economy hit a snag as the virus spread rapidly around the country after initial hopes saw a rapid opening in many areas.  At 8.648 million barrels per day, demand recovered substantially from the low point of 5.311 million barrels per day seen in early April.  The path back to normal gasoline demand levels appears stalled.  Ethanol production followed this recovery and will feel the implications of flattening gasoline use. END_OF_DOCUMENT_TOKEN_TO_BE_REPLACED