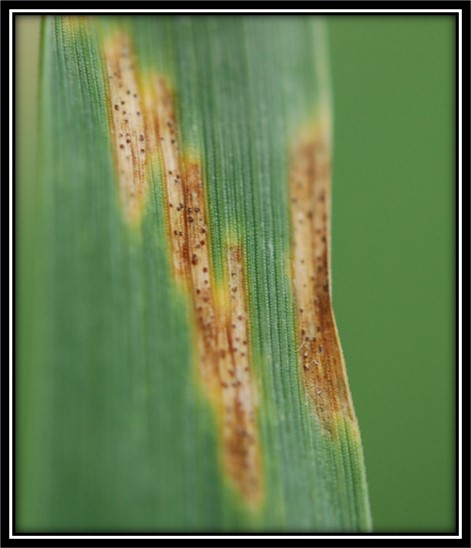 Like many other foliar diseases, Septoria reduces grain fill and the size of the grain. It usually does not affect the number of spikelets per spike, an important yield component that is defined very early in the development of the plant. A fungicide application at this time will control Septoria and powdery mildew, another disease that usually shows up early under cool conditions, protect the flag leaf and minimize grain yield loss. If the weather conditions continue to be rainy and favorable for foliar disease development, spores will continue to be produced or blown in from other areas, and new infections will occur, particularly if the variety is susceptible.

Results from previous studies have shown that the greatest benefits from foliar fungicide applications were seen when applications were made to a susceptible variety between Feekes 8 and 10. This is largely because most of our major foliar diseases usually develop and reach the flag leaf after Feekes 8-9. However, the residual effects of a Feekes 8-9 fungicide application will not adequately protect the head from late-season diseases such as head scab and Stagonospora glume blotch or the flag leaf from rust and Stagonospora leaf blotch. In addition, some of the fungicides that effectively control foliar diseases are ineffective again or are not recommended for control of, head scab.

There are several very effective fungicides available for use on wheat (see resource chart). Carefully read labels before making an application.