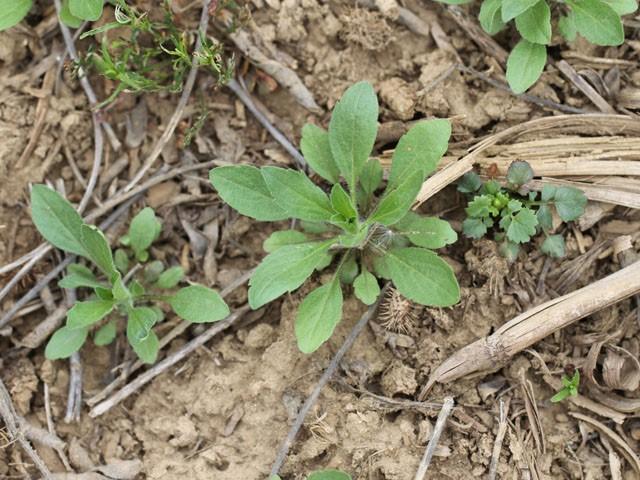 Fall herbicide treatments have fallen off over the past several years for a couple of reasons, among them the effectiveness of new soybean trait systems for managing marestail, some generally crappy weather in late fall, and efforts to reduce input costs.  We are seeing a resurgence in some weeds, such as dandelion, which respond well to fall herbicides, though.   Some growers have also experienced issues with messy fields and late spring burndowns that could have been avoided with fall herbicides.  It’s worth recalling the history of fall herbicide applications, which helps explain some of their benefits, especially if you have not been managing weeds or making recommendations for as long as some of us have.

In the late 1990s, a few years after the initial introduction of Roundup Ready soybeans, a number of growers were experiencing problems in spring with dense infestations of winter annual weeds – chickweed, purple deadnettle, mustards, cress leaf groundsel, etc – and also dandelion.  These weeds were generally interfering with spring tillage and crop establishment, slowing the drying and warming of soils, and also harboring insects.  Spring burndown herbicides could be variably effective and, under cool conditions, slow to kill the weeds.  One of the reasons for the increase in these weeds was the use of the only glyphosate in soybeans and the oversimplification of herbicide programs.  This included a failure to apply burndown early enough (the “hey I’ll just plant soybeans into weeds and spray glyphosate whenever I get around to it” approach), which allowed winter annuals to go to seed, and a failure to include residual herbicides, some of which could possibly persist long enough to shut down some of the late-season winter annual weed emergences.  This approach also allowed dandelion to proliferate and become more difficult to kill because it had too much time to increase its root size and go to seed unimpeded.  We recall walking fields infested with dandelions in the fall where the weeds were so dense we almost could not see the soil.  Application of herbicides in fall largely solved these issues, providing for a weed-free seedbed well into spring, and reducing dandelion back to manageable levels.

Fast forward to the mid-2000s when glyphosate-resistant marestail became widespread.  While the spring-applied mix of glyphosate and 2,4-D worked for a while on marestail, the increase in the level of glyphosate resistance shifted all of the work to the 2,4-D, which is really only about 70% effective on overwintered marestail.  The net result was a failure of many burndown treatments for control of the overwintered plants.  The solution was a fall application of 2,4-D mixtures, which controls fall-emerging plants so that the spring burndown has to control only small spring emergers.  Fall herbicide treatments have been standard components of marestail management programs for many growers since then.  More recently, the availability of some alternative spring burndown treatments that can include Sharpen, glufosinate, Gramoxone, and/or dicamba have reduced the need for fall herbicide treatments on marestail.  A consequence of this, along with a move once again to oversimplify herbicide programs,  appears to be an increase in dandelion and winter annuals again.  The Xtend, Enlist, and LibertyLink soybean programs cannot adequately control some of these weeds if not used in an integrated, multi-application system that includes an occasional fall herbicide treatment.  The bottom line here is that fall-applied herbicides, even if used only every other year or so, go a long way toward preventing issues with these weeds and maintaining a more problem-free no-till planting situation.  This can be especially true when wet weather in spring delays herbicide application and planting, and the result is a big, dense weed population that herbicides struggle to control.  Fields with a fall herbicide treatment are likely to stay much more manageable into late spring compared to those without.

So this is just a suggestion to think about making fall herbicides part of the weed management program again, and especially where the increase in winter annual weeds, dandelion, wild carrot, and curly dock has been noticeable and problematic.  We have previously run articles in C.O.R.N. that cover the details of fall herbicide treatments, and this information really has not changed much.  Links to some these articles below:

Dandelion – King of the Weeds – is making a resurgence (Youtube video)