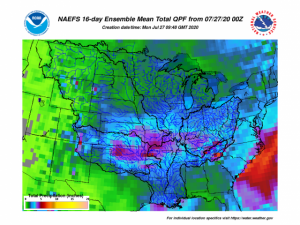 The August outlook for rainfall indicates somewhat improving conditions. There is uncertainty here due to tropical moisture and where it flows. Normal rainfall is in the 3-4 inch range and rainfall is expected to average in the 2-4 inches range with a few higher totals. This will put us a lot closer to normal wetness. The 2 inch totals are more likely in northern Ohio and the 4 inches totals are more likely in southern Ohio.

It appears that the scattered drought conditions in Ohio are likely peaking and some improvement is possible over the next several months.

The outlook for September to November for the end of the growing season into harvest season suggests warmer than normal weather will persist and low chances for an early freeze. Rainfall is shaping up to not be too far from normal.