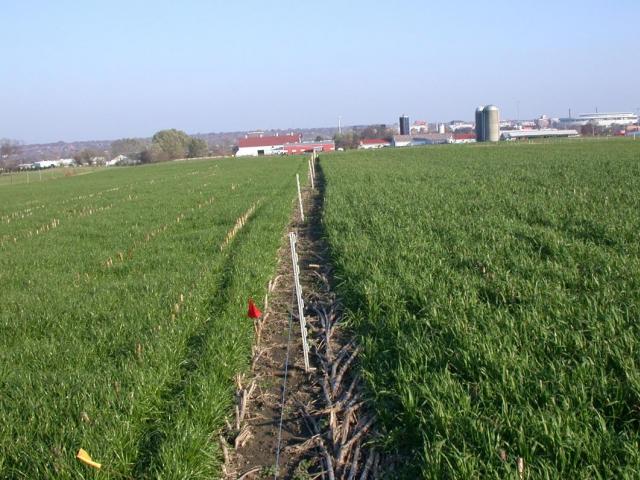 Short-season forages planted in late summer can be sources of highly digestible fiber in ruminant livestock rations. There are several excellent forage options that can be considered for no-till or conventional tillage plantings in the late summer or early fall planting window. These forages can be a planned component of the overall forage production plan. They can be utilized on land that would otherwise sit idle until next spring, such as following wheat or an early corn silage harvest.

Oat or Spring Triticale silage
These cereal forages can be planted for silage beginning the last week of July and into early September. Dry matter yields of 1.5 to 3 tons per acre (about 5 to 5.5 tons at 30 to 35% DM) of chopped silage are possible if planted in late July to early August. Harvesting between late boot, or early heading, will optimize quality. Yields will be lower for plantings made in early September, in which case late autumn grazing would be a more viable option.

The potential feed value of oat silage can be similar to mid-bloom alfalfa.  As a grass, maximum inclusion rates in diets for animals with high nutritional demand (e.g. lactating cows) are less than those for alfalfa, but it is a very acceptable feed.

Spring Triticale is the biotype of the hybrid cross between cereal rye and wheat (there is also a winter biotype that acts like winter wheat). In our research, oat averaged slightly higher fall yields than spring triticale, but this varied across years. If cut at the proper maturity, spring triticale forage has a higher feed value than oat, similar to early-bloom alfalfa. Seed cost for spring triticale is usually higher than oat, but it is later maturing than oat or barley and will maintain its forage quality for an extended harvest window.

About 50 lbs of nitrogen per acre will be needed to optimize the yield potential of these cereal forages following wheat. Following corn silage harvest and especially if manure is applied before planting the short-season forage, there likely will be no need for additional nitrogen application.

Check herbicide rotation restrictions from the previously planted crop. Other potential challenges include rust infection, especially with oat. Rust could impact yield and feed quality and depends on when the infection of rust occurs during the growing season.

Italian Ryegrass Silage
This grass emerges as fast as oats and could produce up to a ton of dry matter per acre in the fall if planted in August, and less yield if planted into September (it should be planted by mid-September at the latest). This crop would also be available for additional cuttings next year, starting in late April or early May and then every 25-30 days into June or early July.

In our research, fall harvest and three additional harvests the following year have shown total yields between 3 to 5 tons of dry matter across all the harvests when improved varieties of Italian ryegrass are planted and winter survival is good. Italian ryegrass can winterkill in severe winters. It is important to not allow a lot of growth going into the winter to avoid mold growth that damages the stand. To avoid this, make a late fall cutting or graze to a height of 3 inches late in the year.  This crop will shut down by mid- to late-summer the year after a fall establishment. It would fit best in a rotation with sorghum-sudangrass or forage sorghum planted in early July.

Harvesting Italian ryegrass before heading optimizes quality, as with all grasses.  When planted in September and harvested in late fall, the quality will be superb (NDF around 48% and NDF digestibility about 80%).  August plantings harvested in late fall will be slightly lower in quality with crude protein in the mid-teens and NDF in the mid-50s.  Next year, the crop will head out quickly at each harvest and will be a medium quality forage. But with proper diet formulation, it can be used even in lactating cow rations.

Summary
Utilizing short-season forages can provide excellent quality forage to supplement other forages such as corn silage and alfalfa or perennial grasses, while also increasing land-use efficiency. Maintaining forage cover year-round protects the soil from erosion and contributes to building soil organic matter over the long-term.