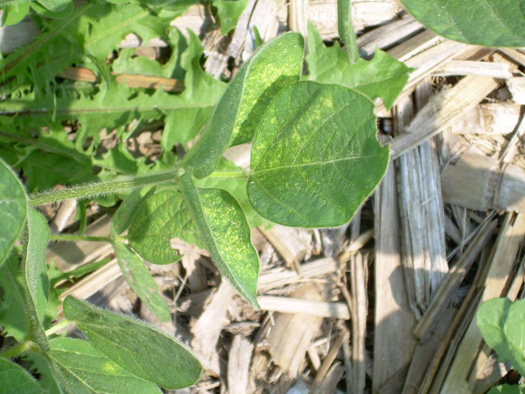 With continued dry weather, spider mites are one of the main pests to remain vigilant about in field crops.  They will often show up in field borders first as they move in from other habitats, for example, if nearby ditches have been mowed.  Spider mites are difficult to see.  Look for injury signs — yellow spotting or stippling on the upper side of leaves.  In soybeans, this damage usually begins in the lower canopy and progresses upward as the mite population increases.  Heavily infested leaves may also have light webbing similar to spider webs.

There are no number-based thresholds available for mites, in part because counting them is not practical in a scouting context.  During drought, populations can increase rapidly so scouting every 4 to 5 days in recommended during drought conditions.  Walk a broad pattern in the field and examine at least two plants in each of 20 locations.  Use the following scale developed by the University of Minnesota to evaluate spider mite damage in soybean, with treatment recommended at level 3.  There are relatively few products available for the treatment of two-spotted spider mites and some pyrethroid insecticides may actually “flare” spider mite populations, making them worse.

0. No spider mites of injury observed

5. Lower leaf loss common, yellowing or browning moving up the plant into the middle canopy, stippling, and distortion of upper leaves common. Mites present in high levels in the middle and lower canopy