When you started your day today, you probably groaned at the sound of your alarm clock as it went off next to your bed. You look over and sigh, knowing that you have about five classes to get to today, and your first one starts in about an hour. You hit the snooze button, rest for a few more minutes, before finally getting up and going to your class. You get to your class, you sit down, and open your laptop and get ready to take notes – or browse amazon for a new pair of shoes. You feel comfortable, listening to the words of your professor, knowing that you will be leaving this classroom in about fifty-five minutes. You know that if anything crazy were to happen on campus, the government would be there to step in and mediate the situation. Afterall, the police are only a few minutes away. However, this picture looks a bit different in the country of Somalia, as children get ready to go to school they question if today is going to be the day the government’s Army or worse, the terrorist organization Al-shabaab, will come into their classroom and take them away from their friends and families in order to fight in the ongoing conflict. No child is safe, and if the teacher resists, they will be shot down in front of their students  to make them an example of what happens when you do not obey the ones with guns.1 This is the reality in Somalia, and several other nations around the world – Predominately in Africa2 – In which children are Recruited into being Child Soldiers by means of force, coercion, abduction, and threat to their families in order to Fight and Die in the ongoing conflicts in their nation.

The United Nations, in accordance with Article 3 Paragraph (a) of the Protocol to Prevent, Suppress and Punish trafficking in persons, states that Human trafficking is any activity involving the Recruitment by means of Abduction or Use/Threat of Force  in order to Exploit, Force Labor, or for Sexual actions.3 Therefore, if we were just following the strict definition put forth by the United Nations, it would be clear to see that the use of Child Soldiers is not only a moral issue, but an issue of international law as well. Yet, despite it being an international crime, organizations in Africa still utilize children as cannon fodder for their armed conflicts. While it may be understandable to see why a terrorist organization, whom already has no adherence to legal guidelines 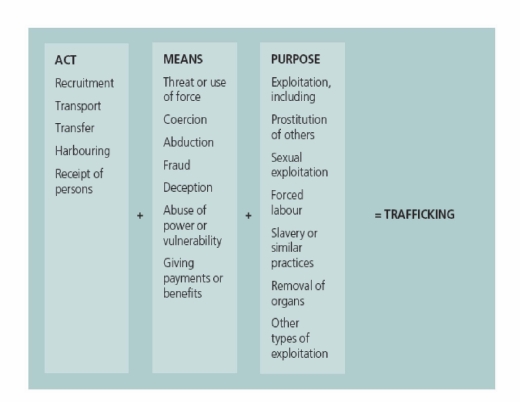 established by the state, it is most bothersome when the state itself, Somalia, is employing child soldiers in its army in order to combat those same terrorist organizations.2 Additionally, it’s all too easy to look at this issue and say “Yes, that’s human trafficking.” but it’s important to understand why it’s human trafficking and why organizations choose to utilize children in their actions.

Why are Children in Demand for War

Reported reasons for the use of child soldiers varies from source to source, and ultimately upon who you ask. The reason for this is immense, as these child soldiers range from being used on the front lines to fight, to conducting day to to day tasks such as cleaning. Much like any military, there are a multitude of jobs that need to be filled, and not all of them are as war fighters. For some, these are considered the lucky ones, as they do not have to brave the hazards of the battlefield to survive. However, this is not the case for all…

In Somalia, more than half of the entire population is comprised of Children4, it would seem to make sense that any armed conflict would encompass the use of children. However, it’s important to note that this is not the only argument that is made. The children are often seen as expendable, they can be “reproduced” in a “short time span” and are very easy to manipulate, being more psychologically pliable in comparison to an adult whom typically already has their personality and ideals in place. If a child is stripped away from their friends and family the child will typically pursue a new authority figure.

[A child might]…transfer loyalty to another adult, especially one who holds the power of reward and punishment. They can be psychologically manipulated through a deliberate programme of starvation, thirst, fatigue, voodoo, indoctrination, beatings, the use of drugs and alcohol, and even sexual abuse to render them compliant to the new norms of child soldiering.5

Child soldiers are used for: cooking, cleaning, ammunition and message runners, combatants, and even for sexual exploitation.  With the wide spread abuses of children, involving over 6,000 confirmed cases of child soldiers in which 70% were recruited for Al-Shabaab, the other 30% for the state army,  one might question what their living conditions are and why this malicious use of children seems to go ignored.6

What are their Conditions

Living conditions for children in Somalia is far from ideal. Without being pulled into the military services of the Somalian Government or Al-Shabaab, children in Somalia face death from environmental factors. Without proper medical coverage, or even a national health authority, 80% of Somalian’s go without medical care.7 Additionally, the country still remains in a post-conflict society that is always on the verge of a violence resurgence. This means that children are always in a constant mental state of a possible combat and attack. Finally, only 38% of children in Somalia will ever attend school.5

These conditions help drive recruitment efforts. If a child is deemed expendable5, then it is easier to dismiss any medical concerns they might have. Additionally, with only 38% of children ever attending school7, it is far too easy to indoctrinate them into the system of soldiering that is required of them. In essence, with the median population only being 16.64, it is more vital to keep the older population alive than it is the younger. It’s hard to change the living conditions and emotional state of mind an adult has, but far too easy to abduct a child and indoctrinate them into the military system.

Finally, in terms of conditions, they are even worse for female children in Somalia. over 90% of girls will face class III genital mutilation, also known as Infibulation. This process, while condemned publicly by the government, still occurs within the society. However, an appeal to voluntary recruitment as a female child is that one can avoid the process of FGM under Al-Shabaab.8 The Islamic terrorist organization has banned the practice of FGM, and thus provides some protection for female recruits… However, that’s not to say that they are then spared from any sexual violence that occurs under Al-Shabaab.9

In 2008, the United States passed the Child Soldier Prevention act which removed the United States’ ability to trade with any state that openly endorses and uses children to fight their wars. Additionally, it requires the state department to publish an annual report, much like the TIP report, in which states which nations around the world utilize children in their military. However, the president can waive this law in order to support economic growth, and in doing so President Obama has authorized over $1 billion in arms sales to these organizations.10

Worst of all, unlike sex and labor trafficking, which are the two predominant forms of human trafficking, child soldiers do not possess any special visas that would allow them to come to America for rehabilitation. Also, no visa bans exist on any member of the groups that recruit children (a ban for that purpose).11

All-together, it’s clear to see that through the Recruitment by means of Abduction or Use/Threat of Force  in order to Exploit, Force Labor, or for Sexual actions, child soldiers are in fact a form of human trafficking and it goes unnoticed to the public. Most of it has to due with a lack of relativity to the United States, and the majority of the first world. After all, we can see and experience sexual and/or labor trafficking. It is all around us in the United States, in Europe, and all around the globe. However, child soldiers tend to be mostly predominant in African nations.12 It is because of this disparity that it goes unnoticed, after all, it doesn’t apply to us. As they say, ignorance is bliss.