We have received an unusual number of reports about fall armyworm outbreaks particularly in forage including alfalfa and sorghum sudangrass, and in turf.  Certain hard-hit fields have been all but stripped bare (Figure 1). 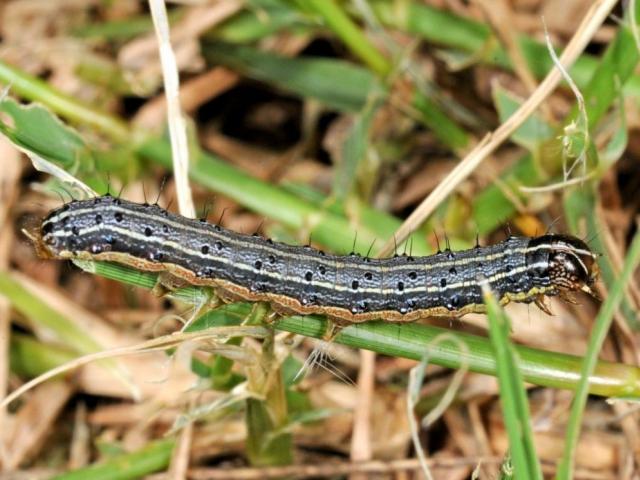 True or common armyworm is a different species than the fall armyworm.  The true armyworm is the species that causes problems in cereal crops in the spring of the year. Fall armyworm migrates into Ohio during the summer and could cause problems into late summer. It is not or maybe we should say has not typically been a problem in Ohio. Also, unlike the true armyworm that only feeds on grasses (i.e., corn, wheat, forage grasses), the fall armyworm has well over 100 different types of plants upon which it feeds including many grasses but also alfalfa, soybeans, beets, cabbage, peanuts, onion, cotton, pasture grasses, millet, tomato, and potato. Obviously, a few of these crops are not produced in Ohio, but several of them are. As a result, we encourage farmers to be aware of feeding damage in their fields, especially forage crop fields that’s where a lot of the action seems to be right now. 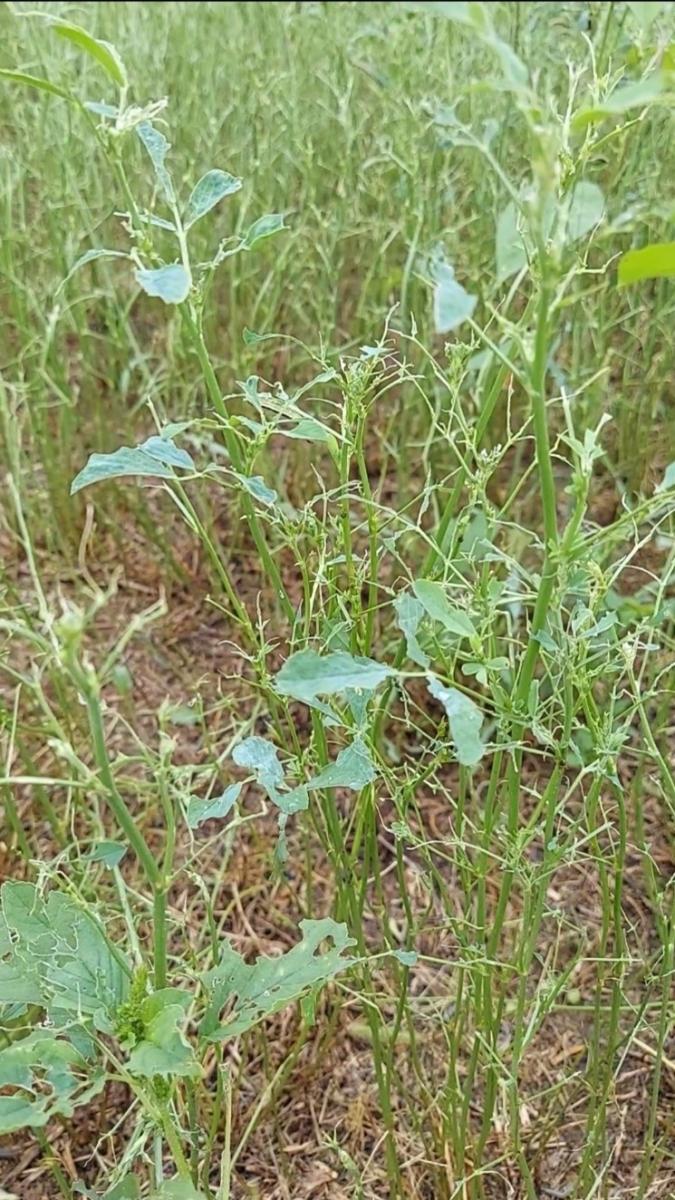 Fall armyworms are much easier to kill when they are smaller, and feeding accelerates rapidly as they grow, so early detection is important.  Look for egg masses glued not only to vegetation but to structures like fence posts.  Egg masses have a fluffy-looking cover (Figure 2).  When the cover is peeled back, eggs are pearly and tan when new, and turn darker as they approach egg-hatch.

Fall armyworm caterpillars vary in color from greenish to tan to dark brown with stripes along the body.  They can be easily confused with other species, but a good identifier is an inverted white “Y” shape behind the head. (Figure 3). Another species, true armyworm, feeds at night but fall armyworm will feed during the day. 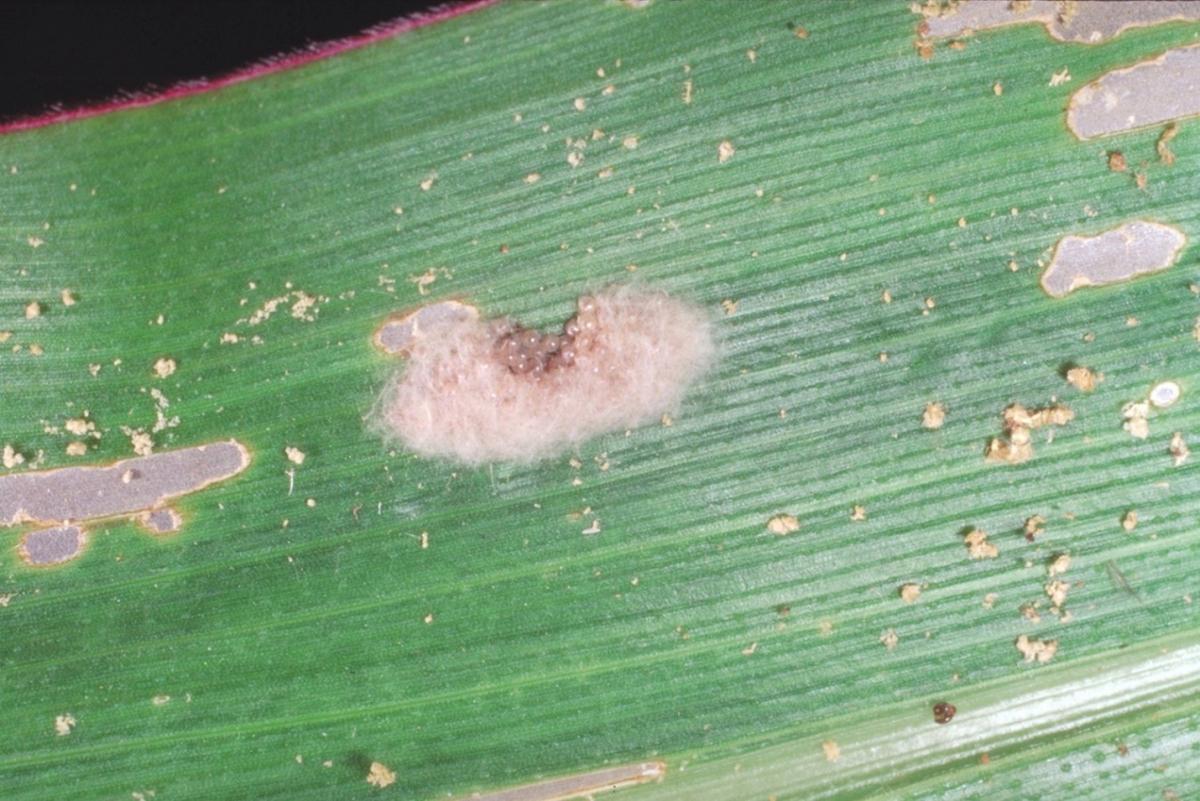 Insecticides will not penetrate egg masses well; it’s best to spray caterpillars when they are less than ¾ inches long, at which point most armyworm-labeled pyrethroids will kill them reasonably well.  For larger caterpillars, products containing chlorantraniliprole will provide longer residual which may help with control of the harder-to-kill caterpillars over ¾ inches.

In forages, a threshold that can be used is 2-3 fall armyworm larvae per sq foot.  If larvae are smaller (less than ¾ inch), they can still do a lot of feeding and are worth treating with an insecticide application. An early cut can help limit damage to the alfalfa, but one must check the field for survivors.  If survivors are abundant, an insecticide application may be warranted to protect nearby fields.  Armyworms get their name from moving in large bodies (marching) to new feeding areas. 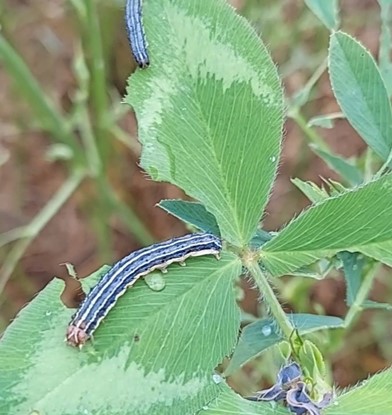 In corn, armyworms can randomly feed on leaves, with holes occurring throughout the leaf surface. The more damaging stage is when they feed on developing silks and kernels after entering the ear. Once they enter the ear, control by insecticides is much more difficult.  Most Bt corn varieties with above ground protection is labelled for armyworm control, but resistance to several Bt traits has appeared in the US.  While we have not found Bt resistance in armyworms in Ohio, we would recommend growers scout ALL corn (Bt or non-Bt) for any evidence of damage or resistance. If feeding is found, please contact us (tilmon.1@osu.edu, or michel.70@osu.edu) or your local extension educator.

Fall armyworm does not overwinter in Ohio.  Moths come up from the South early in the season and temporarily colonize the area, especially in grassy areas.  The current caterpillars are second generation.  If we have a warm fall we could possibly see a problem third generation, especially in forage, cover crops, and winter wheat planted before the fly-free date (see Figure 4). Because of this, scouting for fall armyworm should continue for the rest of the season. Closely observe hay and pasture crops even after cutting or grazing, especially where the crop was heavily damaged. Additional treatment later might be necessary. Moths prefer light-colored surfaces for egg-laying. Check fence rails, fence posts, and tree limbs in and around pastures and hayfields Figure 4. Fly Free Dates in Ohio. Wheat planted after this date have lower risks of damage from Hessian Fly as well as other pests, including fall armyworm and aphids that spread wheat viruses

Hay fields that are near harvest should be harvested now, and then the regrowth closely monitored for fall armyworm activity. In Kentucky, the fall armyworms have been reported to be present in hayfields after harvesting the crop off. This and the fact that we could get another generation are reason to continue monitoring closely.

Badly damaged alfalfa or grass hay fields should be cut and then rested the rest of this fall with no fall cutting. Fertilize according to soil test recommendations. Monitor the regrowth closely to catch any re-infestation that occurs. Established alfalfa should come back from fall armyworm damage. Recovery of the cool-season perennial grasses will depend on the relative severity of the damage, the overall health of the stand going into the infestation, and how many young tillers were not consumed. It is hard to predict how they will recover, time will tell.