The distinctive toxicity of Norbormide has been determined by performing animal experiments by using various species of rodents. The toxic dose was orally administered. Rats, particularly the female species, experience even after given the small amount of Norbormide the effects of the toxin. Norbormide is toxic to guinea pigs and mouse either, but to a lesser degree. There is no consistent evidence accessible about LD50 standards in humans. Even though, Norbormide is a rodenticide, and specifically toxic for brown rats, human beings could be visible to Norbormide through inhalation and dermal contact.

Norbormide is precisely toxic to rats, but it’s moderately harmless to other rodents and mammals. In all animals tried and also in the rat aorta and extravascular smooth muscle tissue, Norbormide displays vasorelaxant properties in the arteries. Additional effect of Norbormide is stimulation of corticosterone and aldosterone release in both rat and mice adrenal gland by enhancing late phase of steroid-hormone synthesis. 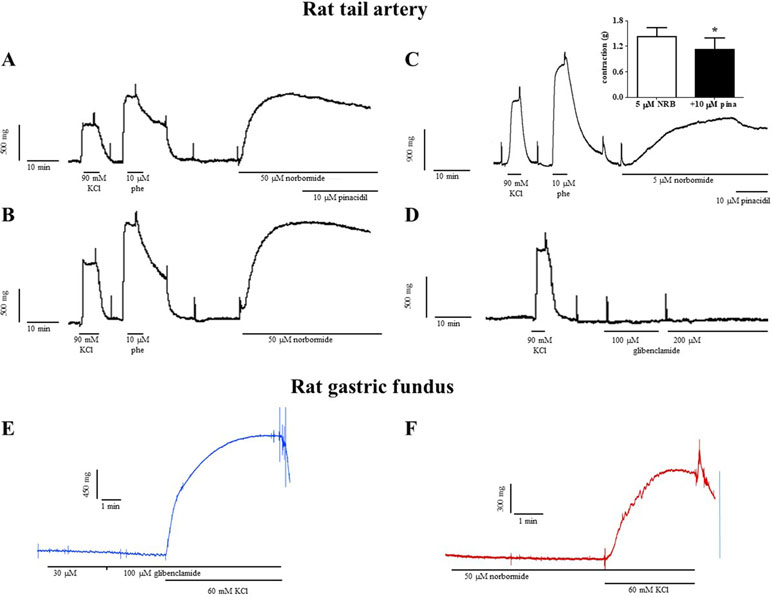 Signs and symptoms of toxicity

The influences of norbormide are caused by the endo-isomers, but the exo-isomers R, T and X showed no contractile effects on the rat arterio smooth muscle. There was only a relaxing result on the muscle. In animal studies of Rozkowksi, he indicated that the impacts that are triggered by Norbormide are irretrievable .Additional study has revealed that there were respiratory depressions after the cardiovascular effects in the rats which were treated with norbormide in vivo. Symptoms in rats are mild and short-lived compared with other rodenticides. Norbormide has no chronic toxic effects on non-target species. For example, following treatment for up to 60 days, dogs tolerated a dose equivalent of 1000 ppm without ill effect. At 10,000 ppm they lost appetite and looked ill . Pharmacokinetic studies indicate Norbormide is readily metabolized and unlikely to be persistent (Ravindran et al. 2009a, 2009b) and secondary poisoning studies conducted by Russell (1965) showed no ill effects in cats, dogs, and pigs. Humans given large doses exhibited a slight decrease in blood pressure which normalized after two hour.

However, there’s no evidence for  Carcinogenicity finding in Norbormide .

Reports of human volunteers ingesting up to 300 mg/kg displayed no clinical outcome, other than small reductions in both temperature and systolic blood pressure. Because this agent is basically nontoxic, no specific treatment is needed after ingestion. Parents are usually advised to watch the child in the home for four hours. All suicidal ingestions warrant prompt assessment for psychiatric intervention

Link to article on Specific toxicity in six rodent species from China of a new modified norbormide  ,

In vitro studies on liver preparations from rats and other rodents discovered that hydroxylation is the main procedure throughout the metabolism of Norbormide. Moreover, the metabolites amid the sexes of the rat appeared to diverge from one another. First and foremost when Norbormide had been incubated with the liver S9 fraction, a few metabolic products were observed. The S9 fraction has been defined as “Supernatant fraction acquired from an organ (usually liver) homogenate by centrifuging at 9000 g for 20 minutes in an appropriate standard; this fraction comprises cytosol and microsomes.” The S9 fraction consists of two constituent:

A combination of four active endo-isomers of NRB (U, V, W and Y) made four major metabolites in rat liver S9 and cytosolic arrangements after incubation. The isomers are distinctly not pure compounds, but research with pure V isomer and a mixture of U and V isomers pointed out that each isomer undergoes metabolism to be formed into a single product in rat. Mass spectrometry confirmed that all metabolites had a mass consistent with a hydroxylated metabolite of NRB. Because female rats are more sensitive to Norbormide than the male species, the level of metabolites are higher in females than in males. The same metabolites were found in guinea pigs, even though the levels of metabolism in these rodents are considerately lower equated to those in rats.

In mice two metabolites were perceived: 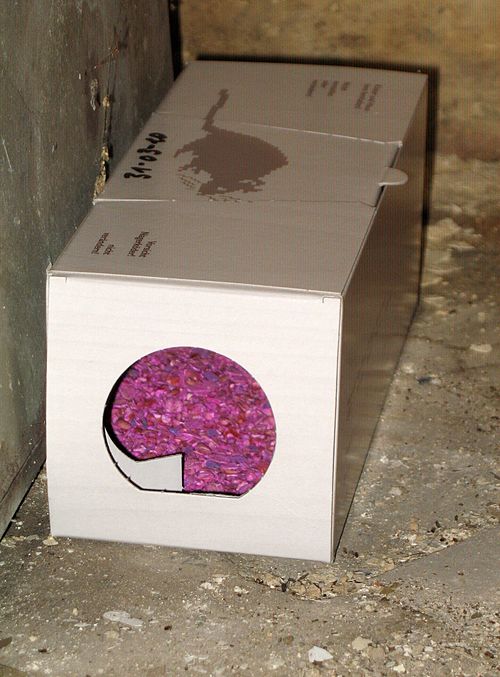 One metabolite of the V isomer (V1) which was also found in the rat preparations and,

Another, new metabolite of the V isomer (V2).

After getting blood from rats 10 and 30 minutes after oral administration, plasma and red blood cell fractions were evaluated in search for either parent compounds or hydroxylated metabolites. Though, neither was found, which either means that the absorption did not take place or the compounds underwent a quick clearance from the body. Whole blood samples certainly displayed traces of the parent compound and a metabolite (M3) with molecular mass of 226, in samples from both female and male rats. The level, in which this metabolite ensued, seemed to be once again higher in the female rats than in the male species. M3 was not found in any other rat or mouse tissue. This suggests that M3 may be formed by gut microflora in rats. After Norbormide had orally been given, an assessment of both rat and mouse liver discovered traces of the parent compound. Associating the metabolite levels in sexes and species, a meaningfully higher amount was discovered in the female rats than in the male rats or the mice. High Performance Liquid Chromatography (HPLC) chromatograms liver arrangements from female of and male rats show the detection of four metabolites (U1, V1, M1, M2).Mass spectrometry had been used to recognize these and effortlessly so, since the hydroxylated metabolites were +16 amu greater than Norbormide. This experiment established that the metabolites were alike to those found in the in vitro preparations. The metabolites were not found in mouse liver preparations. Moreover, neither Norbormide parent compound nor its metabolites were discovered in the heart after oral administration in rats as well as mice. This absence of detectable metabolites suggests that Norbormide is able to persuade a lethal effect at extremely low levels. 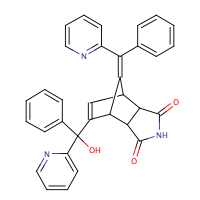 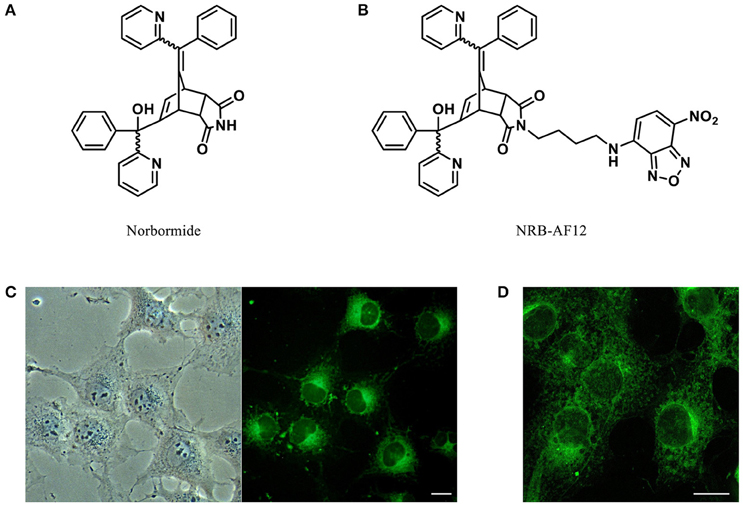 Norbormide (Raticate, Shoxin) is a toxic composite used as a rodenticide or an acute acting selective rat toxicant. It has numerous mechanisms of action, acting as a vaso-constrictor  and calcium  channel blocker, but is selectively toxic to rats and has relatively low toxicity to other species, due to a species specific action of opening the permeability transition pores in rat . mitochondria .It was discovered during routine screening of a diversity of agents for pharmacological activity at McNeil Laboratories, Fort Washington, Pennsylvania, USA. Norbormide was synthesized in the exploration for a novel anti-rheumatic drug. It was deliberated as a uncertain value for that movtive and  was  further  studied  as  an  appetite  suppressant originally  in house mice(Mus musculus)and  cats(Felis catus),  with  no  toxic  effects ,and  then  in  rats. The alterations in impressionable were so striking, it was at first assumed that a mistake had been produced. Nevertheless, the  uttermost  vulnerability  of  rats was  established  when  the  experiments  were  reiterated. It  was further  studied again and presented to representatives attending the 149th National  Meeting  of  the  Chemistry  Society  in  Detroit, Michigan  in  1965 as  a  infrequent  species-specific  rodenticide and marketed as Raticate and Shoxin. Its use reduced in the 1970s as anticoagulant toxins became more prevalent. Taste loathing had restricted its efficiency, and field efficacy outcomes were commonly sub-standard . Prior to the introduction of anticoagulants all rodenticides were acute-acting toxicants. Rodenticide study progressed remarkably between the 1940s and 1990. Sodium fluoro-acetate (1080) was established in the 1940s,  first  group  anticoagulant  rodenticides  in  the 1950s  and 1960s,and  cholecalciferol  and  second generation  anticoagulant  rodenticides  in  the  1970s  and 1980s,  partially  to  overcome  resistance  to  first  group anticoagulants  that  transpired  where  there  had been extended use of first group compounds. Anticoagulant rodenticides have been the foremost development for the control of rodents worldwide for both crop protection and conservation . The slow onset of action ensuing ingestion of anticoagulant baits helps confirm that even wary rodents will ingest sufficient toxic bait to cause death. Hence, it is not surprising that after the introduction of warfarin and the other anticoagulants, the importance of the non-anticoagulants was reduced, at least for commensal rodent control . This applied to Norbormide as well as the older poisons such as strychnine and arsenic, notwithstanding the remarkable species   specificity   of   Norbormide. Succeeding   the emergence   of   physiological   resistance   in   some populations  of  rodents, even  to  second  group rodenticides, the  finding  of  remnant  of  the  second-generation anticoagulants in wildlife and queries about the humaneness of second-generation  anticoagulants   attentiveness in non-anticoagulants, or at slightest less-persistent  ‘low  residue’  pesticides,  has  revitalized and study  on  a  variety of acute  acting  toxicants  including norbormide has progressed. 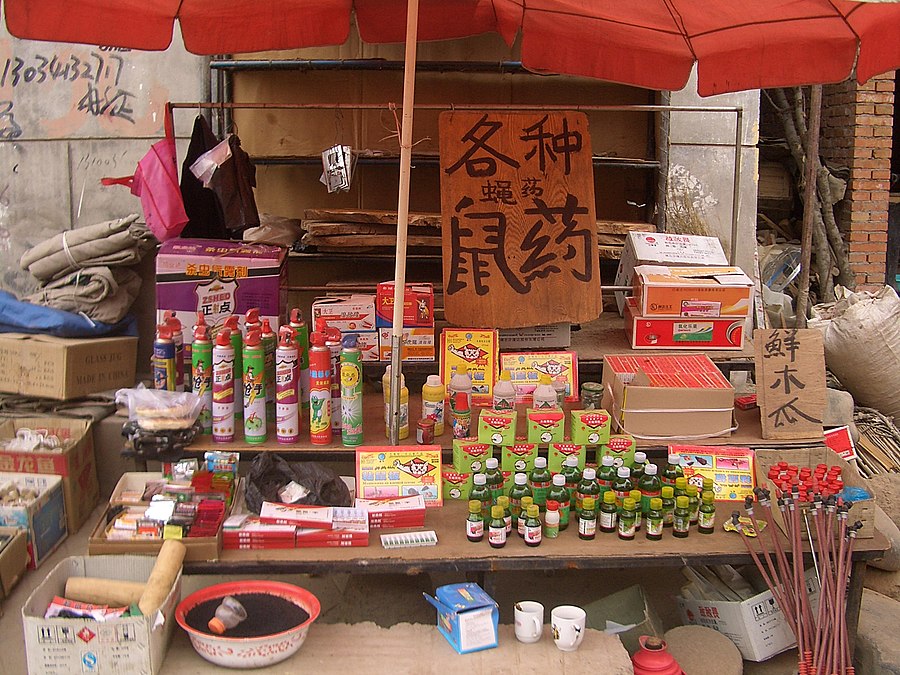 Norbormide provokes vasoconstriction  (narrowing)  of small arteries and vasodilation (widening) of large arteries in  rats ,  which  induces a  rapid  fall  in blood  pressure.  Death possibly results from circulatory disorders and heart failure . As  it  is  acute-acting  it  is  likely  to  be  more humane  than  most  other  rodenticides,  because  of  the somewhat short time to death and duration of symptoms of poisoning when associated with anticoagulant rodenticides and cholecalciferol. As noted above, norbormide is highly toxic to members of the genus Rattus compared with other mammals or birds . Rats are 150-fold and 40-fold more sensitive to norbormide than house mice and guinea pigs (Cavia porcellus) respectively, while most other mammals and birds tested are >200-fold less sensitive . Two  New  Zealand  research  teams, one  presently sponsored by the Department of Conservation Predator Free 2050  fund assisting Land care  Research  with  Orillion (formerly ACP Ltd),and the second generation through investment by Invasive Pest Control Ltd. ,are looking at different ways of  improving  the effectiveness  of  norbormide  and creating  it  in  forms  which  are  more  pleasant . If  either  or both groups  are effective,  it  will  be  a  huge  advance  for  targeted  pest control with no non-target influence.

Derivative and Mechanism of Action 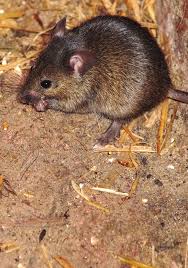 Research have been done in which was studied for derivative compounds of Norbormide that are more toxic. Addition or substitution of various groups never turned out to give considerably more toxic compounds. In most cases compounds were acquired, being considerably less toxic. An issue of using Norbormide as a rodenticide is bait shyness; this signifies that after the rat consumes a small bit of it, the rat becomes ailing and evades the toxin at that time; likewise the savor is presumed to be awful. Currently, researcher has been seeking for prodrugs of Norbormide that delivers the toxicant slowly and thus detain the toxic impacts. Pro-drugs have been found that seem to have these properties. Following researches need to be done for improvement before usage ultimately could be possible.

The mechanism for the vasoconstrictor effect is expected to be arbitrated by the modulation of calcium influx. This influx of calcium can leads to contraction in the myocytes. Perhaps the influx of calcium is interceded by the phospholipase C (PLC)-coupled receptors, in rat peripheral artery myocytes. Further all study has revealed that in respiratory, urinary and gastrointestinal smooth muscle there was not any contraction by Norbormide. The signs of Norbormide were very alike to the improved known Ca2+ entry blocker agents. Consequently, norbormide is not solely species specific but as well as tissue specific. Norbormide has a strong influence on the mitochondria in the cell. So, Norbormide transmit through the outer mitochondrial membrane (OMM) to the inner mitochondrial space. At this location or at the matrix it persuades the permeability transition pore (PTP). This PTP is an inner mitochondrial membrane (IMM) channel, whose opening leads to an increasing permeability for ions with an exclusion size of about 1500 Da.The convey of Norborimide derives from a Translocation protein (TSPO) also identified as peripheral benzodiazepine receptor. The Translocation protein (TSPO) is selective for the norbormide transport in rats. There are a few discrepancies in amino acids, but the position of 113 is very similar in between the species and other species like dogs, humans and chickens. Where the rat have at position 113 a methionine (M) others species have a leucine amino acid, this outcome, possibly for the diverse magnitude of transport among rat and other species. 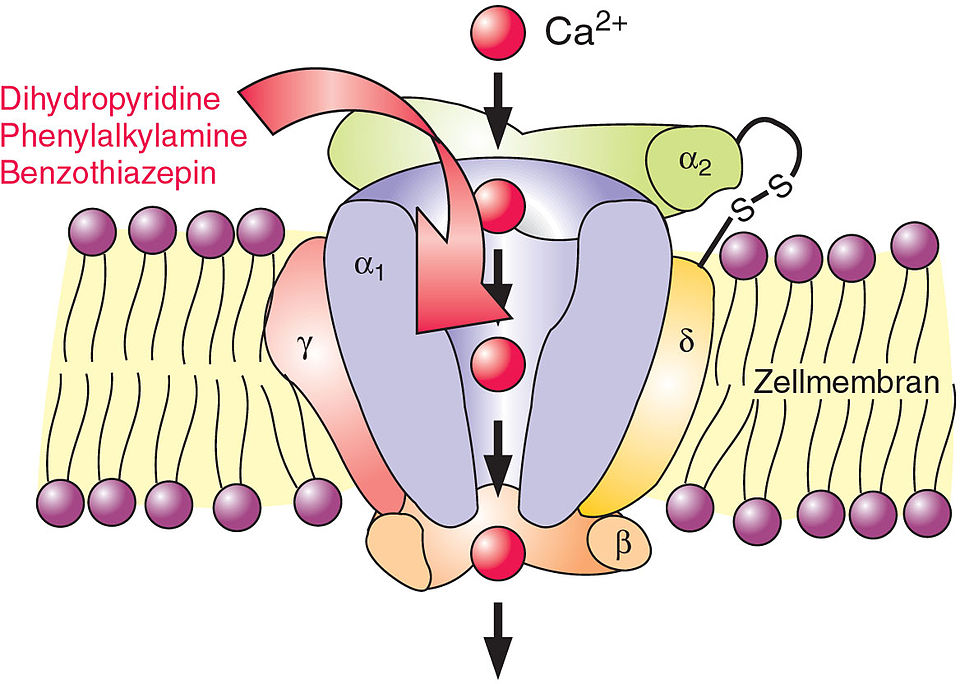 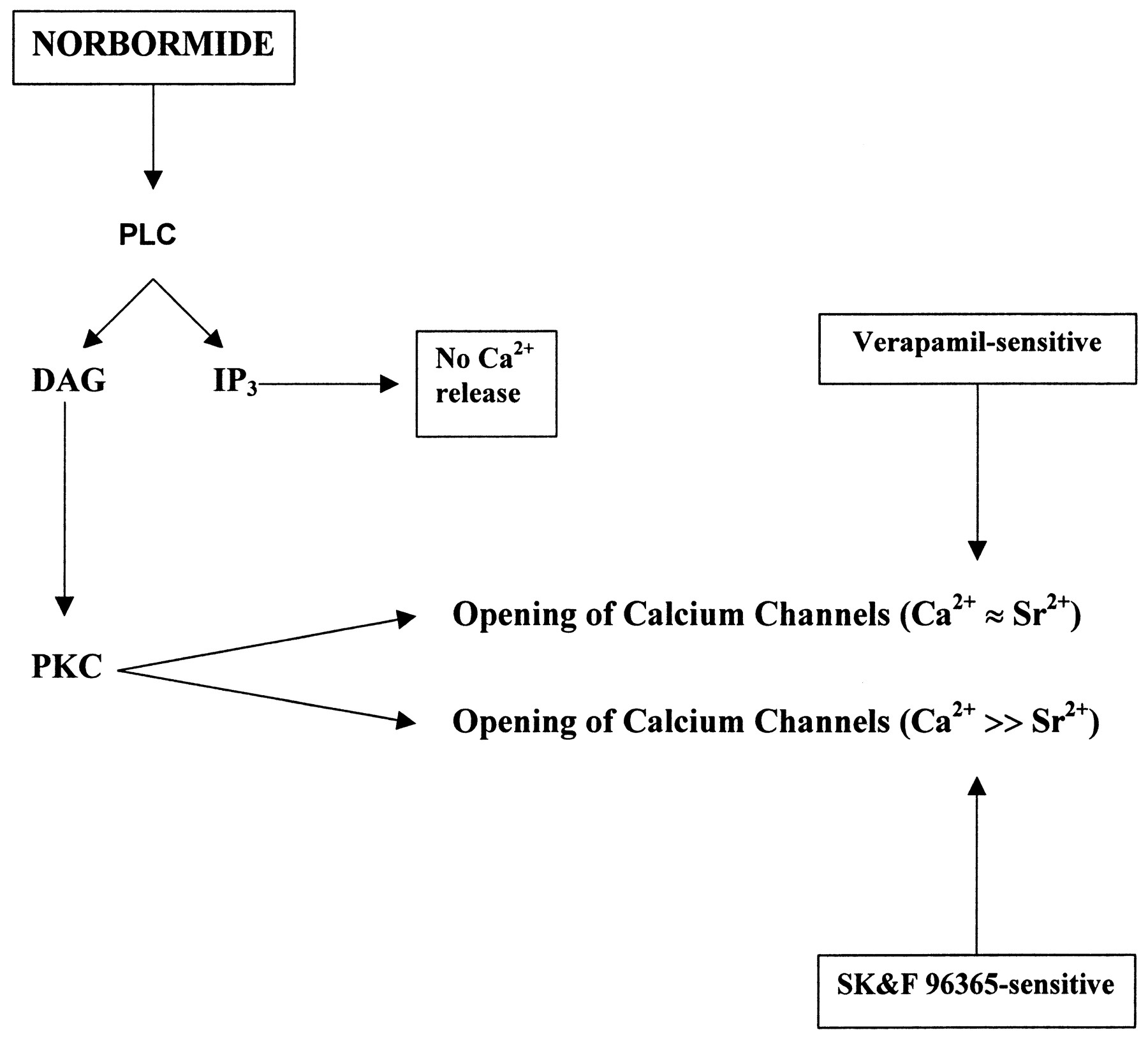 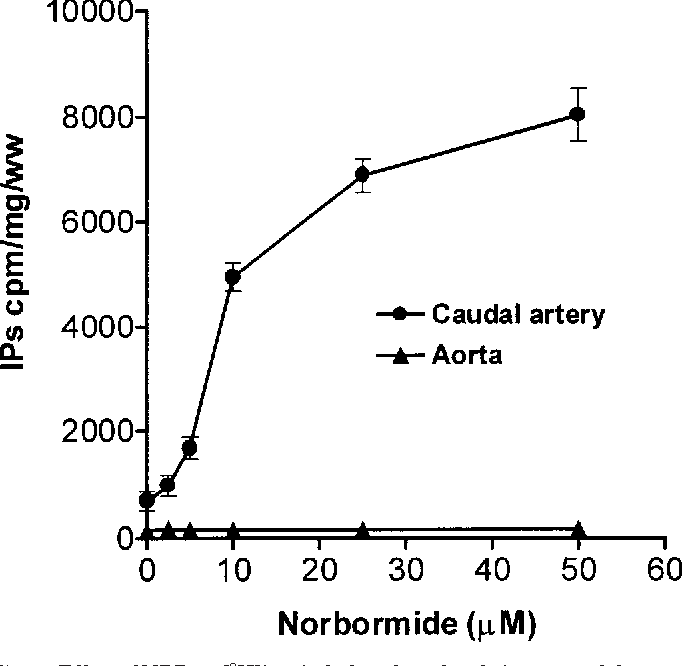