This article compare, for selected crops, state payment indicators for ARC-CO and PLC based on the January 12, 2015 WASDE (World Agricultural Supply and Demand Estimates) mid-price estimate and NASS’s (National Agricultural Statistical Service) crop production annual report.  Crops compared are barley, corn, oats, peanuts, long grain rice, medium (and short) grain rice, sorghum, soybeans, and wheat. The term, payment indicator, is used because the calculations use state yield instead of county yield for ARC-CO and farm payment yield for PLC.  They are not payment estimates for individual FSA farms.  Nevertheless, they help frame perspectives and questions regarding crop program choices.  Other discussions of indicated 2014 crop year payments are contained in the farmdocdaily articles of August 13, September 18, October 14, December 18, 2014, and January 22, 2015.

Share of States with Payments, 2014 Crop Year:  Because PLC is a U.S. price payment program, in a given year all states either receive a payment or do not receive a payment (see Figure 1).  Level of payment differs only by farm program yields.  In contrast, it is common for ARC-CO to make payments for some but not all states, such as is currently indicated for these program crops for the 2014 crop year.  The reason is that, as a revenue program, yield helps determine if payments occur.   It is unusual for all states in the U.S. to uniformly experience good or bad yields, where good and bad is defined relative to the state’s yield benchmark for the most recent 5 years.  Hence, ARC-CO will likely make a payment for some but not all states unless U.S. crop year price is far above or far below the price benchmark for the most recent 5 years.  In short, PLC and ARC-CO have different, often notably different, payout structures.

►  ARC-CO and PLC have different payment structures.  All areas either receive or do not receive a PLC payment because payments are based on U.S. average price being less than a U.S. reference price.  ARC-CO payments vary more widely by area.  As a revenue program, ARC-CO payments depend on yield as well as price variation.  Yield rarely is uniform across the U.S.  Some areas have higher than normal yields; other areas have lower than normal yields.

►  Also illustrating the important role of yield, despite ARC-CO’s high indicated average payment per acre for corn, PLC currently is indicated to make higher payments than ARC-CO for some states.

►  Corn is the key to program cost for the 2014 crop year.  It will have the highest base acres, and for many areas, indicated ARC-CO payment per acre is close to its maximum.  However, it is not clear how many farms will elect ARC-CO for corn.

►  During debate on the 2104 farm bill, Congress selected PLC reference prices for long grain rice and peanuts that were closer to market prices over the 2008-2012 period than for other crops.  A commonly cited reason for this decision for long grain rice was to use PLC to provide payments that would replace the roughly $95/acre direct payment rice gave up.  At least for 2014, Congress appears to have accomplished this objective as indicated payments by PLC is $90/acre.  It is less clear what the policy drivers were in regard to peanuts, but, in the context of only the 2014 crop year, present indications are that peanuts is likely to be the biggest beneficiary of the 2014 farm bill replacing the 2008 farm bill.  It gave up roughly $45/acre in direct payments and, at least for 2014, has indicated payments of $128/acre in PLC payments.  Again, within the narrow confines of the 2014 crop year, corn is the second most favored crop.  It gave up average direct payments of roughly $25/acre vs. current indications of average state ARC-CO payments of $40/acre, although not every area has more indicated ARC-CO payments than direct payments.    The other crops currently have lower indicated average ARC-CO and PLC payments than the direct payments they gave up.  Note, these conclusions may change over the life of the 2014 farm bill. 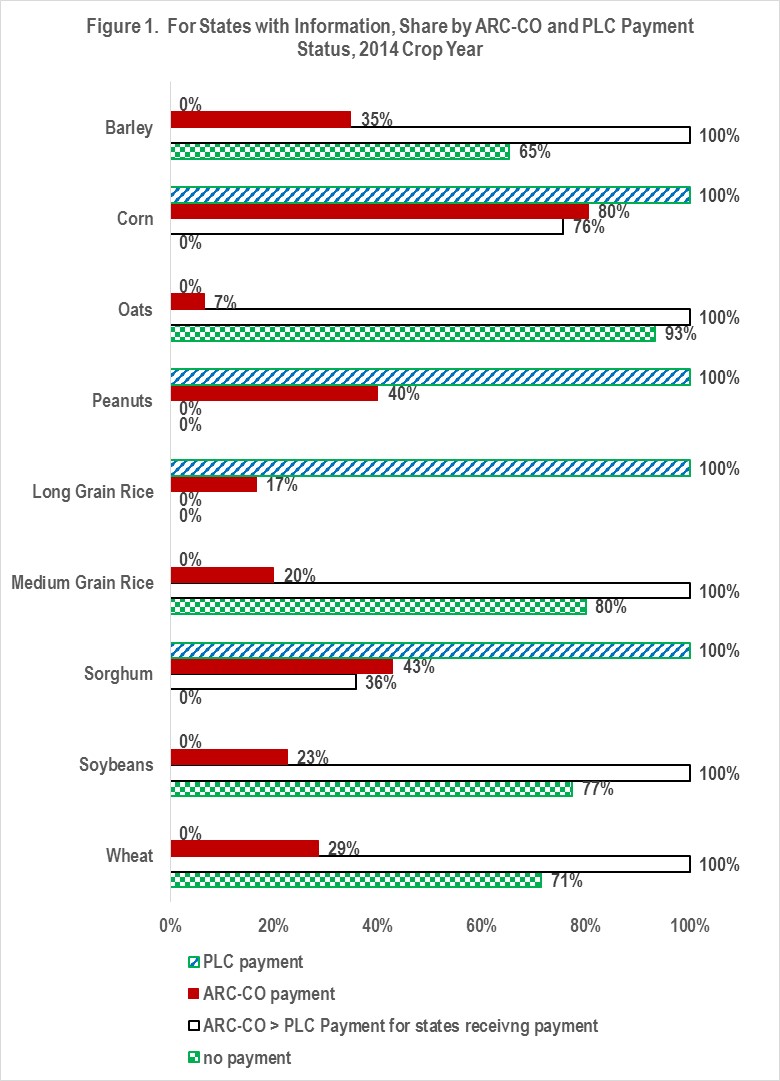 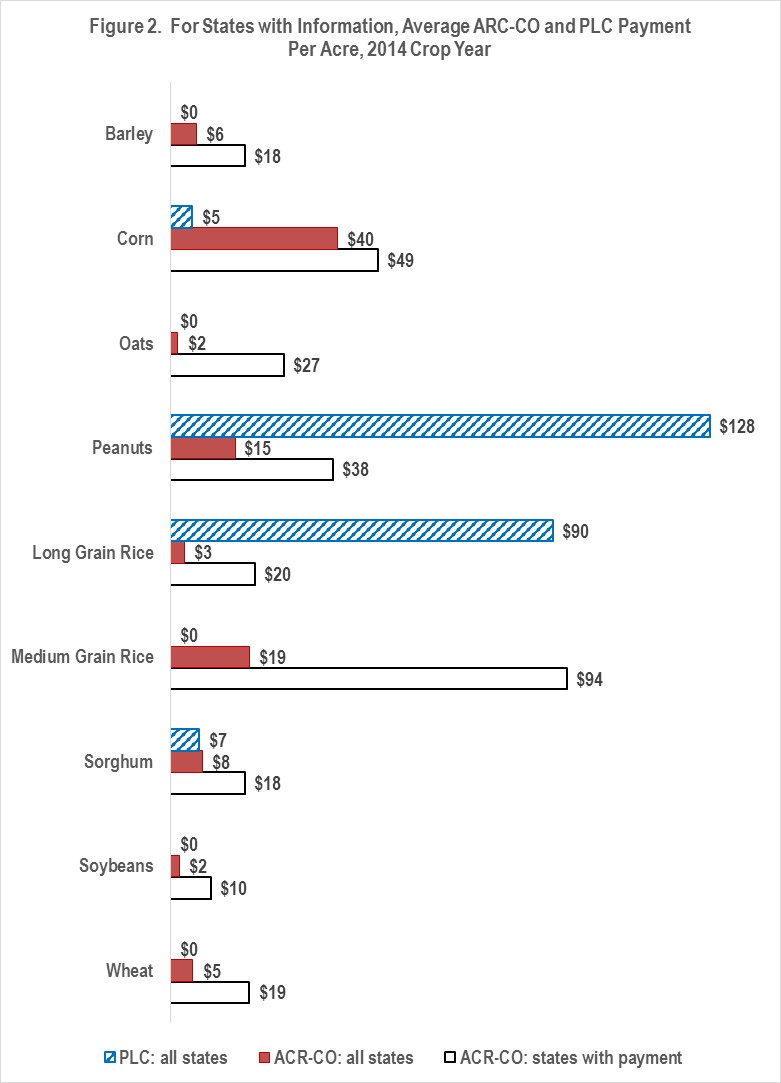