Multiple Sclerosis (MS) is a chronic inflammatory demyelinating disease of the central nervous system (CNS) with an autoimmune role its pathogenesis. It involves degeneration of the myelin sheath, scarring and/or plaque formation and the eventual loss of axons in both the white and gray matter (McCance & Huether, 2014). The etiology of MS is still unknown, however it is thought that MS is may be brought on by an infection that occurs in an individual who is genetically susceptible. Many environmental factors are also believed to play a role in the development of the disease (McCance & Huether, 2014). In MS, the immune system triggers a T and B cell response to myelin self-antigens, which starts the beginning of the early inflammatory demyelination process. The autoimmune response triggers peripheral activation of CD4+ T-cells and CD8+ T-cells, which cross the blood brain barrier (McCance & Huether, 2014).  Once in the brain parenchyma CD4+ T-cells attach to antigens on myelin basic protein which is presented by antigen-presenting cells. This causes the CD4+ T-cells to activate production of IL-12 and IL-23 which play a minor role in the inflammatory destruction of myelin by causing persistent activation of microglia and macrophages. It also causes the activation of IL-17 from T-helper 1, which is a more potent pro-inflammatory cytokine that is highly expressed, particularly during relapse of the disease (Garg & Smith, 2015).

Once the inflammatory complement cascade is activated, it causes additional release of cytokines and chemokines, recruitment of inflammatory cells including T cells, monocytes, and B cells. The B cells are thought to work by producing autoantibodies, which further activate T cells. The CD8+ T-cells are believed to drive direct axonal injury to MHC I/antigen expressing cells such as neurons and oligodendrocytes (McCance & Huether, 2014).

The loss of myelin causes a loss of nerve conductivity and eventual death of neurons. This death of neurons leads to a loss of brain volume and disruption of sodium, calcium and potassium ion channels, which further interfere with neuronal conductivity (McCance & Huether, 2014). This demyelination and axonal loss leads to the development of MS lesions or plaques mainly in the white matter, but this can also occur in the gray matter. In these lesions, there is a shift from CD4+ T-cells to CD8+ T-cells, thus reinforcing the belief that direct axonal injury is caused by CD8+ T-cells (Garg & Smith, 2015). More diffuse “shadow lesions” can occur throughout the CNS causing abnormal Wallerian degeneration, specifically in the white matter (Garg & Smith, 2015). 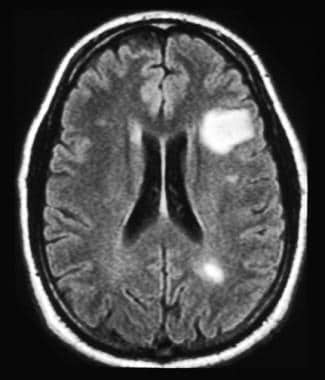 In order to confirm diagnosis of MS, the provider must first rule out other neurodegenerative diseases. MRI imaging and spinal fluid analysis are used in the confirmation of disease (Garg & Smith, 2015). To correctly diagnose the disease there must be evidence of neuronal damage in at least two areas of the CNS, and this damage must have occurred at least one month apart (Garg & Smith, 2015).

MS takes an unpredictable course that interrupts the sending of information within the brain and to the body. The most common symptoms of MS are fatigue, numbness/tingling, cognitive changes, bladder/bowel problems, walking (gait) difficulties, vision problems, spasticity (stiffness and muscle spasms), and dizziness (McCance & Huether, 2014). These common symptoms are usually accompanied by secondary and tertiary symptoms, which are progressively more severe. The onset of symptoms typically occurs between 20 and 40 years of age. MS is more common in women, having a 2:1 female to male ratio (McCance & Huether, 2014). There are three main clinical manifestations of MS, each with unique initial presenting symptoms: