Here are some of our ideas. The ones we circled are the 5 ideas we chose to move forward with for our presentation. We each came up with three ideas during our individual brainstorming section. We tried to come up with one solution from each problem area. 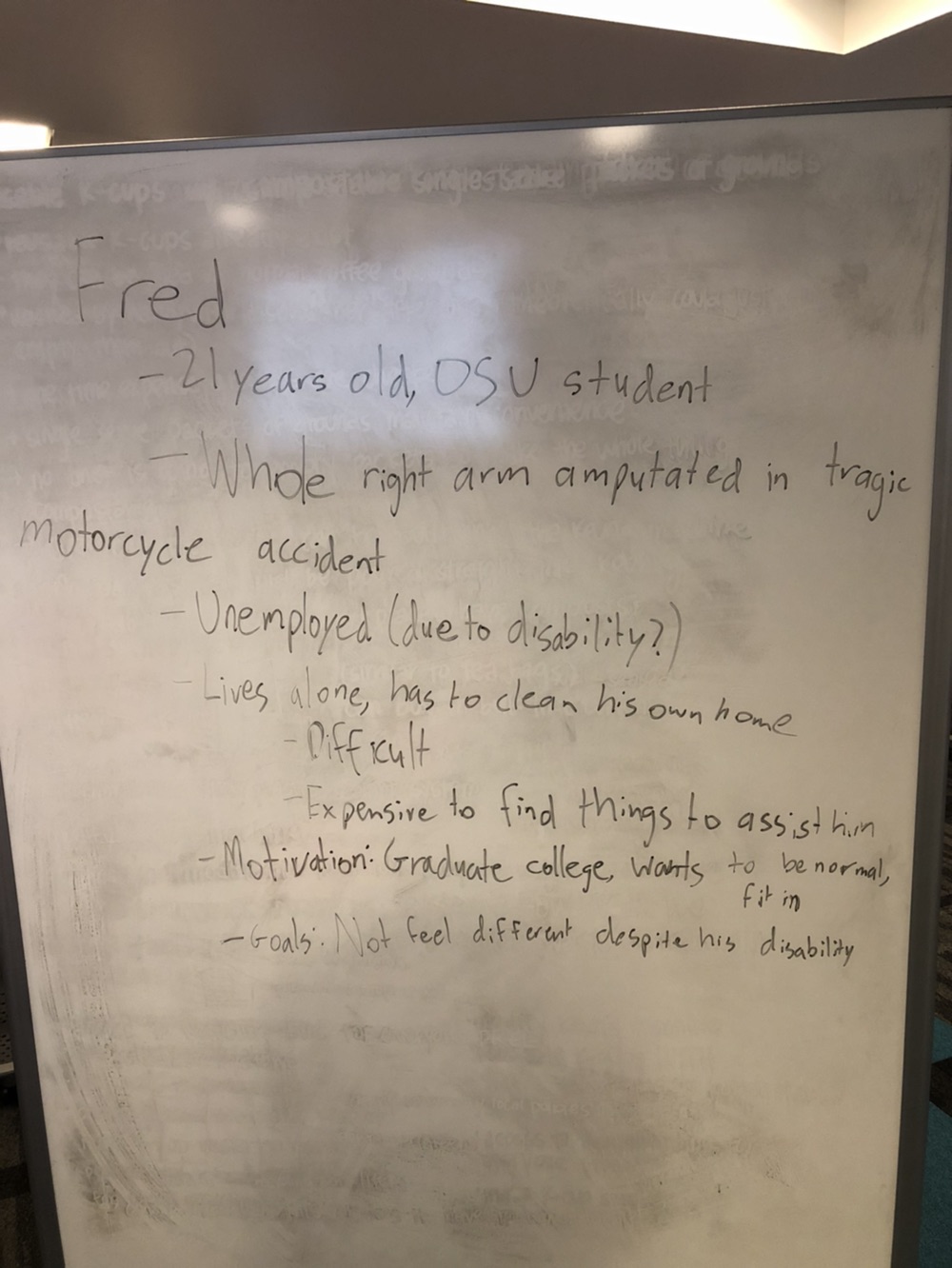 Step 2: Create a Mindmap of problems 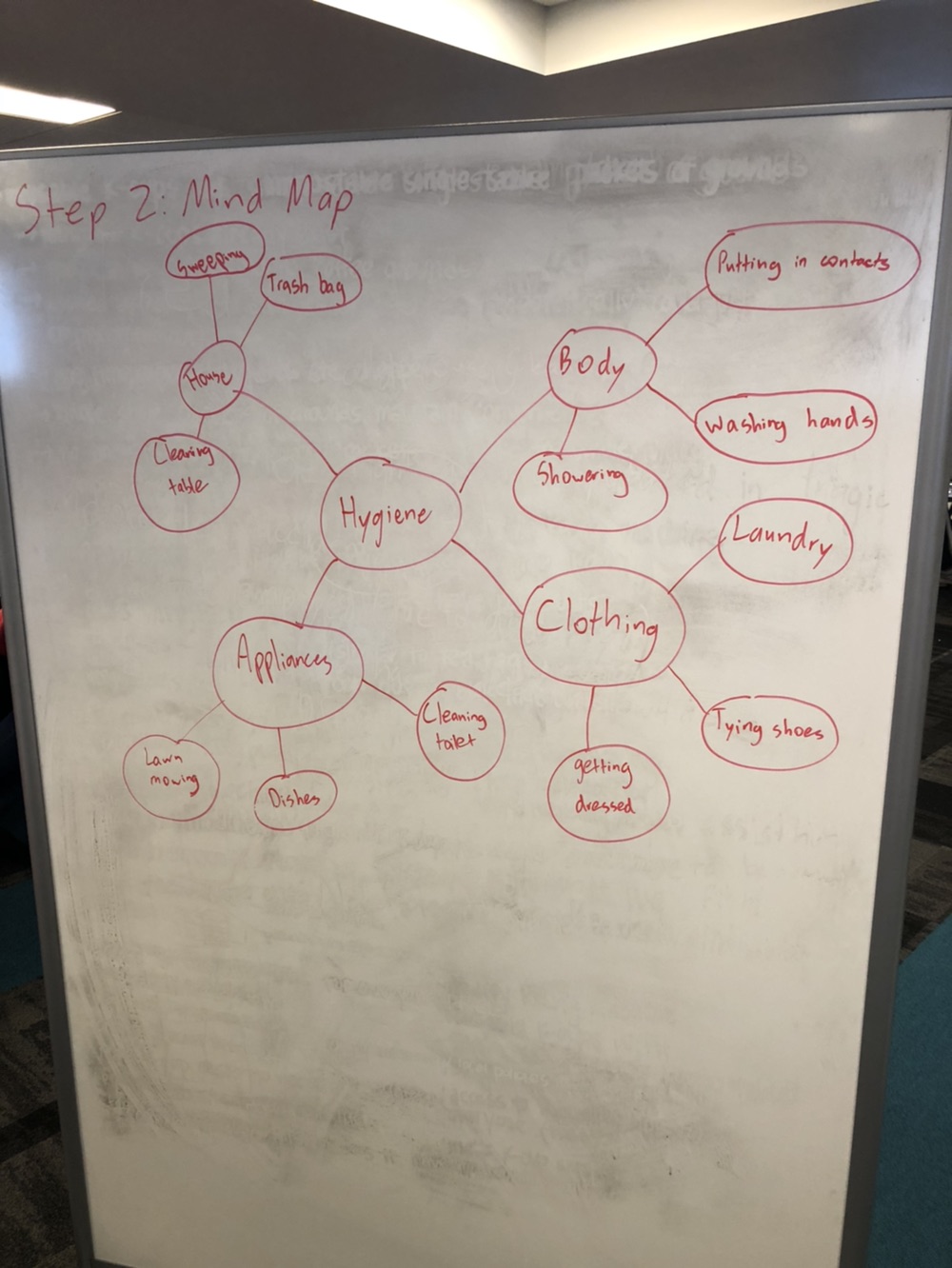 At times, it was difficult to empathize with someone that has just one arm since we all have two, but that is some of the challenges most designers face when coming up with ideas on how to improve the lives of others. As a team, we have decided to focus more on the hygiene aspect and how it may be difficult to clean certain areas with one arm. Our four areas within hygiene are the house, body, clothing, and appliances. Each has something to do with how we live and carry out our day-to-day lives. A lot of the time, taking care of these four areas is done without thinking. We shower every day, do laundry, clean the house and its appliances frequently.

However, it is considerably more challenging for individuals with just one arm. Think about it, of those four problem areas, how often are you using both hands to clean? It’s likely that all four of these tasks require the use of both hands quite frequently, some tasks may even be impossible with just one arm. As we move forward, we hope to learn more about what one-armed people can do well, and how they go about accomplishing tasks that would normally require two hands.

Getting feedback from the rest of the class was very helpful as well. At first, we had two main ideas that we wanted to focus on: hygiene and video games. After receiving this feedback, it was clear that we needed to focus on just one topic. We ended up going with hygiene because we thought it would be more relatable to the average person, and we would have more to talk about (the four problem areas mentioned above). Overall, this is has been a good experience learning about the challenges that one-armed people have to deal with on a daily basis and what we can do to help make their lives a little easier. This picture shows how I folded a t-shirt with one hand. As you can see, it is not folded well as it has wrinkles and creases and is uneven in general. This time I folded the shirt with both hands and it looks much better. In this picture, I attempted to sweep the floor of my kitchen. As you can see, I tried to be a little creative and use my foot to hold the dustpan in place, but it was not ideal and I spilled dust and crumbs everywhere. 🙁 In these pictures, I took two typing tests to understand how losing a hand would impact my typing speed. My initial two-handed speed was 87 words a minute, where with only one hand my speed was cut by more than half to only 27 words a minute. One of our tasks was one-handed gaming. For this task, I used a controller and attempted a claw grip style, something that physically impaired gamers often use. The change was so drastic that it was virtually impossible for me to play like I would with both hands. In this photo, I tried putting in contact lenses. The hardest part about doing it with one hand was opening the container and getting the contact out. Actually putting it in my eye with only one hand was relatively easy. I found it extremely difficult to wash my hands with only one. The only easy part was using the faucet- applying soap and lathering all with one hand was really tough and took quite a bit of time. I do not think I did a good job. I also found it tough to get a new trash bag liner wrapped around the lid of the bin. I ended up having to actually get in the trash can in order to get it placed around the lid. But I’ll tell ya, nothing was more infuriating than trying to open a jar one-handed. I couldn’t even do it. In this photo, I was trying to tie my shoes with only one hand. But it is literally impossible to do that. Cutting vegetables with one hand was easier than I thought, though the vegetables were everywhere cause I couldn’t hold it. But at least it is possible. Folding toilet paper with one hand is pretty easy. To be honest, I sometime would do that if one of my hands is holding my cell phone.