This piece has some discussion of exactly why they cancelled Ibsen’s play — the government got scared, as usual:

This brings back nostalgic memories of when I helped set up August Strindberg’s Miss Julie, in Chengdu in 1987, directed by the late Zhang Fushen. I wrote about it in the Swedish daily, Svenska Dagbladet, on Jan. 14, 1987.

Also, wondering about this Inkstone. It is paid for by the Chinese state. They sometimes seem to want to balance on the line of the forbidden. Is it that they want to project a fantasy about the censorship situation, to ignorant foreigners, by way of seeming a little daring? How much of it is it available inside the firewall?

BERLIN — A German theater company is ending a tour of China early after a theater canceled two showings of Henrik Ibsen’s “An Enemy of the People.” German authorities say they regret the cancellation.

The Schaubuehne has been touring with the Ibsen play since 2012. It usually ends with a discussion with the audience, but that was allowed only at the first of three Beijing performances.

Our marketing and comms team has asked me if there exists a standardization of Xiqu terms somewhere for their baseline reference and use.

Does East West Centre at U of Hawaii, or someone at HKU or elsewhere know of such a database or listserv or other resource? A kind of Chicago Manual of Style for Xiqu terms in English that they can use as a reference point for why they choose the English terms they choose (right now it is up to the preference / conventions of the translators they engage, but we would prefer something more standardized to reference.)

This year at Fudan University in Shanghai, there will not be any students talking loudly about female genitalia. Zhihe Society 知和社, an on-campus student organization committed to addressing gender issues, was forced to cancel its annual performance of the feminist play The Vagina Monologues (阴道独白 yīndào dúbái), which was set to take place on May 31.

Written by American playwright and activist Eve Ensler in 1994, The Vagina Monologues is a celebration of women’s rights, bodies, and sexual experiences.

In 2004, students at Fudan University performed the Chinese version of The Vagina Monologues for the first time on campus, making the school the first Chinese college to produce the play. In subsequent years, the student group constantly adapted the original play for the contemporary Chinese context, and the annual production has evolved into a well-received cultural event among college students in Shanghai. END_OF_DOCUMENT_TOKEN_TO_BE_REPLACED 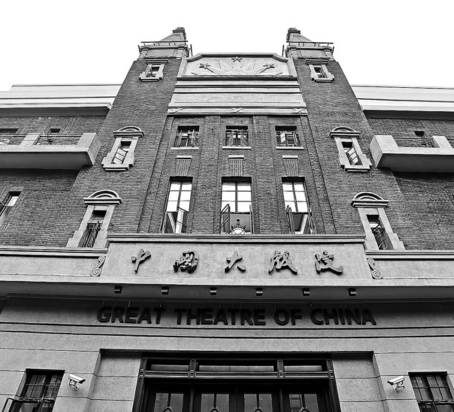 The facade of the Great Theater of China in Shanghai. Provided to China Daily

The 88-year-old Great Theater of China in Shanghai was reopened on May 16 after two years of renovations.

Located near People’s Square at 704 Niuzhuang Road in downtown Shanghai, the facility was built in 1930 as a prime venue for Peking Opera performance. Famous artists such as Mei Lanfang, Ma Lianliang and Meng Xiaodong used to sing in the theater, which was known as one of the “Top Four Stages” of Peking Opera.

The building was listed as a protected historical structure by the municipality in 2005. Huangpu district authorities later made the decision to renovate the building in 2012. The Ever Shining Cultural Group, the operator of the theater, invited RHWL Architects from Britain to work alongside a Chinese team for the renovation. END_OF_DOCUMENT_TOKEN_TO_BE_REPLACED

Source: NYT (4/24/18)
‘We Don’t Perform for People, We Perform for the Gods’
A community has formed around Chinese opera in Thailand, preserving one of the oldest dramatic art forms in the world.
By Malin Fezehai

Backstage with the Sai Yong Hong Chinese Opera troupe. Actors spend hours applying layers of makeup and working on their hairstyles before performing.

BANGKOK — “Anywhere they play in Bangkok, I’ll be there,” said Warin Nithihiranyakul, 73, a dedicated fan of the Sai Yong Hong Chinese Opera troupe for more than 10 years. While waiting for his friends to arrive, he helps out by starting to set up plastic red chairs for the audience to watch the evening’s performance in an area just south of Bangkok’s Chinatown.

A devotee of 11 years, Wandee Tengyodwanich, 62, unwraps several small plates of Chinese dough sticks and cake, passing them around to her friends in front of the stage before the show. She says that Sai Yong Hong is the best Chinese opera in Thailand because it invests in very elaborate costumes. She and her friends go to see the group a couple of times a year. They eat and catch up as they reminisce about the first time they saw Chinese opera as children. END_OF_DOCUMENT_TOKEN_TO_BE_REPLACED

A large-scale, colourful rendition of the Kyrgyz epic Manas (玛纳斯史诗) was staged March 22-23 in Beijing’s ultra-modern Poly Theater. This performance came just two days after the newly anointed President Xi Jinping, speaking at the People’s Congress, cited two of the three great oral epics of non-Han peoples, Manas and the Tibetan-language King Gesar. While he

mangled the title of the latter (Xi Jinpingian Sager), their mere mention shows their importance in the Party’s current multiethnic-is-good narrative.

This centuries-old trilogy in verse recounts the exploits of the legendary hero Manas and his son and grandson in their struggle to resist external enemies — primarily the Oirat Mongols and the Khitan —and unite the Kyrgyz people. Along with heroic tales such as Dede Korkut and the Epic of Köroğlu, Manas  is considered one of the great Turkic epic poems. END_OF_DOCUMENT_TOKEN_TO_BE_REPLACED

The AAP conference is a two-day event, to be held at the Westin Boston Waterfront in Boston, MA preceding the 2018 ATHE Annual Conference. Proposals are invited for papers, panels, workshops, roundtable discussions, and other formats. Learn more about the AAP at http://www.yavanika.org/aaponline/.

The deadline for proposals is March 31, 2018. (Proposals from foreign applicants may receive early consideration as needed for visa arrangements.) Proposals for the following formats are welcome: END_OF_DOCUMENT_TOKEN_TO_BE_REPLACED

Adaptation, and parallel adaptive acts such as translation (Jakobson 2000) and acculturation, are the foundation blocks for intercultural and cross-cultural projects (Chan 2012), but also have agency in developing national multicultural narratives (Leong 2014).  As Chan highlights, ‘adaptations serve as carriers of cultural subjects and formations’ (2014: 412).  Inevitably, acts of intercultural and cross-cultural adaptation are bound to the cultural-political sphere, to post-colonial and neo-colonial histories. Yet, they are as much a product of the personal and the national, as they are the communal and the global. Translation happens not only between texts but also within performance, articulating the commensurability or lack of understanding among actors representing contrasting world views (Lindsay 2007). END_OF_DOCUMENT_TOKEN_TO_BE_REPLACED 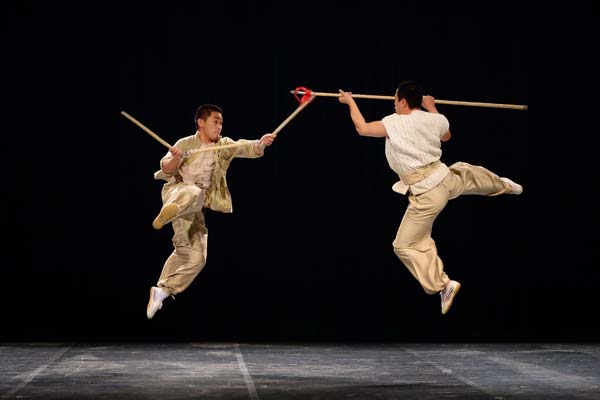 While congratulating Lin on his take on the classic, Shu talked about commemorating his father’s 110th birth anniversary. END_OF_DOCUMENT_TOKEN_TO_BE_REPLACED

Source: Sixth Tone (9/25/17)
Why Original Chinese Theater Is Much Ado About Nothing
Meddling directors, confused actors, and pushy politicians are leaving the country’s budding playwrights exasperated.
By Nina Huang China’s theater industry is experiencing a worrisome boom. Though more and more plays are being produced, and audience numbers are increasing every year, the market is flooded with foreign productions, commercial adaptations, and classic Chinese plays. Experimental theaters — known simply as “small theaters” in Mandarin — are in decline, despite their strong track record of producing original stories that reflect modern China.

According to Daolue, a research center that provides data on the Chinese cultural industry, the number of new plays last year dropped to fewer than 200, down from 375 in 2015. The box office revenue for plays in small theaters reached 164 million yuan ($25 million), a decrease of 23 percent from 2015. Audience figures also dropped by 536,000 compared to the year before. END_OF_DOCUMENT_TOKEN_TO_BE_REPLACED For close to two hundred years, the ideas of Shakespeare have inspired incredible work in the literature, fiction, theater, and cinema of China, Taiwan, and Hong Kong. From the novels of Lao She and Lin Shu to Lu Xun’s search for a Chinese “Shakespeare,” and from Feng Xiaogang’s martial arts films to labor camp memoirs, Soviet-Chinese theater, Chinese opera in Europe, and silent film, Shakespeare has been put to work in unexpected places, yielding a rich trove of transnational imagery and paradoxical citations in popular and political culture. END_OF_DOCUMENT_TOKEN_TO_BE_REPLACED

This two-day programme co-presented by the SOAS China Institute and Zuni Icosahedron marks the 20th anniversary of Hong Kong’s handover from the UK to China with a series of events focusing on intercultural exchange and city-to-city collaboration in the performing arts. Participants will reflect on Hong Kong’s cultural exchanges with London and several Asian cities over the past twenty years, as well as discuss proposals, opportunities, strategies, and challenges for the next two decades.

END_OF_DOCUMENT_TOKEN_TO_BE_REPLACED Unlike China’s film industry, which is constantly in the limelight, Chinese theatre enjoys the benefits of the shadows, so to speak. Without the tight scrutiny of the public or the censors, it has mushroomed into an art form with an almost unimaginable range of diverse works. On the other hand, most of these have failed to find even a limited audience, let alone commercial viability.