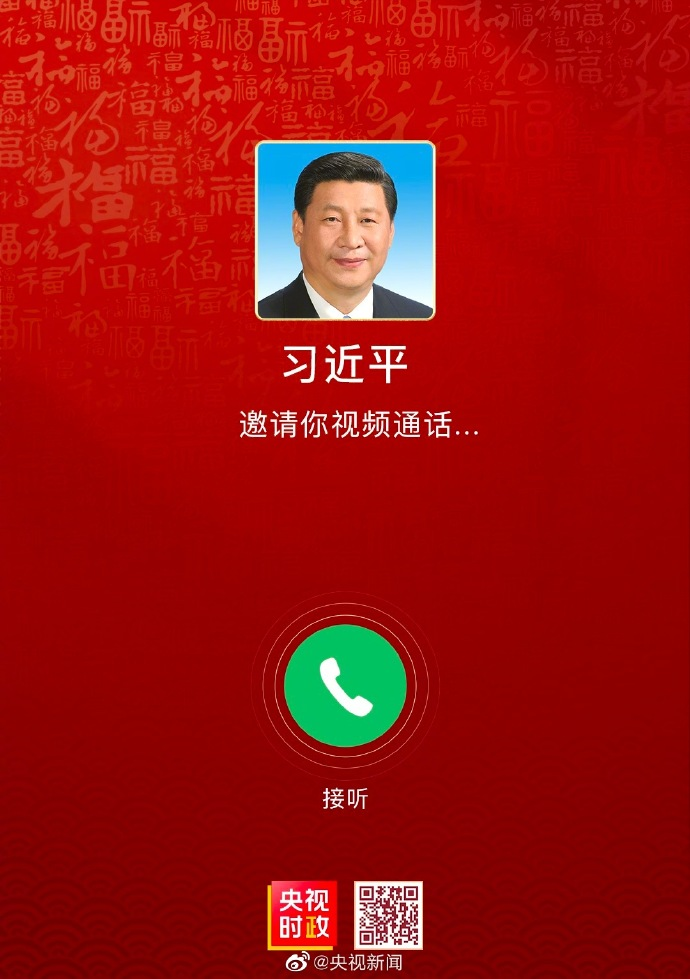 A screenshot of the video call shows a color photo of Xi Jinping against a red background, a green “incoming phone call” icon, and the Chinese message: “Xi Jinping Invites You To A Video Call.”

A novel propaganda method—a “video call” from Xi Jinping delivering Lunar New Year’s well-wishes—inspired titters after China Central Television (CCTV) shared it on Weibo. The Weibo link sent users to a faux WeChat incoming call page notably lacking a “reject call” button. Clicking “answer” pulled up a short video of Xi’s recent livestream address to grassroots cadres, spliced with shots of rapt audiences around the country applauding his speech. Less a phone call than a directive from on high, the video was met with mockery online, forcing CCTV’s Weibo page to lock and censor the comment section. CDT captured and translated a selection of comments before they were erased:

ihc3sqw：Straight out of “Ring” [A Japanese horror film in which mysterious phone calls play an important role.]

whyworld：Just watched the video. What stylish packaging. They didn’t even pretend to have someone on the line with him. The point being that our only role is to listen.

华国锋 [The username is “Hua Guofeng,” Mao’s oft-forgotten successor who proclaimed a “Two Whatevers” policy, following whatever Mao did and whatever Mao said.]：Xi Jinping must seize control over the economy. We all believe in your ability—whatever you control will surely go up in smoke.

啪啪啪WN：Hello, Piggy. If Tencent could be bothered to reintroduce the “end call” button, that would be nice. I do not wish to speak with you, thanks. Scram.

YiiPerona：Who the fuck started this “Xi Jinping invites you to a video call” thing? My first belly laugh of 2023. [Chinese] The video came from Xi’s recent “virtual visits” with grassroots officials and everyday citizens from Heilongjiang, Fujian, Xinjiang, Henan, Beijing, and Sichuan. In typical years, Xi conducts in-person visits in the days before the Lunar New Year. He has yet to do so this year, and if he does not, it may be an indication of concern over the extent of China’s COVID outbreak, the true death toll of which remains unclear. Xi famously did not visit Wuhan during the early days of the 2020 COVID outbreak, instead opting to videoconference with medical workers while Premier Li Keqiang and Vice Premier Sun Chunlan visited hospitals in the city.