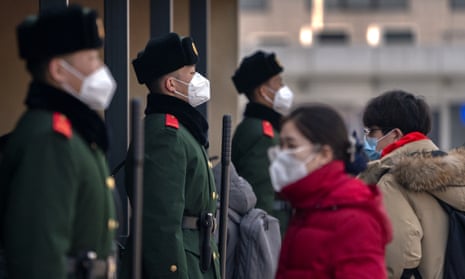 Police wear face masks outside the entrance to the Beijing Railway Station. Chinese authorities have announced an online crack down on Covid “rumours” across lunar new year Photograph: Mark Schiefelbein/AP

Chinese cyber authorities have announced an internet censorship crackdown to ensure there are no “gloomy sentiments” caused by pandemic “rumours” during the lunar new year festival.

It comes as health forecasting firm Airfinity estimated more than 600,000 people have likely died since zero-Covid restrictions were lifted in December – 10 times more than Chinese authorities have officially declared.

The month-long “Spring Festival online improvement” program will target those spreading what authorities deem to be “rumours” about the spread of Covid and patient experiences.

It specifically cited the investigation and punishment of “online rumours related to the epidemic” and “fabricating patient experiences”, as well as producing or sharing fake virus treatments. The announcement said the work would “prevent misleading the public and causing social panic”.

Online, social media has been awash with personal stories of people contracting Covid, struggling to source medication or healthcare, and losing elderly relatives to the disease. The personal experiences of many jarred with the official narrative that the outbreak was under control and the response “science led”, prompting unusual levels of online criticism against the government.

On Saturday health officials announced an updated death toll of almost 60,000 people. The figure included only those who had died in hospital. Previously, the government had only reported about 5,000 Covid deaths since the pandemic began, including just a few dozen since the zero Covid policy was abandoned in early December. It was at odds with widespread reports of fatalities, with some major cities reporting infection rates of up to 90% of their populations.

The ruling Communist party government is hypersensitive to foreign criticism of its Covid response and accusations that it is not being transparent with data. Early warnings about the outbreak by Chinese doctor Li Wenliang were initially dismissed and punished as rumour. More recent reporting on the mass outbreak following the lifting of restrictions was branded a “China-bashing carnival” in state media.

Health officials have claimed the current wave of infections has peaked, but it followed warnings of further infections spread across lunar new year as hundreds of millions of people travel across the country. People were urged not to visit elderly relatives unless necessary.

On Thursday, independent forecaster Airfinity said their new modelling had raised estimates of case numbers and fatalities in China. It said the number of deaths since December was now estimated at 608,000, up from the previous estimate of 437,000.

The organisation also changed its forecast of two successive infection waves to one, which was “larger and more severe”, bringing as many as 62m new cases over the 14-day holiday period.

“Deaths are forecast to peak at 36,000 a day on the 26th of January during the Lunar New Year Festival. This is up from our previous estimate of deaths peaking at 25,000 a day,” it said.

“The implication of one larger wave as opposed to two smaller ones is increased pressure on hospitals and crematoriums and therefore also potentially a higher case fatality ratio.”

China’s censors have appeared to struggle to control critical social media commentary in the wake of the zero Covid policy reversal. The new program shows a renewed effort to stamp out dissent, and ensure China’s online environment reflects the Party’s image and ideals.

“After all this, they will say you have to be happy, it will be politically incorrect if you are not happy,” said one Chinese Twitter user in response.

“It seems that the best way to solve the problem is to ‘cover your mouth’.” said another. “I can’t say anything but praise.”

The administration said it would also “investigate and deal with the deliberate displaying of images of overeating and drinking during the Spring Festival, and promoting extravagant and wasteful information.”