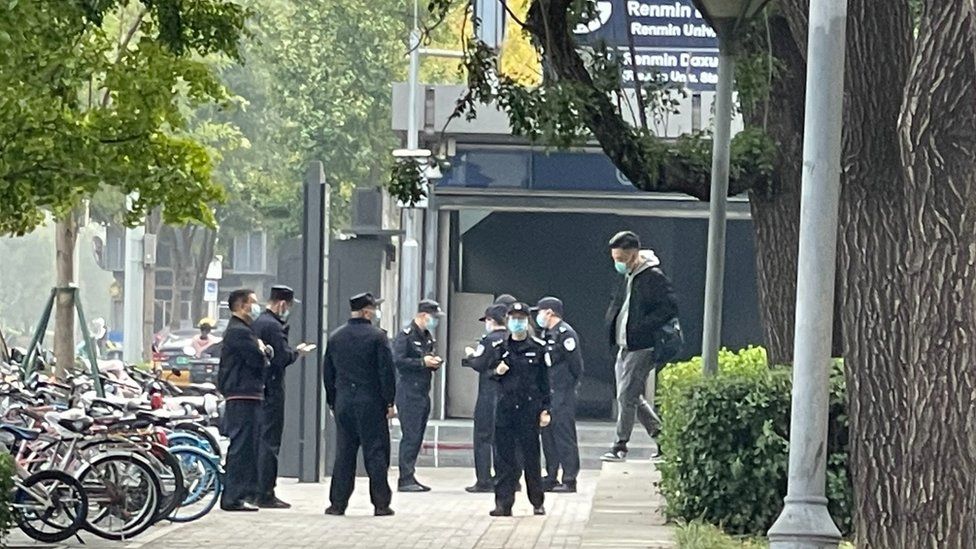 There was a visible police presence near where the protest happened

Images showed two protest banners on a bridge in the north-west of the city. The protest appeared to have been swiftly stopped by the authorities.

Frustration has been mounting in the capital before the congress. There has been an outpouring of anger online at strict security measures and the Covid restrictions put in place.

Authorities have tightened access to the city, shutting out many travellers, returning residents and deliveries. Others had their movement restricted or were forced to quarantine.

The images and footage of the protest that have been circulating showed two large banners unfurled on a bridge in Beijing’s Haidian district.

One read: “No Covid test, we want to eat. No restrictions, we want freedom. No lies, we want dignity. No Cultural Revolution, we want reform. No leaders, we want votes. By not being slaves, we can be citizens.”

The other called on residents to “go on strike at school and work, remove dictator and national traitor Xi Jinping”.

Video from the scene showed unexplained thick plumes of smoke on the bridge and a man could be heard chanting slogans into a loudhailer.

A BBC team visit to the scene later found no trace of it, but there was a visible police presence in the area.

The week-long 20th Party Congress, due to kick off on Sunday, will see about 2,300 top officials and party delegates descend upon the capital.

China’s leader Xi Jinping is expected to be handed a third term, breaking decades-long tradition and shoring up his already firm grip on power.

The capital usually sees strict security measures in the lead-up to important events. Street-level security has been strengthened with paramilitary police patrolling subway stations and neighbourhoods near the Great Hall of the People where the congress will take place. 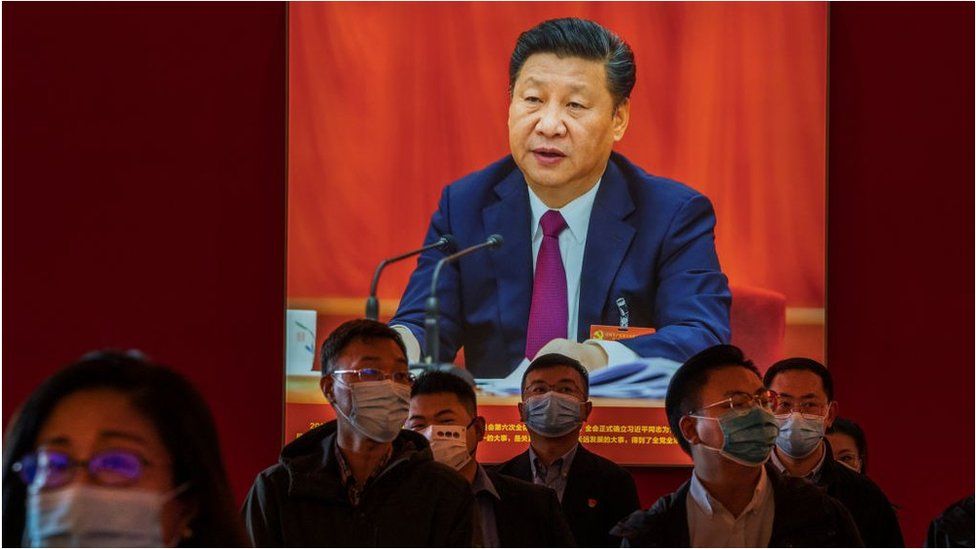 IMAGE SOURCE,GETTY IMAGES Exhibitions highlighting China’s achievements under Xi Jinping have been set up around the country ahead of the congress

Authorities are cracking down on the use of virtual private networks circumventing China’s firewalls, to restrict access to the internet beyond Communist Party control.

But in an attempt to stamp out small Covid outbreaks in Beijing as the congress nears, city authorities are enforcing much stricter measures than most other parts of China.

Tens of millions of residents are being tested every three days, with screenings for entry to all buildings enforced and mask-wearing mandates policed.

Officials have also heavily restricted the number of people entering the city and discouraged residents from leaving.

Many people who travelled to other cities during a recent National Day holiday found that their online health codes – essential for travel around the country – suddenly indicated they were at risk of Covid infection, preventing them from getting on trains or flights back to Beijing.

Others who managed to return to Beijing saw a similar change in their health codes days after returning, according to online accounts, forcing them to quarantine at home.

“I don’t understand why Beijing did this… I can’t go to work. I’m about to lose my job. I’m so frustrated. When is it going to end?” said one commenter on Weibo, while another added: “We suffer all these just because someone has to hold a meeting.”

“Why torment the ordinary people? The authorities have implemented their policy unreasonably. Their credibility is down the drain. How could people trust them?” asked another.

It comes amid a growing fatigue among ordinary Chinese with the “zero Covid” strategy that has seen harsh lockdowns and quarantine measures, long after other countries have eased restrictions.

Several recent incidents, including a bus crash that killed 27 people who were being transported to quarantine camps, have sparked public anger.

The frustration is at odds with the celebratory mood for the 20th Party Congress on display on state media and institutions.

Red banners marking the congress have popped up around the capital and popular mobile apps have changed their display colours to red. A drama recapping the highlights of the last 10 years of Mr Xi’s rule has begun airing on primetime television, while similarly themed exhibitions are being held around the country.

State media outlets have rolled out material in support of official policies including “zero Covid”, urging Chinese people to “strengthen confidence in and have patience with the current epidemic prevention and control policies”.