Source: NYT (8/5/22)
Fight or Surrender: Taiwan’s Generational Divide on China’s Threats
In areas close to the military drills, younger Taiwanese worried about the future, while older residents looked back to a harsher past to find hope.
By Amy Chang Chien, John Liu and Paul Mozur 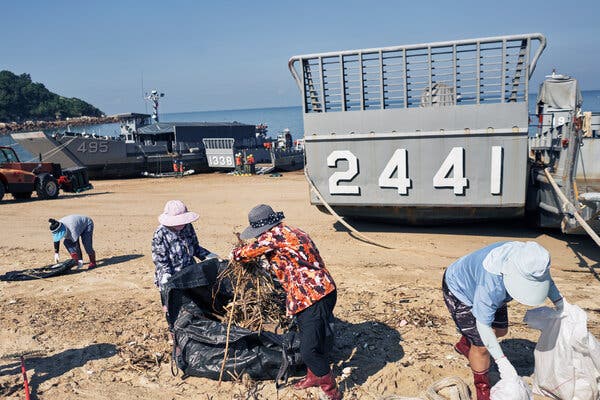 Volunteers cleaned up a beach on the Matsu Islands on Thursday as Taiwanese troops loaded artillery shells onto a boat. Life there has proceeded mostly as normal during China’s recent military drills. Credit…An Rong Xu for The New York Times

KINMEN COUNTY, Taiwan — The San Jiao Fort cafe on Kinmen Island may well be the best place in Taiwan to watch for the threat of invasion by China. Boasting a direct view of the Chinese city of Xiamen just six miles away, it is built atop an old military bunker, festooned with camouflage netting, and serves hot and cold beverages.

With Chinese warships now lingering off Taiwan’s coast and missiles falling into its seas, the divided loyalties of the cafe’s two proprietors say much about a generational shift in Taiwan that has transformed the island democracy’s relationship with China.

If China tried to take Taiwan by force, Chiang Chung-chieh, 32, would fight, even if the chances of winning are slim. Ting I-hsiu, 52, said he “would surrender.”

With a culture forged by eras of Indigenous people, hundreds of years of Chinese immigration, Japanese colonial occupation and a harsh period of martial law, Taiwan is not monolithic. During its three decades as a democracy, conflicting allegiances have dominated its politics, with debates over whether to accommodate or oppose China’s claims to the island breaking down along the lines of age, identity and geography.

In recent years, under growing bellicosity from China, the middle ground has shifted. Now, more and more, Taiwanese identify themselves as separate from China. For them, China represents an existential threat to a pluralistic and democratic way of life. They don’t consider Taiwan part of a long-divided family, as Mr. Ting and many older, China-friendly people describe the relationship. 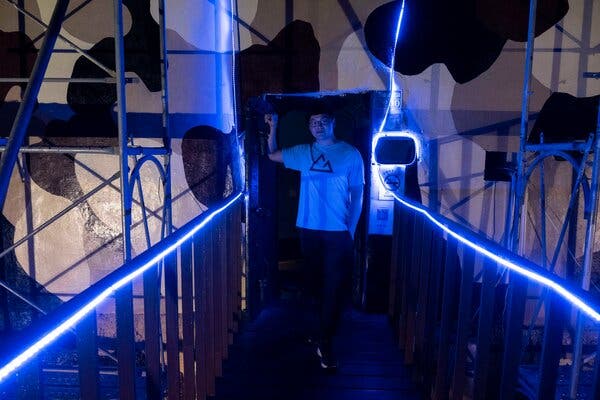 Chiang Chung-chieh, the co-owner of San Jiao Fort cafe on Kinmen Island, Taiwan, said he would fight if China tried to take Taiwan by force. Credit…Lam Yik Fei for The New York Times

Even on Taiwan’s closest islands to China, which have historically been more favorably inclined to its neighbor, Mr. Ting is a dying breed. Contradictorily the older generation, who more keenly remember China’s attacks decades ago, are the most friendly to the nation. Beneficiaries of Chinese economic liberalization and recipients of education that emphasized Chinese ties, they recall the years when China opened to the world and made many rich, before Xi Jinping became the top leader. For younger Taiwanese, their vision of China is the one Mr. Xi has wrought, an illiberal land bent on denying their ability to choose their own leaders.

Although Mr. Chiang has had similar experiences to Mr. Ting — both have spent time in China and lived much of their lives in Kinmen — he prizes Taiwan’s openness and feels threatened by Beijing. “I cherish Taiwan’s freedom and democracy and don’t want to be unified by others,” he said.

The outlook, hardened by decades of democratic rule as well as relentless efforts by China to isolate Taiwan and, more recently, dismantle Hong Kong’s democratic institutions, has informed the understated response from many to the Chinese military drills in response to Speaker Nancy Pelosi’s visit. It’s what many have come to expect out of China.

Even at the San Jiao Fort cafe, itself built upon a piece of historical detritus from a not so-distant past of direct military confrontation, there has been indifference to the new threats. In contrast to the tanks that rust on the beach below, discarded hardware reminiscent of the days when the two sides traded artillery fire, the drills have played out far away in the skies and seas.

On Friday, China sent fighter jets, bombers and more than 10 destroyers and escort ships to areas around Taiwan, with some crossing the median line of the Taiwan Strait, which separates the Chinese mainland from the island. China’s provocative launch of at least 11 missiles on the first day of the exercises, one of which crossed above Taiwan, have been invisible to most. 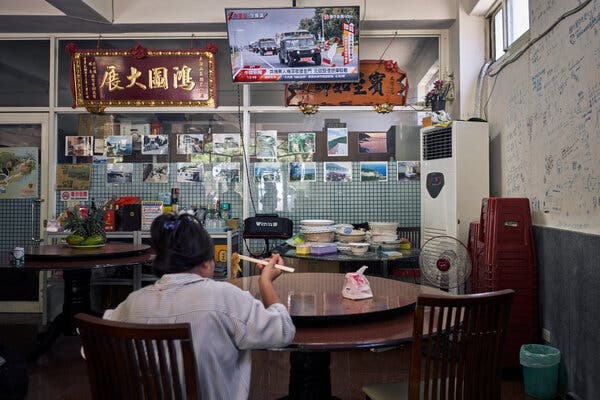 Watching the news on Thursday at a restaurant on the Matsu Islands. The archipelago, close to mainland China, is only 25 miles from one of the areas where Beijing is holding military drills. Credit…An Rong Xu for The New York Times

Up the coast on Taiwan’s Matsu Islands, an archipelago near mainland China, life proceeded mostly as normal, despite being only 25 miles away from one of the staging grounds for the drills. Alongside Taiwanese troops loading artillery shells into a transport boat, a volunteer beach cleanup continued. Many said things had been worse before.

Hardened by decades of military deadlock, older residents shrugged off the tensions. During a U.S.-China standoff in 1995 and 1996, before Taiwan’s first direct presidential election, they recalled how people fled from smaller islands and rushed to banks to cash out life savings during Chinese military actions.

“People were running for their lives,” said Pao Yu-ling, 62.

Ms. Pao is convinced that, much like last time, nothing much will come of it. It is a rare point of agreement with her 35-year-old daughter, Chang I-chieh.

She has little memory of past military drills during the Third Taiwan Strait Crisis, as the standoff back then has come to be called. Instead, she said Chinese sand dredgers, which have recently swarmed seas near the islands, were a more palpable sign of China’s aggression.

Now she views China’s authoritarianism with a critical eye. While her mother believes economic growth should come first and admires the new buildings that have gone up on Chinese islands nearby, Ms. Chang said freedom and democracy are paramount. 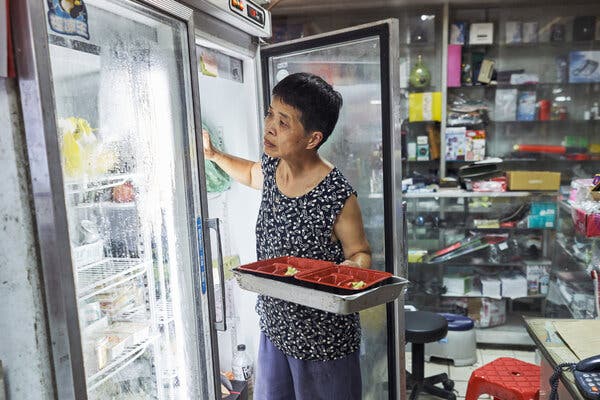 Pao Yu-ling believes economic growth should take priority and admires the new buildings that have gone up on Chinese islands nearby. Credit…An Rong Xu for The New York Times 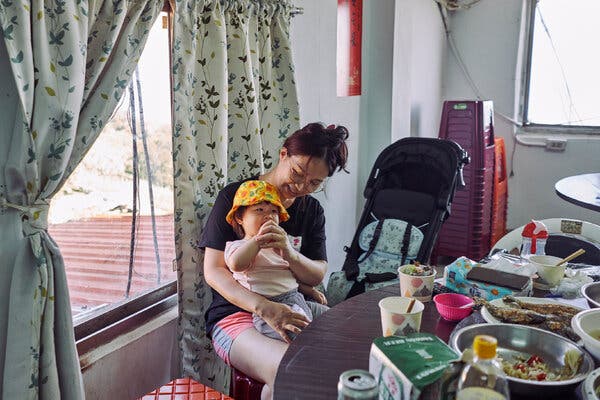 Her daughter, Chang I-chieh, thinks that freedom and democracy are paramount. Credit…An Rong Xu for The New York Times

“Sun Yat-sen, our founding father, took so long to win the revolution to get us out of the dictatorship, why should we return?” she said.

The trend is even more apparent further from China, on Taiwan island itself, where the majority of the 23 million people live. There Jessica Fang, a 26-year-old consultant in the central city of Changhua, said along with democratic values, the constant menace of attack is increasingly baked into the worldview of her generation.

With the current tensions, many watching from outside Taiwan seemed to expect Taiwanese to be “hysterically” stockpiling food and crafting evacuation plans, Ms. Fang said, adding that she was offended by the perception. “Taiwanese people appearing calm in the face of rising tension is not due to ignorance or naïveté, but because this is accepted — even internalized — as a part of being Taiwanese,” she said.

Still, she acknowledged recent military posturing from China has led her to take the prospect of an attack more seriously. If the Taiwan Strait does become a battleground, Ms. Fang said she would send her parents to safety, then stay and fight, though she admitted, picking up arms may not be the most effective way for her to contribute.

A handful of people on the Taiwanese islands near China did catch a glimpse of the drills. On Kinmen, Chiu Yi-hsuan, a 39-year-old owner of an independent bookstore, said she felt a shock wave on Thursday. “At first I thought it was thunder, then I realized it wasn’t,” she said. 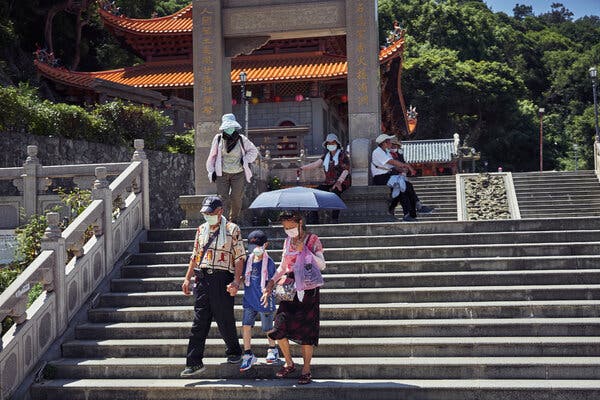 Tourists visiting a temple on the Matsu Islands on Thursday. Credit…An Rong Xu for The New York Times

Even so, she was unfazed. “This reminds me of my childhood memories of dodging bombs,” she said, adding the current threats were no big deal compared to the past.

To the north, on the island chain of Matsu, Tsai Hao-min, a 16-year-old high school student, said he heard an explosive sound and saw a brief burst of light. He showed off an image he had captured on his phone of two parallel contrails rising from the coast of China.

During a year spent living in China, Mr. Tsai came to admire aspects of the country, like its economic growth and tech prowess. Still, he said he planned to join Taiwan’s military when he was old enough. He prefers Taiwan for its freedom of expression.

In response to rising tensions with China, he crafted a meme out of images from the British sitcom, “Mr. Bean,” which showed the titular character checking his watch and falling asleep. Above them, he added his own message: “So is the Party going to attack?” referring to the Chinese Communist Party by a derogatory nickname.

He said his outlook on China is shared unanimously by his friends and that they did not take seriously the prospect of invasion. As has often been the case, he said, China’s fury was for show.

“The two missiles made for beautiful pictures. If they have so much money, why don’t they shoot more,” he said. 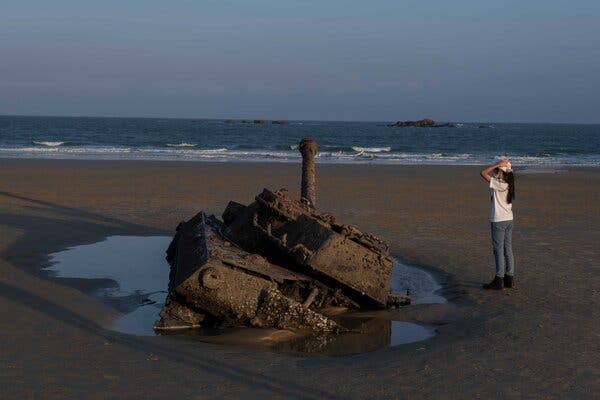 A rusting tank on the beach in Kinmen County, Taiwan. Now, more and more, Taiwanese identify themselves as separate from China. Credit…Lam Yik Fei for The New York Times