Source: The Guardian (3/20/22)
Chinese article urging country to cut ties with Putin gets 1m views
Essay on US site republished in China before being censored, reflecting balancing act between Russia and west
By Helen Davidson in Taipei 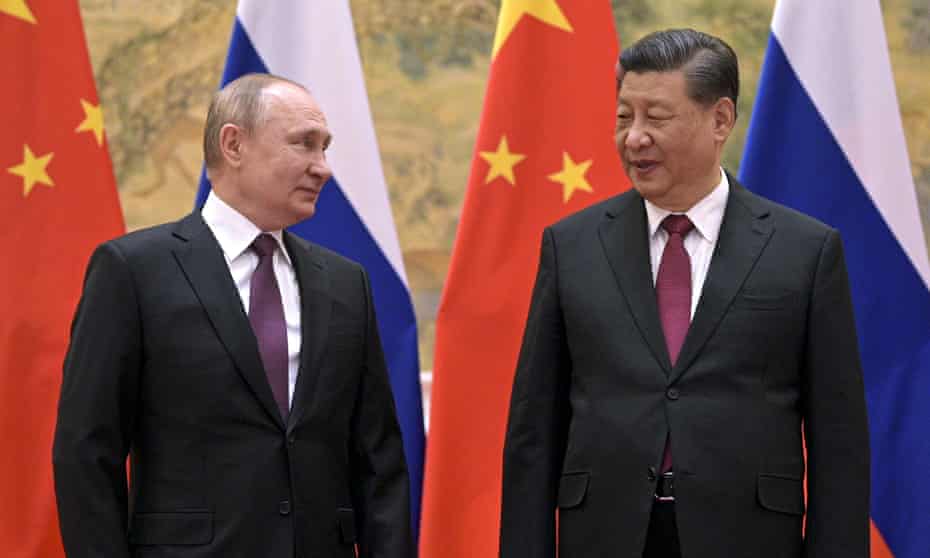 When an essay from a prominent Shanghai scholar suggested China needed to cut ties with Vladimir Putin as soon as possible over the Ukraine war, the online reaction was swift.

Despite being published late on a Friday evening in the Carter Center’s US-China Perception Monitor, Hu Wei’s essay soon gained a million views in and outside China, and was republished into Chinese blogs, non-official media sites and social media accounts.

Then came the backlash, as the article was criticised for being “reckless and dangerous” vitriol. Personal attacks on Hu and the USCPM followed. By Sunday morning, their websites were blocked in China.

“Usually when the government or the censors don’t like a particular article – like [something published by] FT Chinese – they’ll just block that particular article, they don’t block the website,” said Liu Yawei, the director of the China programme at the US-based Carter Center.

“So this is highly unusual.”

China’s position on the invasion and how far it is willing to go in supporting Russia is one of most stridently debated topics of the war, but inside China the conversation is strictly controlled, with little tolerance for dissenting views.

“I’d read a lot of commentaries in Chinese media outlets, and Prof Hu’s article certainly disagreed with the majority of those articles,” said Liu. “Hu actually tried to say these are dangerous views … I made the quick decision to put it out.”

Published in English and Chinese, Hu’s essay argued that Russia’s advancement was faltering and China needed to cut ties with Putin “as soon as possible” to avoid being on the losing side and facing “further containment” from the US and the west.

“China should avoid playing both sides in the same boat, give up being neutral, and choose the mainstream position in the world,” he wrote.

Since the 24 February invasion, China has struggled to navigate an awkward position as a close ally of Russia but one unwilling to share the international condemnation and economic sanctions. It has sought to hold incompatible positions respecting Ukraine’s sovereignty and what it calls Russia’s “security concerns”. The confusion is reflected in its media and public statements.

Hu is among a number of significant Chinese voices to challenge the official line. Wang Huiyao, the president of the Beijing-based thinktank the Center for China and Globalization, argued in the New York Times that western alliances would grow stronger and closer as the war dragged on. “That is not good for China,” he said, calling for the west to bring Beijing on as a mediator and “offer the Russian leader an offramp”, which in turn could repair China’s international standing.

The messaging from China’s leadership and state media has largely presented the government as a neutral peacemaker, but blaming the US and Nato for the conflict and not criticising Russia and Putin – a key ally with whom Xi Jinping signed a “limitless” partnership shortly before the invasion.

There is an apparent effort by Chinese state media to report the facts of casualties and attacks neutrally, and directives have reportedly been issued to avoid particular stances for or against Russia and Ukraine. The dominant angle is anti-western, and government mouthpiece editorials have accused the US of fake news over claims that China may give Russia weapons.

But observers have noted the evening news has avoided depicting Ukrainian victims or damage which might engender sympathy, and is still not referring to it as an “invasion”. Reports and officials have also amplified Russian disinformation and propaganda, including conspiracy theories that the US is funding chemical weapon-producing biolabs in Ukraine, or fake polling that Ukrainians support the invasion, according to the Taiwan-based media analyst Doublethink Labs.

Foreign-facing English-language media appears to be more inclined to report on Russian atrocities and refer to it as a “war”, signalling an awareness that its position on Russia is not being well received, but this too is contradicted by the disinformation and rhetoric coming from foreign officials.

“English-language publications – such as CGTN – are directed at foreigners, and operate according to an entirely different propaganda script,” says Prof Carl Minzner, a China scholar and professor of law at Fordham law school. “But since those aren’t directed at Chinese citizens, they aren’t a good measure for evaluating how Beijing seeks to depict the conflict for its home audience.”

In non-official media and social media, pro-Russian rhetoric is much more common.

The pro-Russian discourse among Chinese internet users aligns with – or perhaps was born of – the strong anti-US sentiment which has fostered in recent years, says Liu. “It is dangerously negative,” says Liu, and impossible to quantify.

“Thats why Hu’s voice is important,” says Liu. “We don’t know the percentage of who he’s representing but it’s an important dissenting voice.”

There is huge interest in the conflict and news stories are trending with hundreds of millions of views and tens of thousands of comments. Dissenting voices are there, mostly concerned about the impact on civilians. But they are few and far between, and subject to censorship.

On Friday Wang Jixian, a Chinese national in Odesa, posted two new video diaries to YouTube – a site banned in China – in which he railed against Putin, calling him a “coward” and “villain”, as well as against Putin’s supporters, and the Chinese authorities for shutting down debate.

Wang, whose videos have amassed hundreds of thousands of views, said much of his content had been “cancelled” and he had been blocked from sending messages on WeChat and from contacting his parents, who are still in China. He asked people to tell them he was still alive.

“Why are you pressuring my parents? Your power is bestowed to you by your people, with your guns and bombs, are these for you to fire at your own people? Do you like oppression that much? Come on, fire at your own citizen!” he said.

“Making up lies is the only technique and language you have, right? I know I am gonna see more rumours about me, but do you think I really care?”

Wang’s videos have drawn vitriol on the Chinese internet, including accusations of being a friend of separatists, a China-slanderer, a US-worshipper, and an embarrassment to Beijingers.

Liu hopes Hu, who is still in China, is not punished for his essay.

“For scholars to express their own opinions, and [to] allow people to debate, is very important trait of any great power,” he says. “China says it’s a great power and any great power should have the self-confidence to allow healthy, vibrant discussion.”