Source: NYT (1/3/22)
How Beijing Has Muted Hong Kong’s Independent Media
阅读简体中文版 | 閱讀繁體中文版
Citizen News, a small but aggressive online publication, is the latest outlet to fold amid relentless pressure from the authorities.
By Austin Ramzy 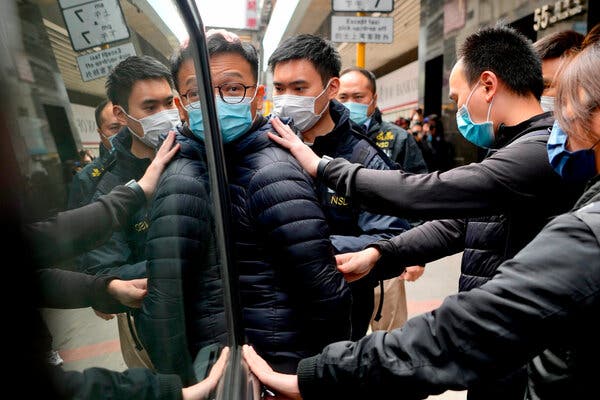 HONG KONG — Citizen News, a small online news site in Hong Kong known for its in-depth coverage of courts and local politics, said it would stop publishing on Monday night, deepening concerns about the collapse of the city’s once-robust media.

The latest closures are the final chapters in the demise of independent media in Hong Kong, a city that once had some of the freest and most aggressive news media in Asia. Now, as Beijing continues a sweeping crackdown on the city, the journalists who once covered the city’s protests and politics are increasingly either under arrest or out of work, without anywhere to publish.

“What’s happening is not just another closure of a media outlet,” said Lokman Tsui, a former journalism professor at the Chinese University of Hong Kong. “This is part of a larger project by the government of dismantling all critical media, of all independent media in Hong Kong.”

Beijing has targeted news outlets that rose with the city’s pro-democracy protests. 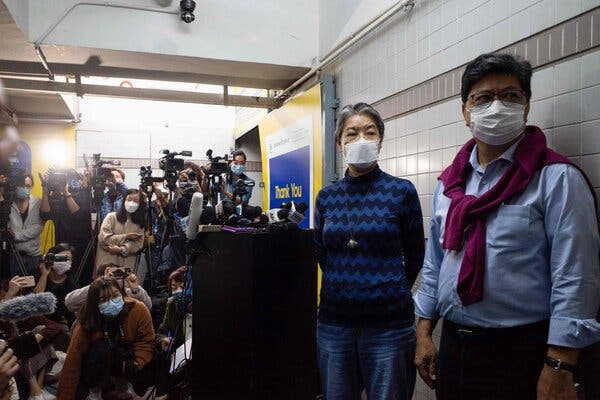 Stand News and Citizen News were part of a flourishing media scene that arose covering pro-democracy protest movements in Hong Kong. They carried few advertisements, instead relying on donations. They were built for online readers, often livestreaming protests for hours on end.

When the protest movement was stamped out by widespread arrests and a sweeping security law, they turned their focus to the courts, documenting dozens of criminal cases against protesters and opposition politicians.

Citizen News was founded five years ago by a handful of editors and reporters with long experience at other news outlets in Hong Kong. The company’s small size sometimes meant they couldn’t match the comprehensiveness of larger publications. But they dug into local issues, often delivering scoops on how the authorities were pressing their legal campaign against the opposition.

In September they were the first to report that prosecutors planned to argue that a group that held annual vigils to mourn the victims of the 1989 Tiananmen Square crackdown was subversive because of its slogan, “End one-party dictatorship.”

As journalists continued to be arrested, Citizen News’ executives said they realized that publishing such work might no longer be safe.

“We haven’t changed,” Daisy Li, the chief editor of Citizen News, told reporters on Monday. “It’s the exterior, objective environment that has changed. As the chief editor, I’m not able to decide whether this story, that reporting or this quote, if published, will violate the law in this changed environment.”

The end of Apple Daily set off a chain of arrests and closures. 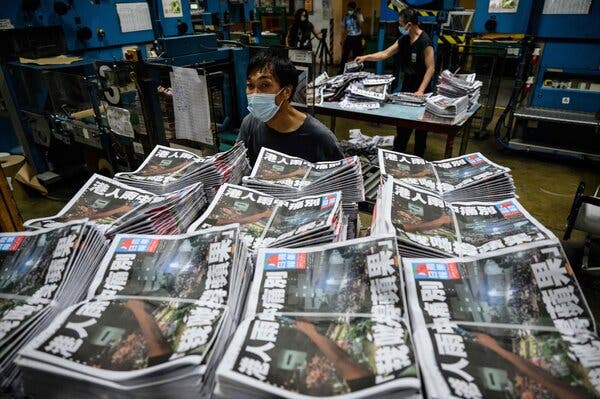 Apple Daily employees during the printing of the last edition of the newspaper in Hong Kong on June 24, 2021. Credit…Anthony Wallace/Agence France-Presse — Getty Images

The newer digital outlets drew inspiration and staff from Apple Daily, the aggressively independent newspaper founded in 1995 by the tycoon Jimmy Lai. Mr. Lai was vociferously anti-communist and promoted a freewheeling style of tabloid journalism, as aggressive in covering government malfeasance as it was in chasing celebrity gossip.

Mr. Lai was long a thorn in Beijing’s side. But after he and several Apple Daily executives were arrested and the publication was forced to close last year, the authorities’ attention turned toward smaller independent outlets like Stand News and Citizen News. While they avoided the tabloid sensibilities of Apple Daily, they were equally focused on scrutinizing the government and giving voice to opposition figures, angering the authorities.

“They were super-professional in their news analysis, super-rigorous in their fact-checking and also, this is the important part, they were not afraid to speak truth to power,” Mr. Tsui said. “That’s what’s doing them in right now.”

Weeks before the raid on Stand News, Hong Kong’s security secretary, Chris Tang, accused the outlet of “biased, smearing and demonizing” reporting on conditions in the city’s prisons.

Traditional news outlets, too, have been increasingly restrained. 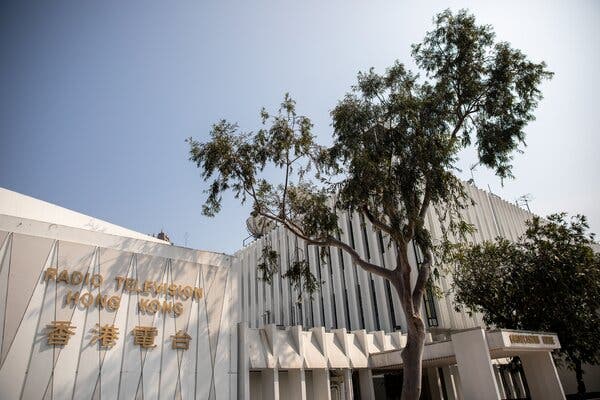 The headquarters of Radio Television Hong Kong, RTHK, a public broadcaster that has started hewing closely to official pronouncements and offering staid recounting of government activities. Credit…Jerome Favre/EPA, via Shutterstock

As independent outlets have shuttered, traditional news media has grown increasingly cautious. Radio Television Hong Kong, or RTHK, a public broadcaster long considered one of Hong Kong’s most reliable news providers, has been remolded by the government into something that critics say more closely resembles Chinese state media, hewing closely to official pronouncements and staid recounting of government activities.

When Peng Shuai, the Chinese tennis star, accused a former senior Communist Party official of sexual assault last year, she set off the sort of political scandal that traditionally would have dominated Hong Kong media. But mainstream outlets initially ignored the development. RTHK’s website carried a single story from a month after the allegations first emerged that simply refers to the Women’s Tennis Association’s concerns about her safety, without detailing Ms. Peng’s allegations.

Ming Pao, a centrist Chinese-language newspaper, at first carried the news only in its business pages. That article examined the effect on companies connected to the official, Zhang Gaoli, who was formerly a member of the Politburo Standing Committee, the top echelon of political power in China. Ming Pao’s chief editor, reached by phone, declined to comment on the coverage.

“Peng Shuai is the latest example where you can tell who is not afraid to speak truth to power and who is,” Mr. Tsui said. “That is really revealing to me that none of the main outlets were willing to put it on their cover or even discuss it.”

Beijing’s own media outlets now have a more commanding voice.

The silencing of independent news outlets has helped expand the influence of Beijing’s own publications. State-controlled newspapers Wen Wei Po and Ta Kung Pao have frequently used their pages to attack pro-democracy politicians, journalists and activists. Opposition politicians have said journalists from those newspapers sometimes tail them for days.

Their pages are closely monitored for clues as to what the security services might do next. When their attacks intensify, official actions often follow.

Last year, Ta Kung Pao published a series of articles attacking Stand News and accusing it of supporting terrorism for a piece that compared violent resistance campaigns in Northern Ireland and Hong Kong.

Beijing and Hong Kong have fiercely defended the crackdown. 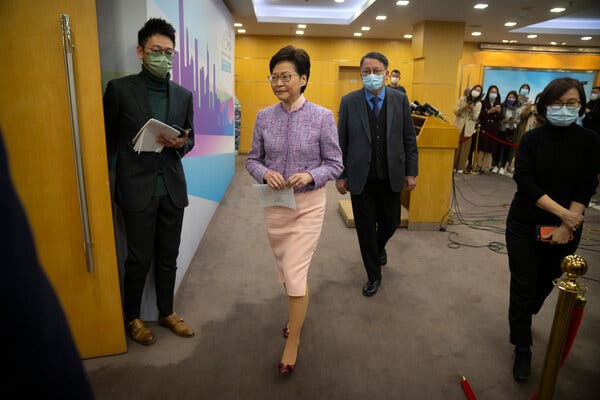 The arrests of journalists and closings of independent outlets have received widespread criticism from media freedom organizations and Western governments. After the raid on Stand News, Secretary of State Antony J. Blinken urged the Hong Kong and Chinese central governments to release detained journalists and media executives. “Journalism is not sedition,” he said.

Beijing has accused its critics in the West of seeking to destabilize Hong Kong. “These people have willfully misrepresented the lawful actions taken by the Hong Kong Police Force, vainly attempting to use press freedom as a shield for criminal acts and hamper the rule of law in Hong Kong through the straw-man trick,” the People’s Daily, the Communist Party’s flagship newspaper, said in an editorial.

In a letter to The Wall Street Journal, Hong Kong’s chief secretary, John Lee, has said that instead of criticizing the crackdown in editorials, the newspaper should support the arrests. “If you are genuinely interested in press freedom, you should support actions against people who have unlawfully exploited the media as a tool to pursue their political or personal gains,” he wrote.