Source: NYT (12/31/21)
China’s Ban on ‘Sissy Men’ Is Bound to Backfire
By Helen Gao (Ms. Gao is a writer based in Beijing, focusing on Chinese education, culture and society.) 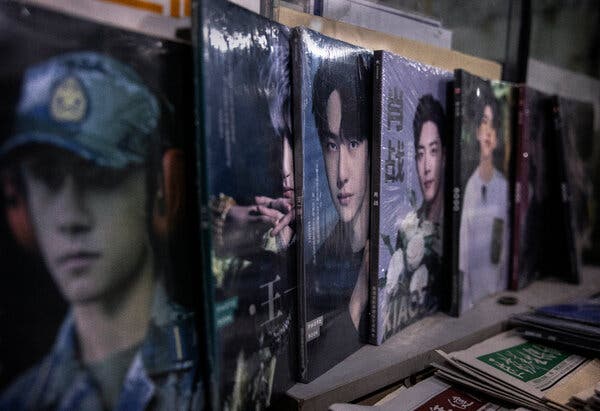 BEIJING — China is facing serious challenges on multiple fronts: Great power competition with the United States. Trade disputes. The future of Taiwan. But that doesn’t mean it’s too preoccupied to escalate a battle of another sort on the home front.

The Chinese government, you see, has been fighting what state news outlets have called a “masculinity crisis” for the past few years, with one top official warning that “effeminate” men in popular culture were corrupting “a generation.” The Chinese Communist Party mouthpiece decreed that young men need to have “toughness and strength” and censors have blurred out male celebrities’ earrings in television and online appearances.

That campaign has now taken a harsher turn. In recent months, the government has dialed things up into a full-blown culture war against unorthodox masculine expression, policing it in earnest.

In a slur-laden directive, television regulators in September banned “sissy men and other abnormal aesthetics” from appearing on television. Then in late November regulators cracked down on celebrities’ online profiles, their fan groups and advertising, citing “abnormal aesthetics” and threatening to shut down the online accounts of those who failed to fall in line.

Stars like Cai Xukun, one of China’s most famous singers, went from sporting makeup and blond bangs on social media to biceps and baggy jeans on a magazine cover just two weeks after the September decree.

The stated goal of this campaign is to ensure that China stays on its path toward so-called “national rejuvenation” — President Xi Jinping’s plan for the country to regain its standing as a great power. The pressure to deliver on that plan is mounting ahead of the next Communist Party congress, likely to be held in 2022.

The party appears to believe that national rejuvenation is only possible if young men work diligently toward its orders and priorities: Mr. Xi has said “a nation is strong if its youth are strong.” By that (flawed) logic, femininity is a sign of weakness that, if unchecked, bodes ill for the nation’s future.

So while the prevalence of “effeminate” males was previously a source of general concern, it is now seen as a roadblock for Mr. Xi to clear. But the campaign, including the newly restrictive and more heavy-handed phase of recent months, is completely misguided and self-defeating. As the restrictions proliferate, they become impossible to enforce without undermining other governance priorities, like economic growth, that are vital components of national rejuvenation. Never mind that the objective of the campaign itself is ludicrous.

The crusade against what the party sees as unorthodox masculinity might be a way for the party to distract from the fact that it is failing to deliver for its people and is unable to address serious economic and social issues — a lack of upward mobility, career opportunities and affordable urban housing in some of the main cities.

But in trying to regulate gender expression as it does governance goals like G.D.P. figures, the party is pushing its control too far. And the masculinity mandates will almost certainly backfire.

The biggest target of this campaign is “little fresh meat,” a term of endearment for massively popular makeup-wearing male entertainers. In a society where discussing politics is largely off limits and traditional media is tightly controlled, popular culture is the rare realm where individualism can thrive. And so the “little fresh meat” phenomenon is about more than fashion and aesthetics; it offers an outlet for Chinese men and women at a time of economic uncertainty and a shifting power dynamic between sexes.

The cultural power of “little fresh meat” stars is indisputable. What the party appears to ignore, though, in blaming them for allegedly corrupting young men is that their fan base is predominantly female and in wealthy metropolises like Beijing and Shanghai.

These women’s embrace of a more fluid form of masculinity is not a phenomenon the party should dismiss. Well-educated and financially independent, these women are bucking gender norms themselves by turning away from matrimony and motherhood and are proving to be resistant to the party’s push to boost marriages and births to offset the effects of an aging population.

To this end, the party would do well to heed these women’s preferences. As some fans put it, the seemingly gentle manner and mild temper of “little fresh meat” offer a welcome contrast to the chauvinistic attitude they can encounter in Chinese men.

“Having men be tender and thoughtful like women improves them,” one woman going by the name Jiangzi wrote in an online essay explaining her fondness for “little fresh meat.” “In dating and marriage,” she asked, “who likes to be scolded?”

Men in China face a number of social challenges too. The difficulties of finding employment and affording urban living have tended to weigh more heavily on men, who shoulder society’s expectations to earn and provide. Chinese men also vastly outnumber women in the marriage marketplace, thanks to decades of family planning policies. When taken with the constraints of living in a society with rigid ideas regarding masculinity, pop culture is a form of escape — and a place where different identities can be explored.

Shaming and blocking these individuals’ preferred means of expression is not a way to motivate them toward “valiant struggle” in the name of national rejuvenation. Rather, it’s a recipe for diving deeper into despair.

The government’s idea of the ideal male reads like an outdated description of 1950s gender norms: Muscular, reliable, career-oriented providers. The “masculine spirit” requires physical and mental fitness as well as “strong will power,” the Ministry of Education said earlier this year. An editorial published by a party mouthpiece said it is alive in those who “set high goals in life, dare to take on responsibilities, tackle difficulties head-on, and never give up easily.”

Indeed, what the party seeks sounds less like Rambo than assiduous scientists and industrious engineers. When viewed alongside other recently-introduced and draconian cultural policies, it’s clear that what the party wants is productive socialist workers devoted single-mindedly to its own development priorities — not distracted by what the party considers cultural deviance or excess.

So why then is the party demanding those attributes of only half the population? In its quest for economic supremacy, surely the party should not exclude the contributions of women, whom Mao Zedong once dubbed “half the sky.” And it can’t afford to: China’s work force is dwindling at an alarming rate.

The party must be aware of the glaring contradictions between its claims and its practice. Despite insisting that masculinity has to do with inner qualities in editorials and policy documents, it continues to target outer appearances in patrolling its public expression.

That could very well be because while hollow propaganda may travel far and wide, authoritarian tools have limits. They can draw boundaries within people’s lives but not dictate what grows within. And so the party is tethering itself to sensational labels, though even those can only go so far.

As the party’s draconian rules begin to cancel each other out, they also take their toll on young people, choking off the very vitality that is the true basis of national rejuvenation.

Helen Gao (@yuxin_gao) is a writer based in Beijing and a native of the city. Her work has appeared in The New York Times, Foreign Policy, and The Atlantic.