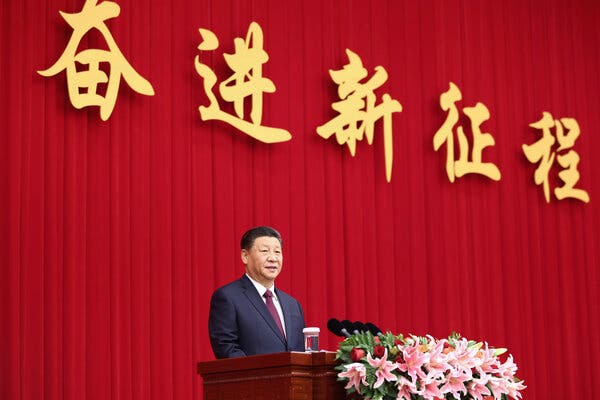 Xi Jinping has declared that China’s Communist Party will work toward “common prosperity,” and he has pressed businesses and entrepreneurs to give back more to society. Credit…Ju Peng/Xinhua, via Associated Press

Four decades ago, Deng Xiaoping declared that China would “let some people get rich first” in its race for growth. Now, Xi Jinping has put China’s tycoons on notice that it is time for them to share more wealth with the rest of the country.

Mr. Xi says the Communist Party will pursue “common prosperity,” pressing businesses and entrepreneurs to help narrow the stubborn wealth gap that could hold back the country’s rise and erode public confidence in the leadership. Supporters say China’s next phase of growth demands the shift.

“A powerful China should also be a fair and just China,” Yao Yang, a professor of economics at Peking University who endorses the shift in priorities, said by email. “China is one of the worst countries in terms of redistribution, despite being a socialist country. Public spending is overly concentrated in cities, elite schools and so on.”

Officials are pledging to make schooling, housing and health care less costly and more evenly available outside big cities, and to lift incomes for workers, helping more people secure a place in the middle class. The “common prosperity” campaign has converged with a crackdown on the country’s tech giants to curb their dominance. Facing scrutiny, some of China’s biggest billionaires, like Jack Ma, have lined up to pledge billions of dollars to charity. 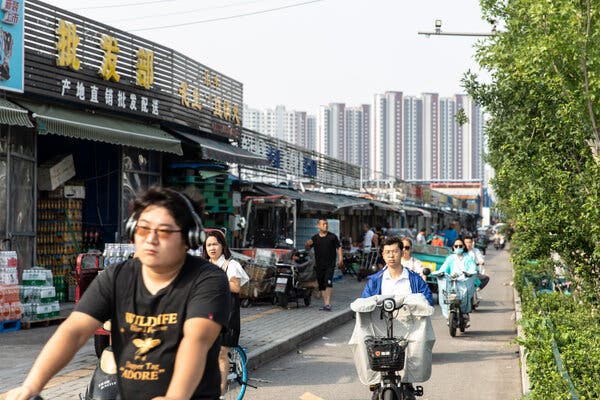 Officials are pledging to make housing less costly and more evenly available outside big cities, and to lift incomes for workers. Credit…Qilai Shen for The New York Times

Now that economic growth is moderating, many young Chinese feel that upward mobility is diminishing. Well-paying white-collar jobs can be hard to find. Tech workers complain of punishingly long hours. Families feel they can’t afford to have more children, adding to a looming demographic crisis. For now, Mr. Xi faces little opposition, but longer term that could turn if such grievances pile up.

“Achieving common prosperity is not just an economic issue; it’s a major political matter bearing on the party’s foundation for rule,” Mr. Xi told officials in January. “We cannot let an unbridgeable gulf appear between the rich and the poor.”

The party is keen to show that it is listening to the complaints as Mr. Xi lays the groundwork for a likely third term as the party’s general secretary beginning next year. Mr. Xi wants to stave off any doubts about his claim to another term by arguing that the party can deliver social progress while rivals like the United States stagnate in inequality, said Christopher K. Johnson, a former United States government analyst of Chinese politics​​.

“While there’s no opposition that’s going to stop him, he’s got to deliver a report card,” said Mr. Johnson, now the president of the advisory firm China Strategies Group. “Xi sees doing something on income inequality and the wealth gap in China as vital in this struggle of global narratives with the U.S. and the West in general.”

To China’s leaders, the new emphasis targets economic needs as well. The country’s top 1 percent own nearly 31 percent of the country’s wealth, according to Credit Suisse Research Institute, up from 21 percent in 2000. (The top 1 percent in the United States own about 35 percent, according to the study.) By spreading wealth more evenly, the Communist Party says, more Chinese would have the spending power to drive the economy and reduce China’s reliance on Western capital and know-how, creating the foundation for a new stage of growth.

While the party’s power is formidable, some changes under discussion have the potential to touch raw nerves. The real test of how far Mr. Xi wants to reverse economic inequality would be if the government pushed through measures such as introducing property and inheritance taxes aimed at the rich. Such moves could be challenging because many of the elite have links to the party, and anger could flare among many Chinese people who have bought up housing as their main investment. 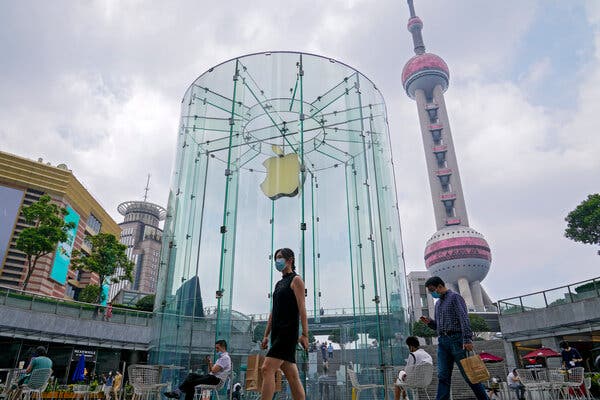 Mr. Xi has said that the country must make “substantive progress” on achieving “common prosperity” by 2035. Credit…Andy Wong/Associated Press

The scope of Mr. Xi’s push for a more egalitarian society is up for debate. Many officials have called for gradual changes and sought to assure entrepreneurs that legitimately earned fortunes are safe. Even so, commentaries calling for a broad shake-up of wealth have been shared widely in past weeks on Communist Party-run media websites, suggesting some support for more far-reaching measures.

“This transformation will wipe away all the dust, and capital markets will no longer be the heaven where capitalists can make a fortune overnight,” said one online commentary that was shared by Xinhua, the main official news agency. “This is a political transformation.”

Mao Zedong used the phrase “common prosperity” in the 1950s, in the early stages of pushing China toward socialist collectivization that culminated in a disastrous Great Leap into communism. In the 1980s, Mr. Deng said that China should let some get rich first to lift the economy, but that “common prosperity” was the distant ultimate goal.

Mr. Xi has also tried to avoid igniting expectations of overnight transformation. After declaring last year that China had eradicated extreme rural poverty, he has said that the country must make “substantive progress” on achieving “common prosperity” by 2035.

An early test of Mr. Xi’s ambitions will be in Zhejiang, a province on China’s east coast, which he has picked to establish “common prosperity” demonstration zones. The Zhejiang government recently released a 52-point plan to achieve common prosperity, which sets out broad targets.

By 2025, the average disposable income per person across Zhejiang must reach around $11,500, according to the plan, over 40 percent higher than current levels. The province could promote collective bargaining to give employees a stronger voice in wage negotiations, Li Shi, an economics professor at Zhejiang University in eastern China who has advised officials the plans, said in a recently published article in a national newspaper. Professor Li said the province could also promote policies to give workers shares in company profits. 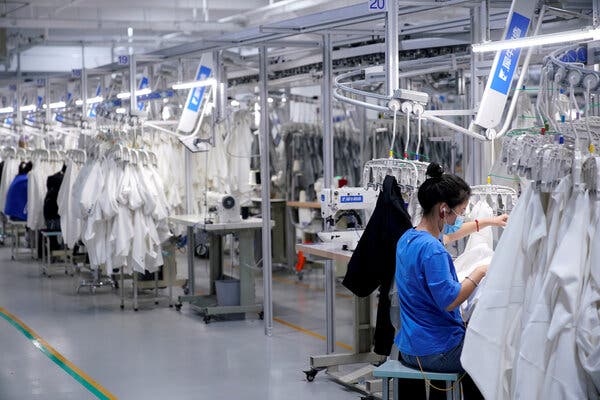 A factory in Hangzhou, Zhejiang’s capital.The income gap is all too apparent to some residents of the city. Credit…Aly Song/Reuters

The income gap is all too apparent to some residents in Zhejiang’s capital, Hangzhou, once a picturesque backwater that now is home to luxury cars, fashion shops and high-end apartments.

“There’s too much pressure on the middle class,” said Nancy Sun, a software programmer in Hangzhou, whose family in Zhejiang sells cement. She was preparing to marry and maybe have two children, she said, but felt daunted by housing and education costs. Faced with a rapidly aging population, the government has begun to encourage each couple to have three children after decades of harsh one-child limits, but like many young women, Ms. Sun was not interested.

“No, the economic pressures are too much,” she said. “On top of you there are at least four elderly people, and below you have two or three kids.”

In its plan, Zhejiang wants to reduce the cost of child care and housing to help residents like Ms. Sun. The plan also calls for “excessive income” to be regulated and charity to be expanded, while aiming to show that Mr. Xi’s wealth sharing vision will not stifle private business.

Zhejiang, where Mr. Xi served as provincial party chief for four years beginning in 2002, is home to some of China’s most successful private companies, including Alibaba, the online shopping giant. One in six of the nation’s billionaires comes from there, according to Hurun Report, a firm that tracks the wealthy in China.

Chinese companies and entrepreneurs have scrambled to show they are on board. Mr. Ma, the co-founder of Alibaba and one of China’s richest people, said in his first public appearance in January after months of scrutiny of his businesses, that it was the “responsibility and duty” of entrepreneurs to strive for “common prosperity.” Last week, Alibaba announced that it would plow $15.5 billion into “common prosperity” projects, including rural health care and insurance for delivery workers. 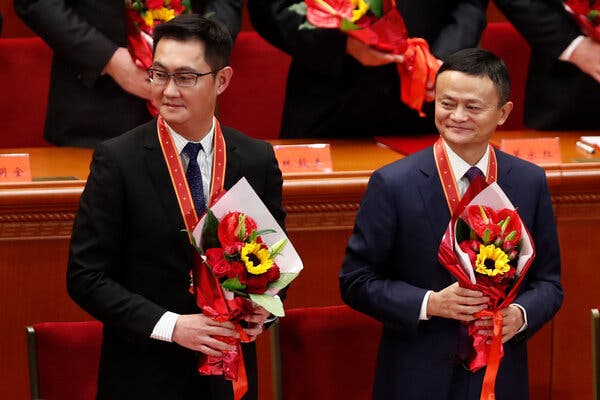 China’s biggest billionaires, like Jack Ma, right, and Pony Ma of Tencent, have lined up to pledge billions of dollars to charity. Credit…Wu Hong/EPA, via Shutterstock

Tencent, the country’s biggest internet company, also said it would set aside $15.5 billion for social aid programs. Wang Xing, the billionaire founder of Meituan, a food-delivery app that has been the subject of an antitrust investigation, transferred more than $2 billion of his shares to his philanthropic foundation.

Many of these companies have felt the sting of the government’s antitrust crackdown. The government also banned nearly all private tutoring services, which Beijing has depicted as raising the cost of education, a move that erased tens of billions of dollars of value from the shares of tutoring companies.

The moves have unnerved some investors, who fear greater state intervention.

“While China, like the U.S., finds itself having to confront the challenge of rising inequality, crushing the country’s entrepreneurs hardly seems the right approach,” said Fred Hu, the founder and chairman of Primavera Capital Group in Hong Kong. “It might unintentionally lead to a different kind of ‘equality’ — making China’s population equally poor.”

Professor Li of Zhejiang University and other advisers have urged the government to bring in a property tax, long discussed and much delayed, on higher-priced homes. Officials, though, are likely to move cautiously on that idea, given the risks of opposition from wealthier urban residents who often own several homes.

Officials and advisers have also said that they want neither a European-style welfare state nor Mao-era egalitarianism. They say they want to create an “olive-shaped” society with a big middle class and few at the extremes of wealth or poverty.

“Having wealthy people play a bigger role is not a matter of robbing the rich to help the poor,” Professor Li said in a telephone interview. The changes should be measured and steady, he said. “All areas must also guard against becoming divorced from reality.”

Even in relatively wealthy areas, some say it is time to spread public spending more evenly and make more school places and medical beds available outside big, privileged cities.

“The best doctors are all concentrated in Shanghai and Beijing,” said Yuan Jiameng, a Zhejiang native working in Beijing who said she recently searched for treatment for her father for a stomach ailment.

To her, the notion of “common prosperity” remained distant. “In real life,” she said, “they’re not words that we use much.”

Chris Buckley is chief China correspondent and has lived in China for most of the past 30 years after growing up in Sydney, Australia. Before joining The Times in 2012, he was a correspondent in Beijing for Reuters. @ChuBailiang