Source: NYT (8/12/21)
This Boy Band Is the Joy That Hong Kong Needs Right Now
阅读简体中文版 | 閱讀繁體中文版
The popularity of the group, called Mirror, has offered the city a rare burst of unity and pleasure after years of political upheaval.
By Vivian Wang and Joy Dong 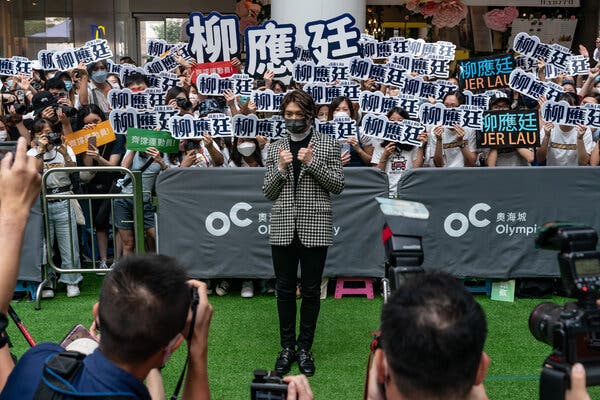 Jer Lau, a member of Mirror, the Cantopop group, during a promotional event in Hong Kong last month. Credit…Anthony Kwan for The New York Times

HONG KONG — They swarm public squares, crowd shopping malls and form lines that stretch several city blocks. They lean over barricades that strain to hold them and ignore police officers who try to corral them.

The crowds filling Hong Kong in recent weeks aren’t protesters fighting for democracy. They are devotees of the city’s hottest boy band.

For more than two years, Hong Kong has badly needed a source of uplift. First there were the mass protests of 2019, then the coronavirus pandemic, then a sweeping national security law. The city has been politically polarized and economically battered.

Enter Mirror, a group of 12 singing and dancing young men who seemingly overnight have taken over the city — and, in doing so, infused it with a burst of joy.

Their faces are plastered on billboards, buses and subway ads for everything from granola to air-conditioners to probiotic supplements. They have sold out concert halls, accounting for some of the city’s only large-scale events during the pandemic. Hardly a weekend goes by without one of the band’s (many) fan clubs devising a flashy new form of tribute: renting an enormous LED screen to celebrate one member, decking out a cruise ship for another.

The whole city has been swept up in the craze — if not participating in the infatuation, then lamenting its ubiquity, as on a 300,000-member Facebook group called “My Wife Married Mirror and Left My Marriage In Ruins.” 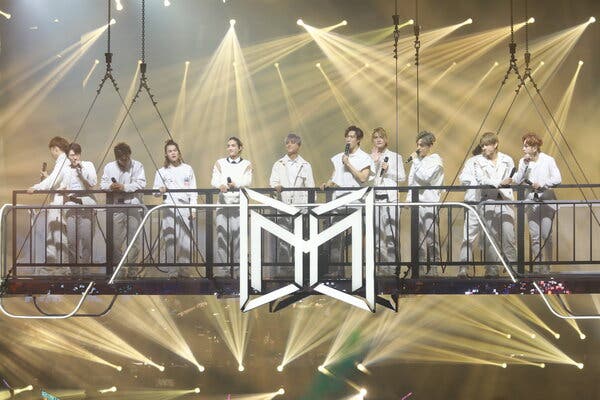 The group has sold out concert halls, accounting for some of the city’s only large-scale events during the pandemic. Credit…VCG, via Getty Images

As far as pop idols go, the band is familiar fare. Its lyrics hew to declarations of love and I-can-do-anything affirmations. K-pop’s influence is apparent in its tightly choreographed music videos and highly stylized coifs. Think BTS singing in Cantonese.

Little about the group reflects the political upheaval in its hometown. But Mirror, perhaps precisely because it offers an escape with a catchy beat, has provided a musical balm to an anxious city at an uncertain time.

“In the past two years, Hong Kong’s social environment has made many people, especially young people, feel very discouraged,” said Lim Wong, a 30-something finance worker as she lined up to take photographs by a fan-sponsored pink truck with the face of Anson Lo, a band member.

“They work for their dreams, and that kind of energy really fits Hong Kong at this moment.”

Though the group formed in 2018, through a reality show designed to manufacture a hit boy band, its popularity exploded this year. Fans cite a number of reasons: a strong showing at an awards show in January; the release of the group’s first full-length album; the pandemic, which left many Hong Kongers starved for entertainment.

Mirror’s ascent has also coincided with a new, more intense stage of the Chinese government’s pressure on the city. For people of all political persuasions, the band has become a sort of ideological canvas.

Some have claimed the band’s rousing beats for the battered pro-democracy movement. Gwyneth Ho, a 30-year-old opposition politician who was arrested after running in an informal primary election, has made her love for Mirror a motif in letters from jail. She said the first time she cried after her arrest was upon hearing “Warrior,” an anthem about perseverance.

“The worst that could happen is death, and I won’t avoid it,” Ms. Ho quoted from the lyrics.

Some also see Mirror as an emblem of Hong Kong identity, at a time when many fear that identity will be erased by Beijing.

Cantopop — pop sung in Cantonese, the local Chinese language — was once a major cultural export. Unabashedly commercial but also distinctly local in character, it ranged from sappy power ballads to pulsing dance tunes, folding in covers of Western hits and nods to social issues.

But interest flagged over the past two decades as the entertainment industries in South Korea, Taiwan and mainland China boomed. Many Hong Kong stars shifted their attention to the mainland. 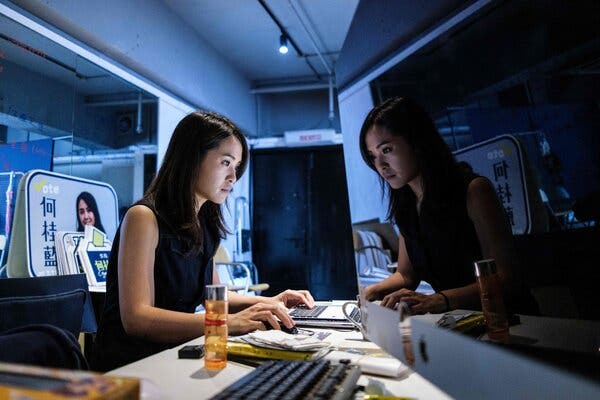 Gwyneth Ho, a pro-democracy politician, in her office a year ago. She has found comfort from the group’s songs in jail after her arrest earlier this year. Credit…Anthony Wallace/Agence France-Presse — Getty Images

“It’s because of Anson Lo and Mirror that I’ve become totally newly acquainted with Hong Kong local songs and artists,” said Henry Tong, a banker in his 20s visiting the pink truck. “It’s not just songs — there are also Hong Kong television shows and other productions.”

The band has also become entangled in attacks by government supporters. On social media, some mainland users have, without evidence, accused members of supporting Hong Kong independence. A pro-Beijing lawmaker recently suggested that a television drama starring two band members might run afoul of the national security law because it depicted homosexuality. (The group’s representatives did not respond to requests for comment.)

Other performers have become political targets. This month, officials arrested Anthony Wong Yiu-ming, a Cantopop star, for singing at a rally for a pro-democracy legislative candidate.

Some fans have parsed the band’s statements for signs of political leanings, pointing to an interview one member gave saying he was glad “Warrior” could cheer up Ms. Ho, the politician. 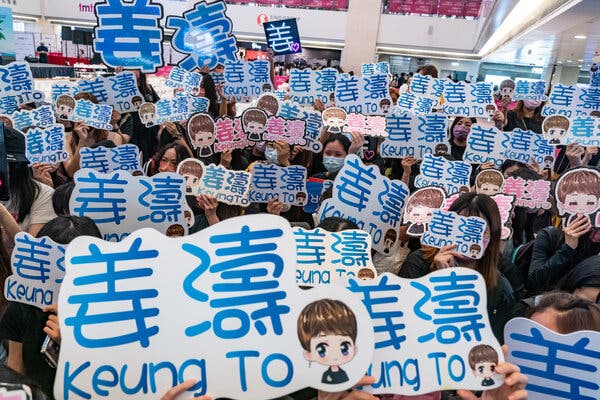 Fans of Mirror member Keung To at an event in Hong Kong last month. The most striking effect of the band’s takeover of Hong Kong has been its ability to unify a divided city. Credit…Anthony Kwan for The New York Times

Annie Yuen, who leads the fan club that organized the Anson Lo truck — as well as the cruise ship, several billboards and the sale of thousands of “Little Anson” dolls — said Mirror was a rebuttal to those who had cast Hong Kong’s protesting youth as rioters or malcontents.

“They were saying that Hong Kong youngsters have no contribution,” Ms. Yuen, who is in her 30s, said. Mirror showed that “Hong Kong young people could bring success.”

Still, Ms. Yuen emphasized that was not her main draw to Mirror.

“We want to just temporarily forget about the politics,” she said, “and just enjoy what they bring to us.”

Enjoy is an understatement. Spend five minutes talking to a Mirror fan, and the takeaway is not about Hong Kong’s social situation. It’s of pure, wholesome delight.

Mr. Lo, 26, is the heartthrob — but fans also moon over his work ethic and manners. Ian Chan, 28, is lovingly teased as a bookworm. Another member, Keung To, 22, won over many by discussing his experiences with childhood obesity and bullying.

The band has leaned into its hometown hero image, promoting a food drive and cheering on Hong Kong’s Olympic athletes. In interviews, members exude family-friendly goofiness, talking over themselves and ruffling one another’s hair. 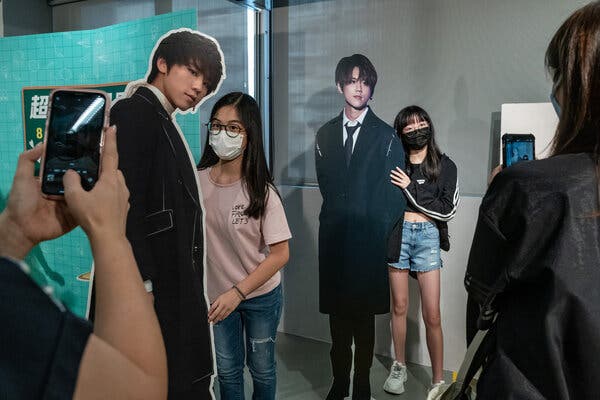 Fans posing for photographs with cut-outs of Mr. Keung at an event for the anniversary of his fan club in Hong Kong last month. Credit…Anthony Kwan for The New York Times

Christy Siu said she was enthralled by their singing, dancing and acting. She was especially proud of their performance at the January awards show, when the band, in sleek suits draped with silver chains, slinked and popped across the stage.

Ms. Siu, who is in her 20s, said she spends around $250 each month on products advertised by band members. She recently bought dozens of Mirror-endorsed toothbrushes.

In a way, the band is allowing young people to reclaim an innocence, said Anthony Fung, a professor at the Chinese University of Hong Kong who studies pop culture.

“Suddenly, they’ve realized that they could put down all these so-called big social things,” he said. “There is something more joyful, playful, that draws them away from the political impasse of their youth.”

The most striking effect of Mirror’s takeover of Hong Kong has been its ability to unify a divided city. Many fans said they wanted the band to reach as many listeners as possible, regardless of gender, age or political background.

The band seems aware of those hopes. At the end of a sold-out concert series in May, the members lined up onstage to thank their parents and fans. A few offered advice.

“This world is really complicated,” Mr. Chan said. “I hope that everyone here can remain simple and pure.”