Source: SCMP (7/16/21)
Hong Kong director has sold rights to protest documentary screened at Cannes, but says he won’t leave city in spite of risks
Hong Kong director Kiwi Chow says he does not want to be ruled by fear of the Beijing-imposed security law. His film, Revolution of Our Times, was screened at the Cannes Film Festival on Friday after being kept secret until the last minute.
By Kanis Leung

Filmmaker Kiwi Chow says he will not leave Hong Kong in spite of security law risks after his film was screened at Cannes. Photo: Reuters

The Hong Kong director of a protest documentary screened at the Cannes Film Festival on Friday has sold the copyright of the film to protect himself from legal repercussions, but has decided to stay in the city, saying he does not want to be ruled by fear of the national security law.

Kiwi Chow Kwun-wai, an award-winning local director, surprised the Hong Kong film industry on Friday by having Revolution of Our Times, a 2½-hour documentary about the city’s anti-government protests in 2019, featured at the internationally renowned cinema showcase in France.

But Chow, 42, told the Post he no longer legally owned the film after handing it off to a distributor in Europe, noting he had also taken the step of deleting all the footage in his possession.

“I sold my copyright too,” he said. “You can say it’s a kind of risk assessment. In Hong Kong, I did not do any distribution of the film and I don’t have any clips with me.” 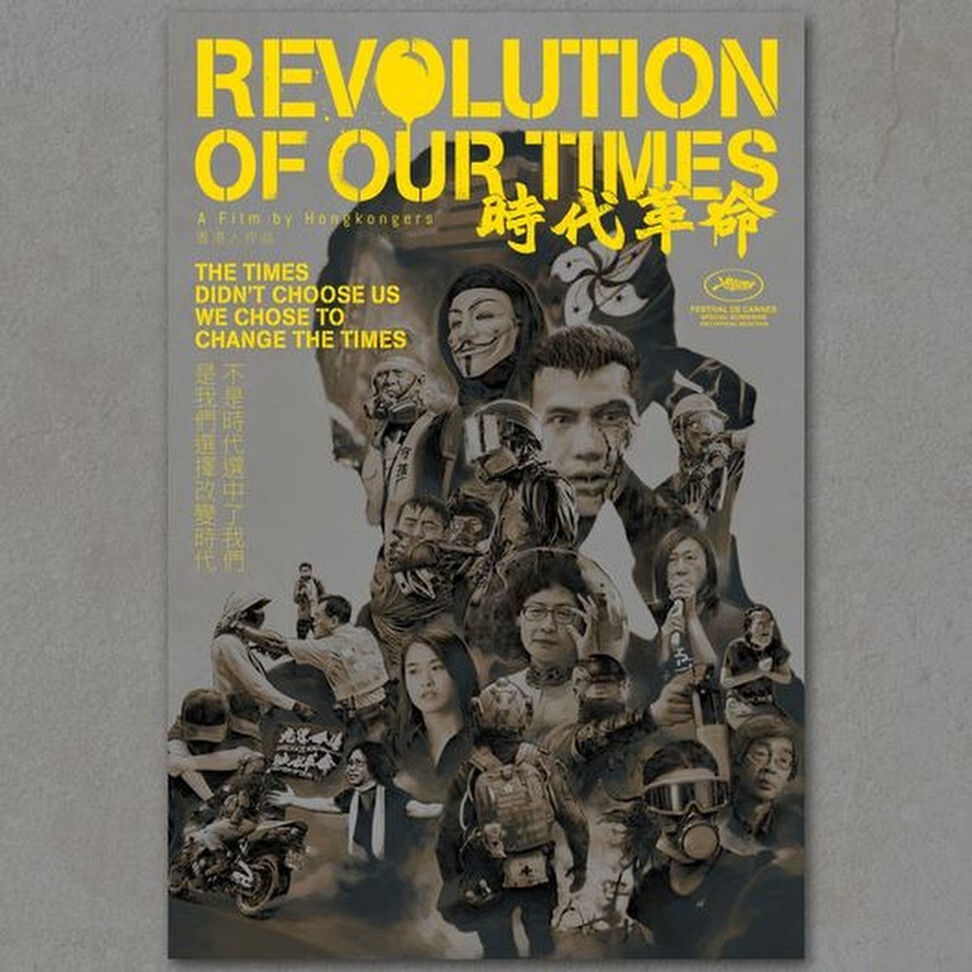 The poster for Kiwi Chow’s Revolution of Our Times, which screened at Cannes on Friday. Photo: Facebook

He added the film would not be screened in Hong Kong, publicly or underground, in the foreseeable future because he did not want to risk the safety of his team, interviewees and cinema operators.

Hong Kong’s artists and filmmakers have struggled to cope with the vaguely defined red lines of the Beijing-imposed security law, which bans acts of secession, subversion, terrorism and collusion with foreign powers.

Earlier this month, for instance, the Arts Development Council pulled a grant to the distributor of a controversial documentary about the fierce clashes between protesters and police at Polytechnic University in 2019 – the same protests Chow filmed. Its chairman has accused that film of “beautifying riots”.

A few weeks earlier, the government revised its film censorship guidelines to authorise examiners to ban movies deemed to be in breach of the security law.

The Cannes Film Festival kept Chow’s movie a secret up until the day before it was screened on Friday, and the director has been keeping a very low profile.

Chow said he started making the documentary in August 2019 – three months into the protests that began in opposition to a now-withdrawn extradition bill – after receiving a call from a businessman who offered to fund a film on the social unrest.

The businessman had seen the 2015 award-winning anthology film Ten Years, which painted a dystopian picture of Hong Kong life in 2025 under increasingly hardline Chinese rule, part of which Chow directed.

For the documentary, Chow went to the front lines of the demonstrations and followed several groups of protesters, social workers, volunteer paramedics, and an elderly man who was part of a group that sought to reason with police and “safeguard” the mostly young people taking to the streets. A still from Kiwi Chow’s Revolution of Our Times, which followed several people during the social unrest of 2019. Photo: Handout

Chow picked for the documentary’s title part of the ubiquitous protest rallying cry “Liberate Hong Kong; revolution of our times” – a slogan that has itself been deemed a violation of the national security law by authorities.

The slogan, which plays a central role in an ongoing security law trial, is currently being scrutinised by a local court as to whether it constitutes advocating Hong Kong independence.

Chow, however, said he did not think he had done anything unlawful.

“I had already decided on the title before the law kicked in,” he said. “Most of the filming was done before the national security law came. Will the law be retroactive? Then we will have to wait and see. But considering the risks, it is logical to think that there shouldn’t be any problems.”

Still, Chow admitted he was mentally prepared to be arrested, even though he stressed he was not promoting violence.

His friends, however, had already suggested he leave the city over his contribution to Ten Years.

But Chow said he chose to stay because he wanted to live in freedom.

“If I left Hong Kong, I would feel that I am not free any more, because my heart would be trapped by fear,” he said. “Staying in Hong Kong, I can face the risks. I feel the sense of fearlessness makes me feel free.”

He added he had discussed the dilemma with his six-year-old son, and asked him what would happen if his father was arrested because of the documentary.

His son told him that he believed Hong Kong’s government would “become good again” after seeing his film.

Chow said he pressed his son as to whether they should leave Hong Kong.

But his son said: “Don’t leave Hong Kong. We will stay in Hong Kong together and make Hong Kong beautiful again.”