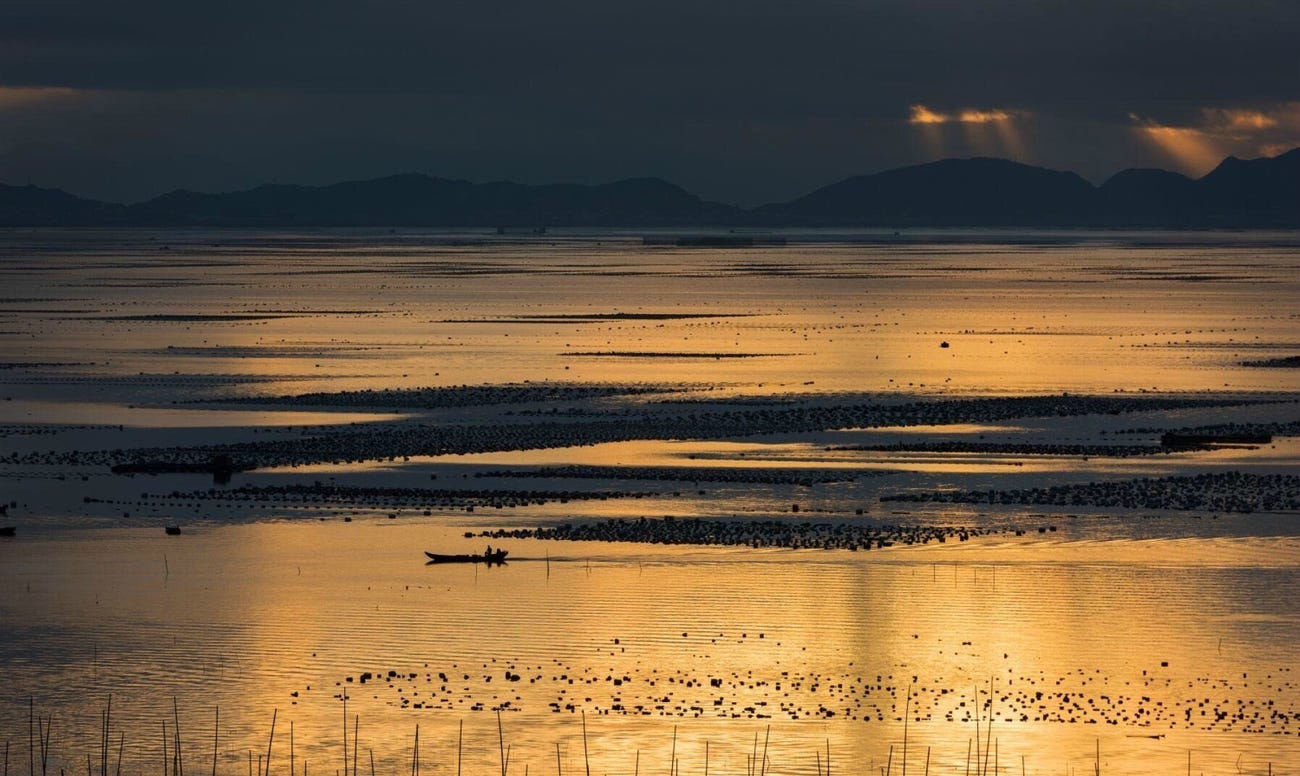 Xiapu County in Fujian province is almost a little too picture-perfect.

An idyllic sunrise dawns over Xiapu County, a rural town in Fujian, China. From Xiapu’s beaches, you can see a lone fisherman rowing his boat toward the endless horizon. And venturing deeper into the county, you might catch strains of a buffalo lowing and spot chickens scurrying about the lush farmland.

Photos of these scenic spots in the county abound on Weibo, the Chinese version of Twitter.

The catch? Most of them are manufactured.

Buffaloes? Farmers? Mist? Xiapu has it all — for a price. 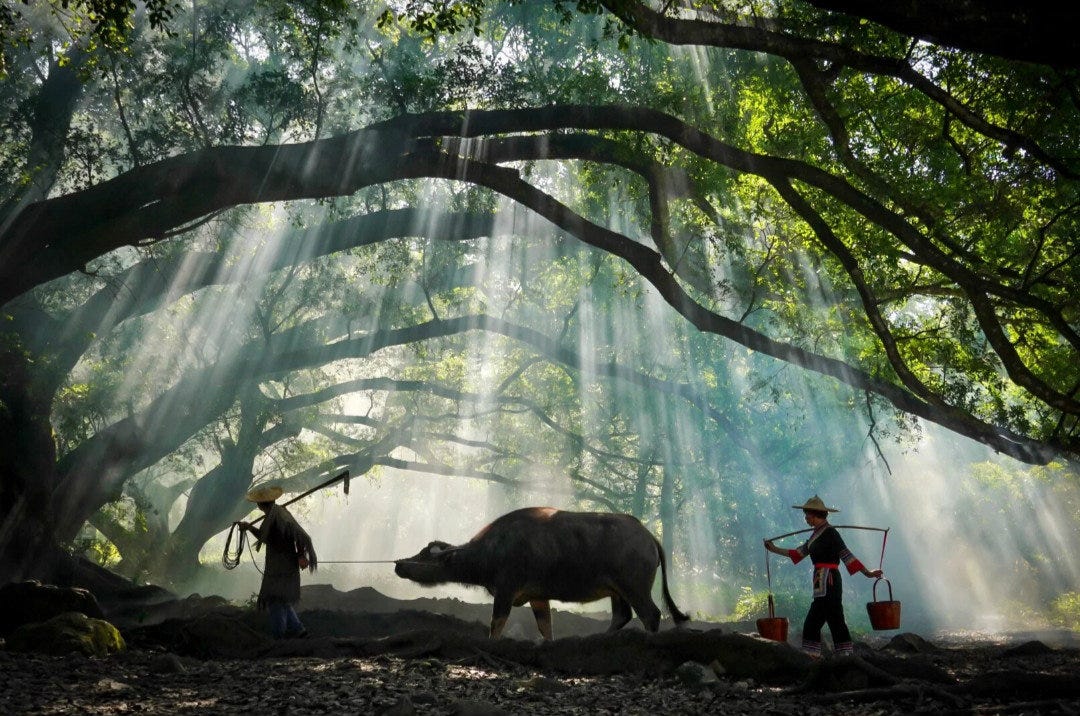 Staged snapshots of farmers plowing the land with buffalo are commonplace in Weibo posts on Xiapu. Travel Career/Weibo

Like Colonial Williamsburg in Virginia, Xiapu reminds one of what rural China was like in its bygone days. It is still a largely agrarian town, but much of its picturesque landscape — and the people within it — is created by teams of photo crews masquerading as fake farmers and fishermen.

Before this masquerade took off, Xiapu was best known for its seafood. But years of bad harvests from the sea resulted in the area’s economy suffering. Then the local government had a bright idea: To cash in on rural tourism, it aimed to turn Xiapu into the rural seaside village of one’s dreams, according to local reports. The problem with that plan was — it wasn’t.

Now Xiapu is known for something else entirely. For the right price, Chinese and foreign visitors alike can get the perfect shot for their social-media profile, complete with “special effects” courtesy of local businessmen angling to facilitate photo shoots.

Fishermen wave colorful nets at just the right angle for photographers to get the ideal shot. 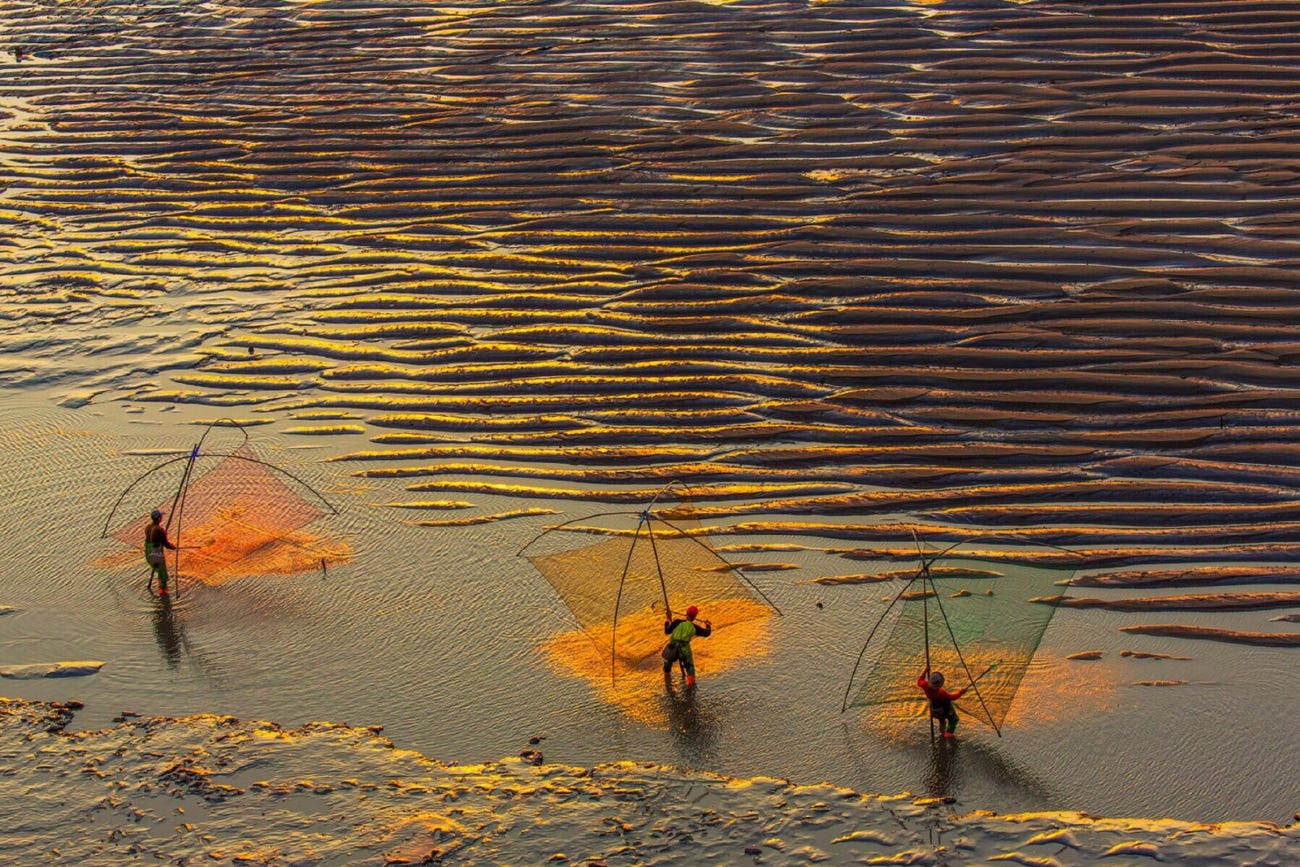 Models dressed in a rural fisherman’s garb wave nets for the benefit of tourists. ReLvXing/Weibo

According to The New York Times, the promise of awesome pictures from staged photo shoots is what really draws crowds to Xiapu County. The Times detailed how hordes of photographers lined up in a neat row along a bridge to catch a staged snapshot of a model in a traditional hat rowing his boat toward the bridge.

The model was paid $30 for his troubles, The Times noted.

Teamwork makes the dream work. The fishermen offering the staged photo services stand by, waiting for the signal to cast their nets. 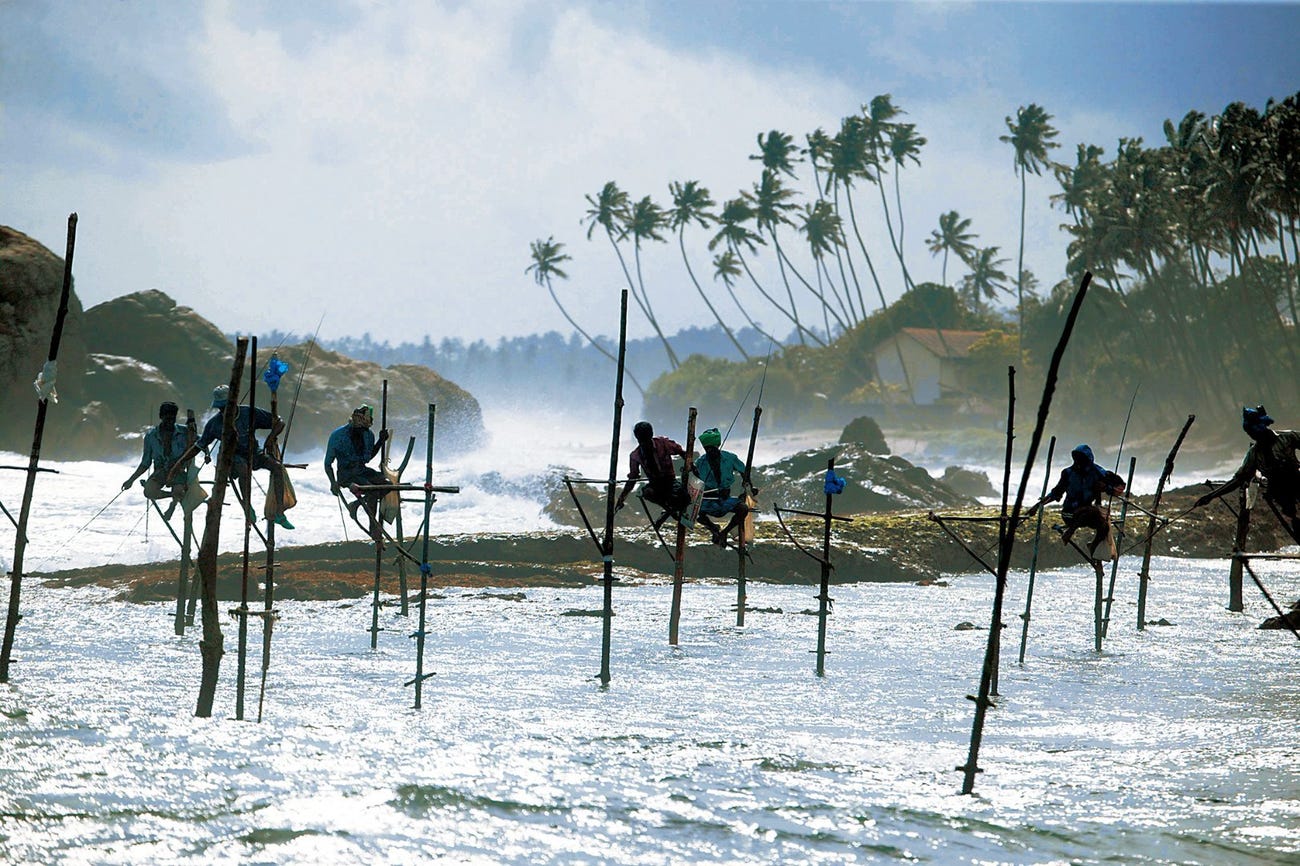 Weibo posters say that most of Xiapu’s fishermen seen in photos are models just waiting for tourist buses to come by before unfurling their colored nets. ShuYuShideChuanShuo/Weibo

The Times spoke to Liu Weishun, 40, who manages an attraction where gigantic, unused fishing nets are deployed for staged photos. Liu told the outlet that some 500 visitors come to his site every day and pay him $3 each to take photos of people casting the nets. Some even fork out an extra charge for a model wearing a straw hat to row by — directed, of course, by Liu, who gives him stage directions via a walkie-talkie.

“The photographers have expectations for their work,” Liu told The Times. “They need someone in specific positions, in a way that meets their composition needs.”

Behind the scenes, this “farmer” and his buffalo don’t do much farming at all. 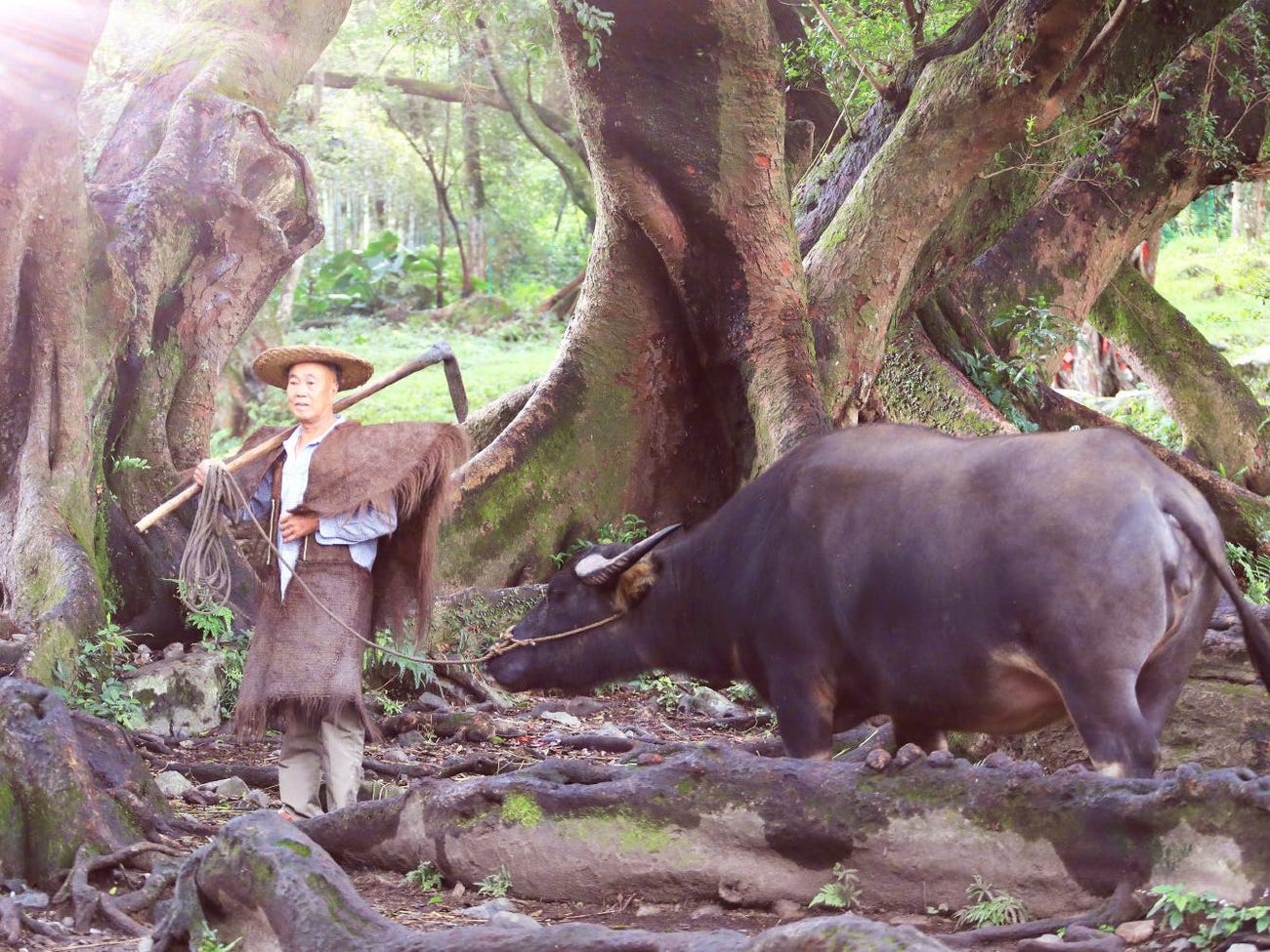 In between shoots, the “farmers” stand idle, hoe in hand, beside their animals, Weibo posters told Insider. Man and beast alike take rests, too, after pacing up and down for hours in front of photographers lining up with their tripods. Sina Travel/Weibo

The farmers don’t just manifest from the morning mist, either. Snapshots on Weibo, the Chinese version of Twitter, showed a man setting straw on fire as two middle-aged people trudged through the mud, tugging a buffalo behind them.

This reenacted pastoral scene is also one of the county’s most popular locales for the social-media-savvy, some of whom show up in hanfu, or traditional Chinese garb.

Filtered photos from Xiapu often show geese taking a leisurely gander. The woman in this photo is a model, though, and the geese are trained to play to the cameras, tourists told Insider. 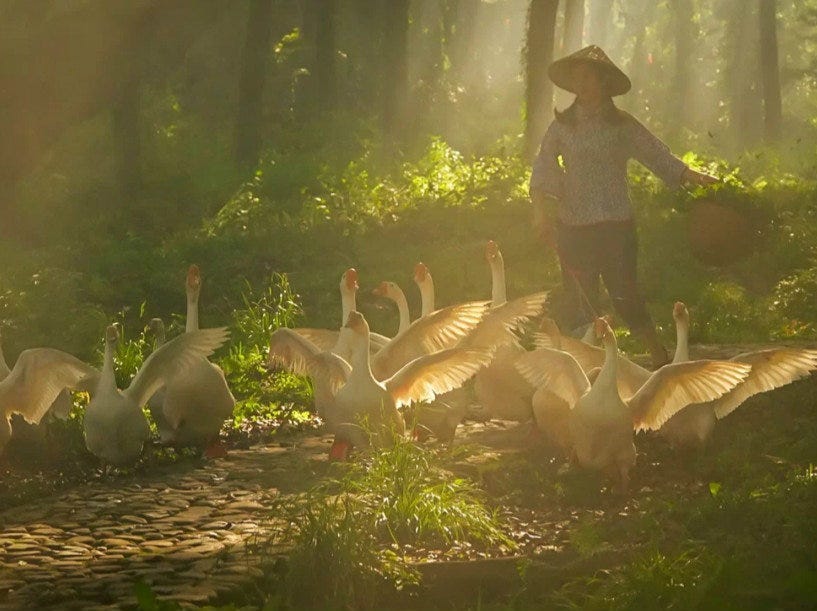 These filtered, well-lit snapshots of flocks of geese are the result of a painstaking process to engineer the best snaps of the area.  LvXingZhecareer/Weibo

Fake or not, rural tourist spots like Xiapu recently saw a resurgence in popularity. CNN reported in May that city dwellers were heading to the countryside in search of interesting locales and alternative local travel destinations after international travel was curbed because of the pandemic.

The rural tourism boom was also fueled by the popularity of Li Ziqi, an online superstar who became one of the country’s top influencers on Weibo because of her bucolic depictions of the Chinese countryside. 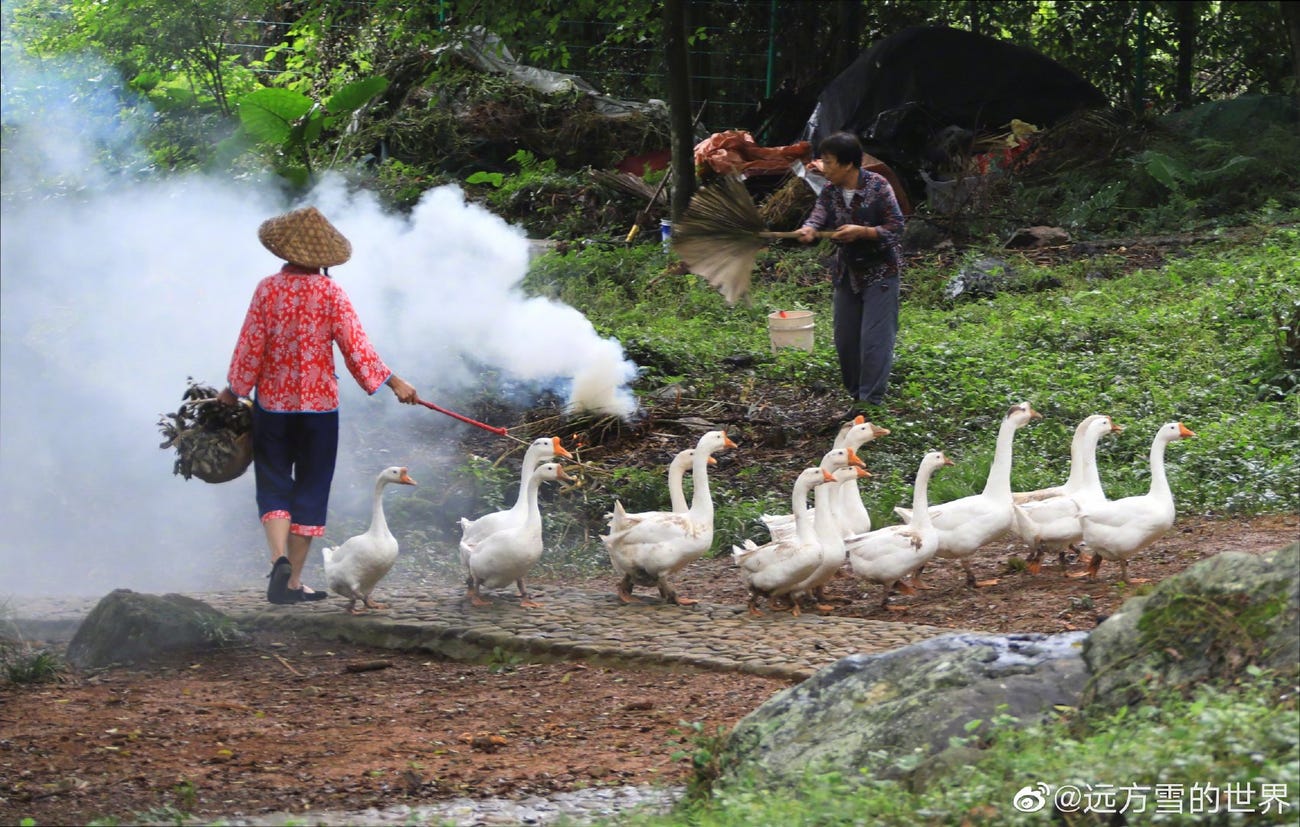 The geese and the woman posing as the farmer have to walk through the thick smoke, to give photographers and visitors to Xiapu the chance to get the money shot of a rural worker emerging from the mysterious mist. Sina Travel/Weibo

Eager to put up appearances, some visitors to the county have even likened its landscapes to scenes from “Spirited Away,” the Oscar-winning animated film from the Japanese auteur Hayao Miyazaki.

“Heaven on earth,” wrote one Weibo user ShenghuiFashi, who posted a 30-second video of the farmers pacing back and forth with the buffalo in tow.

But angry accounts on Weibo beg to differ. 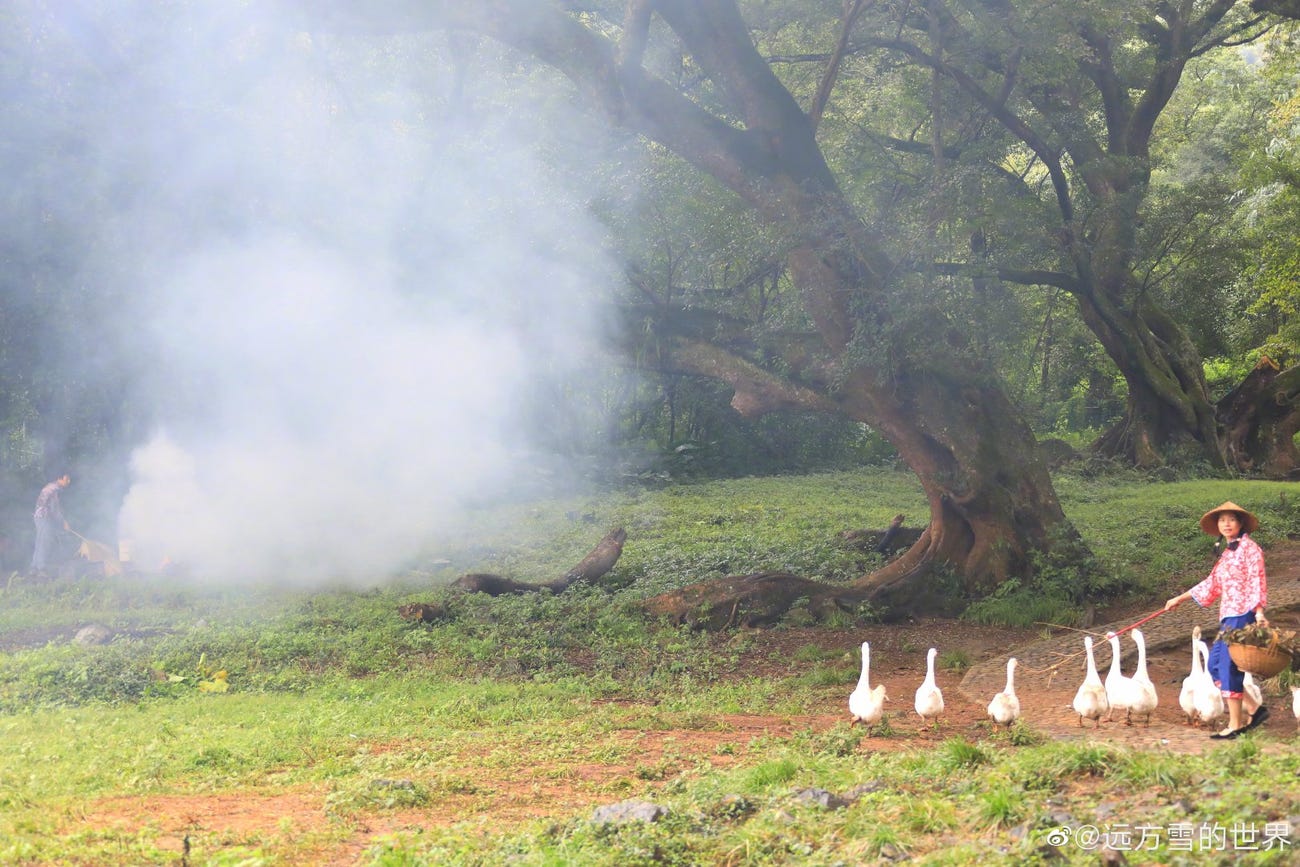 The reality behind social-media photos of the area is really a man fanning a stack of burning straw to create a mystical “mist,” and a flustered worker trying to keep her geese in a row.  YuanFangXuedeShiJie/Weibo

“Not sure what’s real or fake anymore,” another said.

Some Weibo reviewers say they were scammed into visiting Xiapu believing it would be a wonderful, untouched rural environment. They were sorely disappointed. 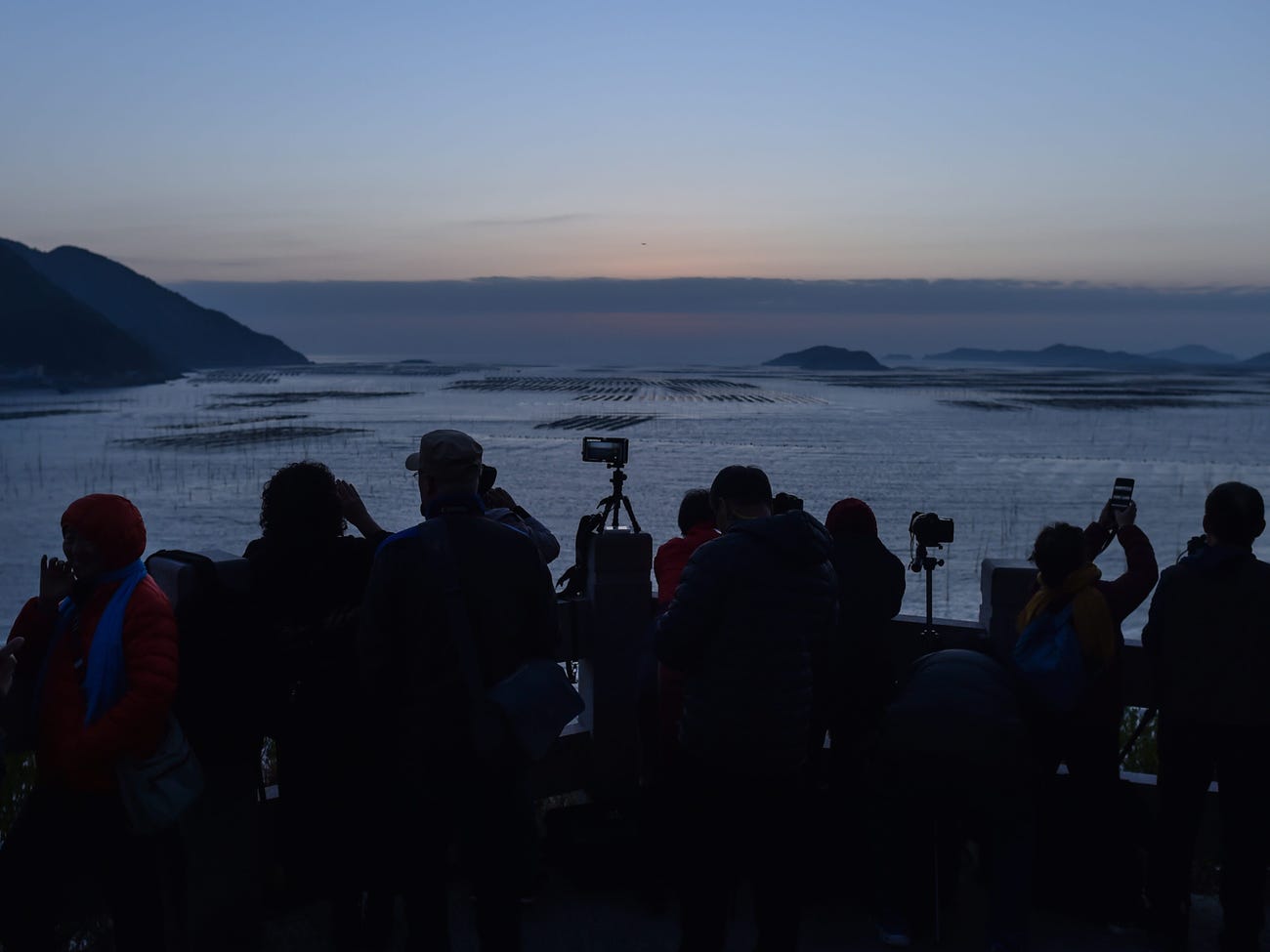 Xiapu is a major attraction for budding Chinese photographers drawn to its striking imagery and a traditional way of life far removed from the skyscrapers and bustle of the country’s megacities. Hector Retamal/AFP via Getty Images

Another Weibo poster named Sentez wrote: “This is a scam. Teenagers are getting cheated into making their way down to this hot spot thinking it’s all real. What’s worse is when they find out the farmers are fake and just ‘modeling,’ they still don’t expose it because they’d rather post pretty photos.”

“Behind one brilliant picture of a rural landscape, I’m guessing there are 10 tripods. It’s so artificial, but people will be willing to pay for it.”

Another visitor to Xiapu went as far as to warn other tourists not to visit the place at all. 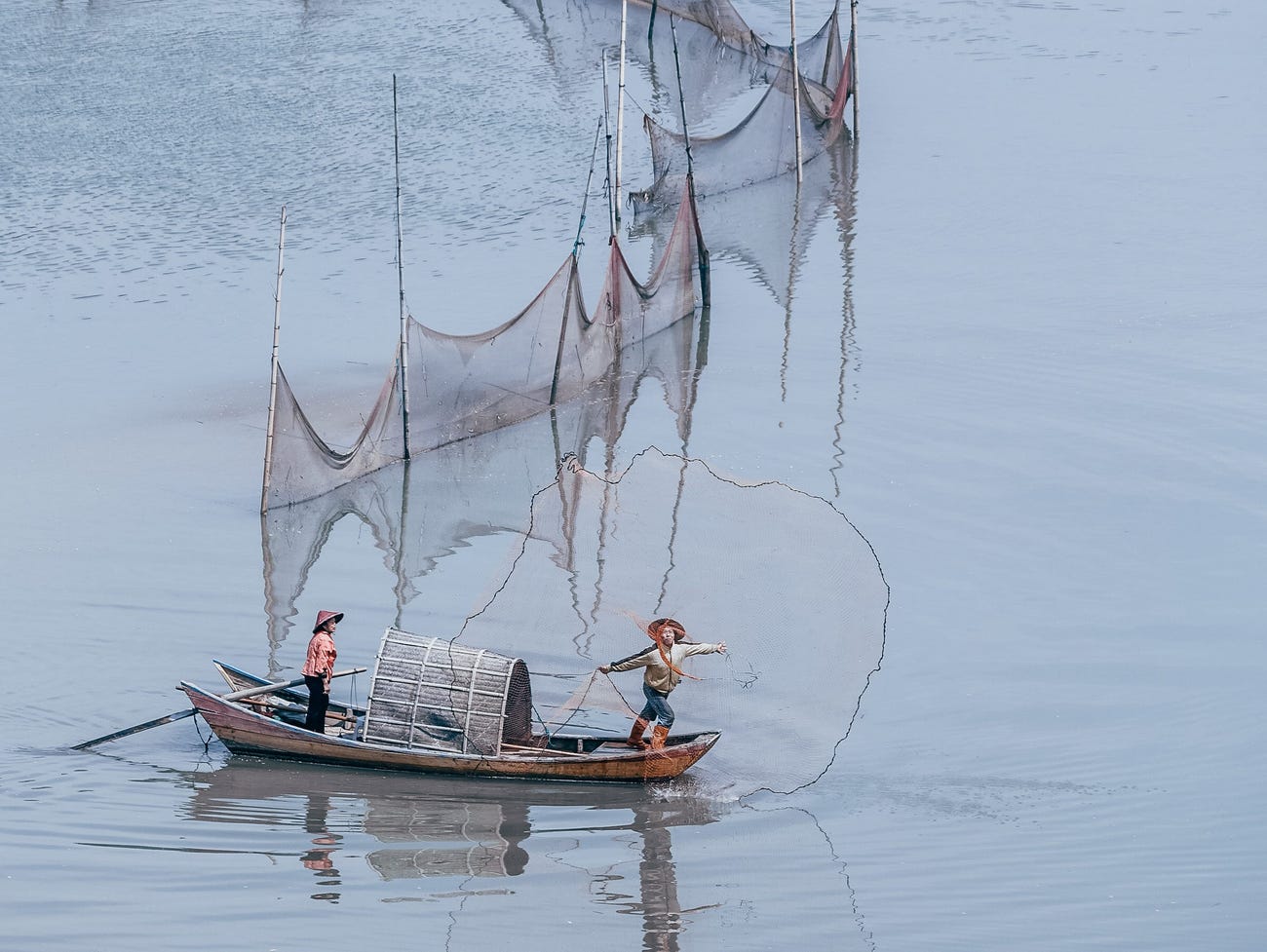 Fishermen in Xiapu have to cast their nets over and over for tourists to get pictures of them at the right moment. HeiHeiYingYouJi/Weibo

“First of all, the so-called rural people in the social-media photos are all actors, and the county itself is pretty much like a staging area for a photo shoot. In reality, without the filters, the place is extremely ordinary. The beach is dirty, and the seafood restaurants are famous for ripping people off,” the reviewer said.

But if staged photos of farmers and fishermen are your thing, then Xiapu is the place for you. 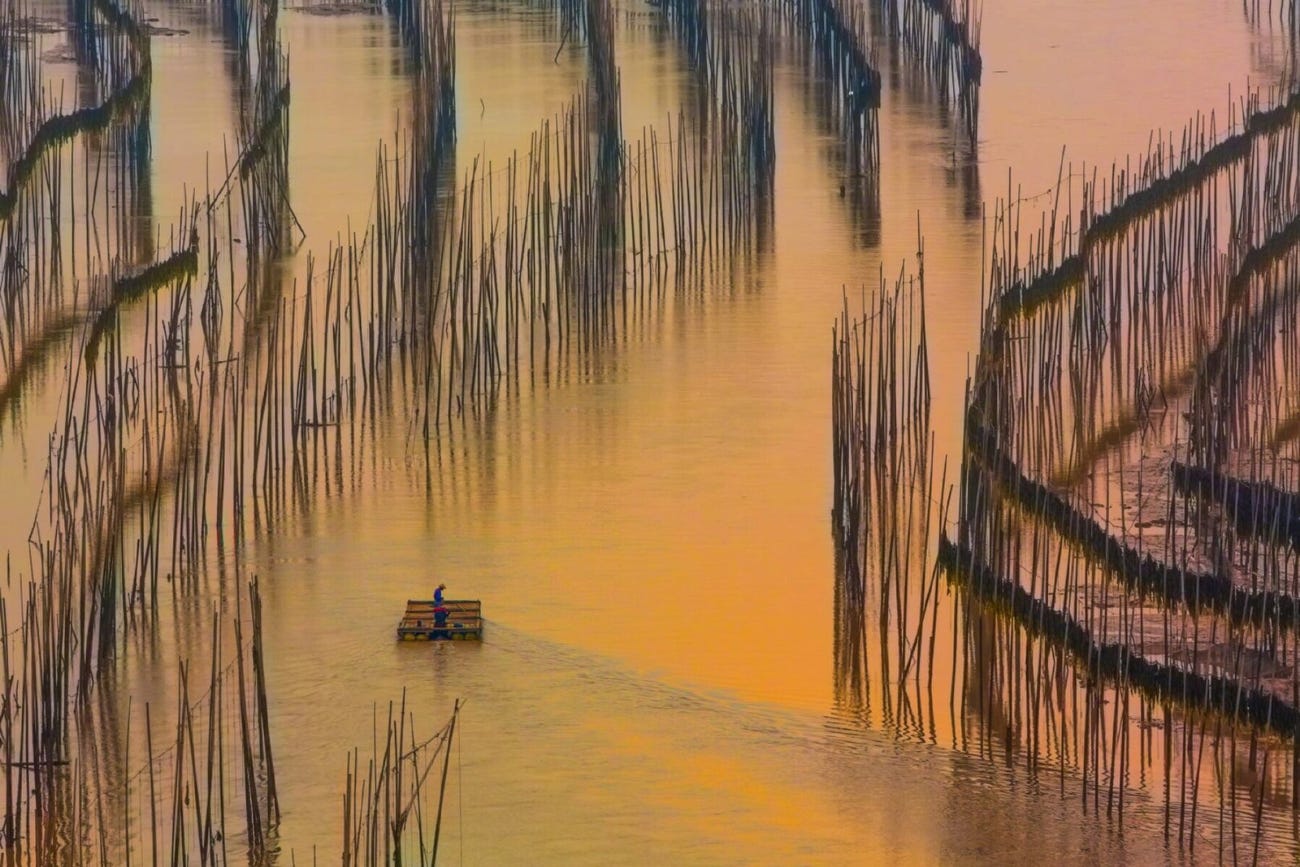 Whether photographs are staged might not matter to some people who just want a social-media-worthy snapshot. ReLvXing/Weibo

But some were content to embrace the veneer of artificiality shrouding Xiapu County.

“Under the trees, the old people walked around and it kind of looked like a movie. But the mist was just smoke from a burning pile,” wrote Weibo poster OuQiDeBao. “Ah, but in this world, who cares if it’s fake or not, as long as it’s pretty in the pictures.”