Source: NYT (6/16/21)
Hong Kong Cracks Down on a Pro-Democracy Newspaper
阅读简体中文版 | 閱讀繁體中文版
Police arrested the top editors of Apple Daily, froze its assets and raided its newsroom, in a sharp escalation of the government’s campaign against dissent.
By Austin Ramzy and Tiffany May 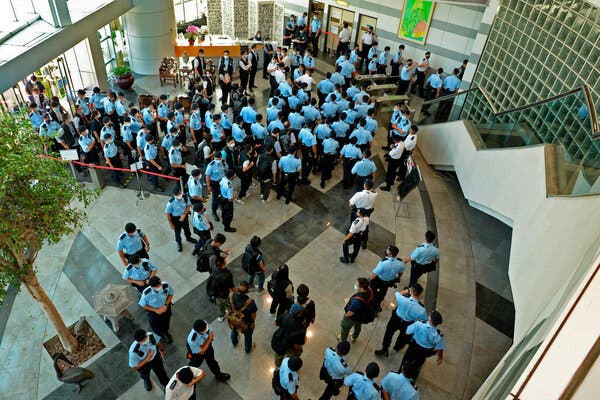 HONG KONG — When the Hong Kong police last year arrested Jimmy Lai, a pugnacious newspaper publisher, they seemed to be going after a longtime government critic. On Thursday, the city’s authorities sent a message to the rest of the media industry: Be careful what you write.

The raid and new restrictions were the most aggressive use yet of Hong Kong’s sweeping national security law, imposed last year by Beijing, against a media outlet, and could put the newspaper’s survival in question. The operation was a sharp escalation in the authorities’ intensifying frontal assault on media outlets in Hong Kong, a former British colony once known for its vibrant media scene and broad free-speech protections.

The pressure on Apple Daily had been building for months, with officials and pro-Beijing voices singling the newspaper out for criticism. Mr. Lai is already in prison for taking part in illegal protests, charges his supporters say were trumped up to silence him.

“But today’s actions are still shocking,” said Yuen Chan, a senior lecturer of journalism at City, University of London who previously worked for Hong Kong media outlets, pointing to the raid and seizure of computers, among other things. “We have to remind ourselves that until very recently, a free press was regarded as ‘normal’ in Hong Kong.”

In recent months, the government has moved to rein in the media. It has sought to overhaul a public broadcaster known for its investigative work, replacing editors and pulling programs. Top police officials have warned journalists that they could be investigated for reporting “fake news.” A court in April convicted a journalist of making false statements over a news report that was critical of the police.

The police said they had arrested five executives and editors at Apple Daily and its parent company, Next Digital, on suspicion of “collusion with a foreign country or with external elements to endanger national security.”

Trading of Next Digital’s shares was suspended in Hong Kong on Thursday morning after news of the arrests.

With its accounts frozen, Apple Daily would have difficulty paying its staff of about 700, said Mark Simon, an aide to Mr. Lai, the newspaper’s founder.

Apple Daily continued to report on the raid even as police officers declared the newsroom a crime scene. When officers prevented the reporters from livestreaming the raid from inside the office and forced them to leave, the paper set up a camera on the building’s roof that watched the operation from a distance. Once they were allowed to return to their seats, reporters whose desktop computers had been seized wrote articles on their mobile phones instead.

On its website, the newspaper posted more than a dozen articles and videos about the police operation, with photos of its editors and executives being taken from their homes in handcuffs, and of police officers in the newsroom studying the contents of reporters’ computers and taking away crates of evidence.

“Apple Daily vows to carry on and publish as usual,” one headline read. The paper said it would print 500,000 copies on Friday, several times its average daily circulation of about 90,000. 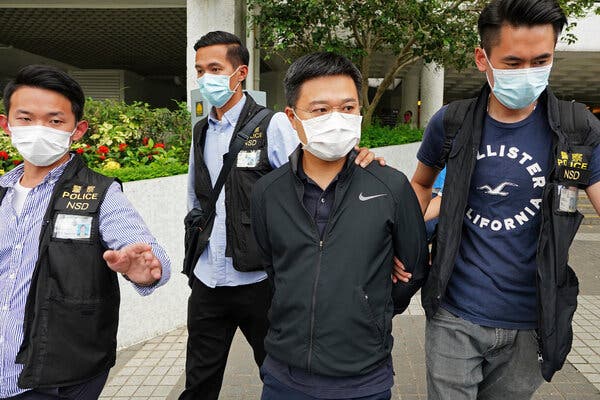 Ryan Law, Apple Daily’s editor in chief, was among those arrested on Thursday. Credit…Associated Press

The police said they had a warrant to search and seize journalistic material. It said an investigation showed more than 30 Apple Daily articles had urged foreign countries to enact sanctions against Hong Kong and China.

The United States has imposed sanctions against officials in Hong Kong and China over Beijing’s moves to rein in the city. Under the security law, calls for such sanctions are considered acts of collusion with foreign countries. Mr. Lai, the paper’s founder, also faces separate charges under the national security law for allegedly calling for international sanctions against Hong Kong.

“We have very strong evidence that the articles in question play a crucial part in the entire conspiracy scheme, providing talking points to foreign countries or overseas institutions to impose sanctions,” Li Kwai-wah, a senior superintendent in the police’s national security department, said at a news conference.

Mr. Li also warned the public against sharing articles from Apple Daily. “As a law enforcer, I would advise you not to invite suspicion,” he said. He did not specify which articles.

John Lee, Hong Kong’s security secretary, denied that the raid and arrests would harm press freedom in the city and cautioned journalists to distance themselves from Apple Daily.

“This action has nothing to do with normal journalism work,” he said. “It is aimed at suspected use of journalism as a tool to commit acts that endanger national security. Normal journalists are different from them. Don’t get involved with them, and keep a distance from them.”

The Liaison Office of the Central People’s Government, Beijing’s official arm in Hong Kong, described the arrests and asset freezes as just, and made clear that there were limits to the freedom of speech enshrined in the city’s mini-constitution.

“There are no rights and freedoms without boundaries. None can breach the bottom line of national security,” the office said in a statement.

The government’s accusations against Apple Daily raised alarms for advocates of media freedom in the city.

“We just can’t see how articles or reports carried by news media would constitute a threat to national security,” said Chris Yeung, the chair of the Hong Kong Journalists Association. “It gives rise to fear that speech can be seen as acts and are vulnerable to the national security law.” 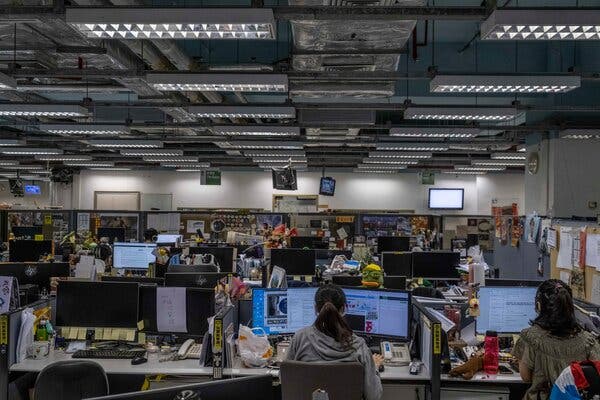 The Apple Daily newsroom in Hong Kong in 2020. The Hong Kong police warned the newspaper’s readers on Thursday not to repost some of its articles online. Credit…Lam Yik Fei for The New York Times

The authorities froze about $2.3 million in accounts belonging to Apple Daily and affiliated companies.

Mr. Lai and his newspaper have long been a thorn in the side of the Chinese and Hong Kong governments, and Beijing has targeted him as one of its leading enemies in the territory.

Hong Kong’s chief of police, Chris Tang, singled out Apple Daily in April for its coverage of a national security event hosted by the police and warned that the authorities would investigate news outlets seen as having endangered national security.

Despite the mounting pressure on Apple Daily, its journalists pledged to get back to work.

“As difficult as the current circumstances may be, we will carry on with our jobs with the aim to publish our papers as normal tomorrow,” the Next Media Trade Union wrote in a statement.

But the newspaper acknowledged its fate was out of its hands. “In today’s Hong Kong, we are unfamiliar and speechless,” the Apple Daily said in a letter to its readers, posted on its website. “It seems that we are powerless to deal with it, and it is difficult to prevent the regime from doing whatever it wants.”