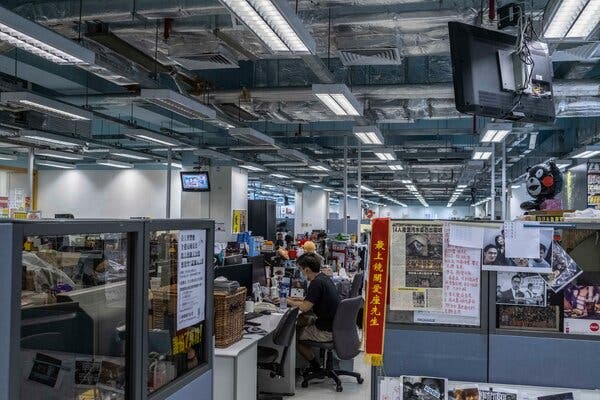 The newsroom of Apple Daily in Hong Kong in 2020. The chief of police has accused the paper of “inciting hatred.” Credit…Lam Yik Fei for The New York Times

HONG KONG — The glossy pamphlet from the police, delivered to newsrooms in Hong Kong, declared: “Know the Facts: Rumors and Lies Can Never Be Right.” With it was a letter addressed to editors, decrying the “wicked and slanderous attacks” against the police.

The 12-page magazine, distributed Wednesday to news outlets including The New York Times, described the police’s efforts to push back against misinformation. In one instance, the department countered rumors that officers had attended a banquet with gang members, saying the police had held their own private dinner. In another, it accused a local TV station of smearing the police in a parody show.

Officials in Hong Kong are increasingly seizing on the label of “fake news,” a common authoritarian refrain. The city’s leader, Carrie Lam, said on Wednesday that the government was looking at laws to tackle “misinformation, hatred and lies.” The city’s police chief has said a fake-news law would help fight threats to national security.

The rhetoric is raising fears among activists that the label could be used as a new tool to muzzle dissent.

The authorities have moved swiftly to quash the opposition in Hong Kong since antigovernment protests engulfed the city in 2019, using a sweeping national security law to arrest most of the city’s leading opposition figures. On Thursday, a court sentenced a prominent activist, Joshua Wong, to another ten months in prison, on top of previous sentences for unauthorized assembly of 17 and a half months.

The city’s traditionally unfettered news media, known for coverage that has been critical of the establishment, has been under attack for months. The national security law, which calls for increased regulation of the media, has given the police and local officials powerful tools to constrain the press, but they are seeking more. 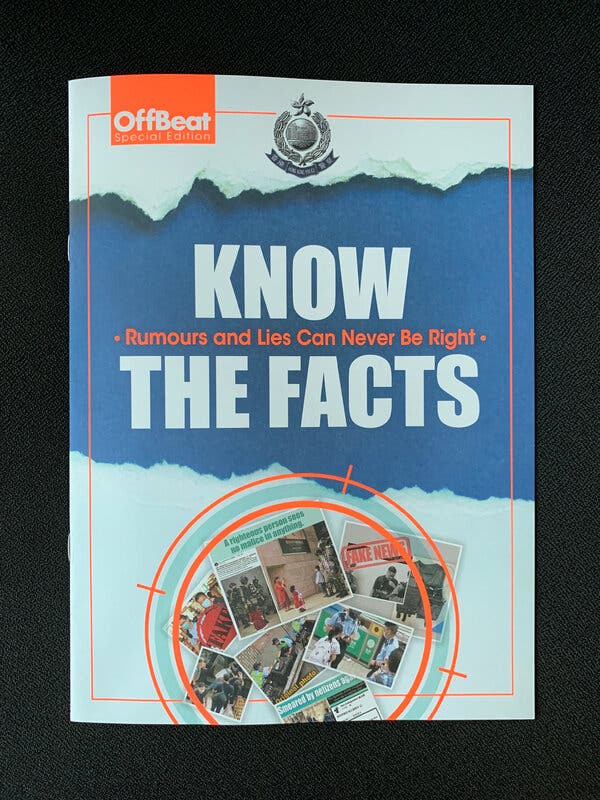 The glossy pamphlet from the police was delivered to newsrooms across Hong Kong.

Mrs. Lam, the city’s chief executive, has said that the government was exploring legislation to curb fake news, which she said spread online during the protests and the pandemic.

“We have seen the internet, especially social media, flooded with doxxing, hateful and discriminatory remarks and fake news,” she said in remarks to lawmakers in February. Mrs. Lam has said that the proposed legislation had yet to be drafted because the government was still examining how such laws were handled elsewhere.

Like elsewhere, fake reports online can sometimes be an issue in Hong Kong. Last year, rumors of shortages drove the hoarding of toilet paper and other supplies. Unsubstantiated reports of deaths in a subway station circulated for months in 2019 after police attacked protesters with pepper spray and batons.

In Asia, countries such as Cambodia, Singapore and Malaysia have passed laws in recent years to curb fake news. While those governments have described the legislation as important to prevent falsehoods leading to threats to public safety and national security, critics say they have been used to stifle dissent.

In Hong Kong, media freedom organizations said they were worried that such a law would be used to target critical coverage, putting further pressure on the city’s embattled news outlets.

“There is no doubt it is the worst of times,” said Chris Yeung, the chairman of the Hong Kong Journalists Association. Mr. Yeung said that the government’s push against what it called fake news was an attempt to avoid accountability for public discontent.

“They will also try to redefine the 2019 protests as something that happened because of misleading information, not because of wrong decisions by the chief executive,” police misconduct or failed policies, he said.

Hong Kong’s chief of police, Chris Tang, has warned that the police would investigate news outlets deemed to be endangering national security.

“Agents of foreign forces disseminate fake news and disinformation to drive a wedge in the community, cause division in society and to incite violence,” Mr. Tang told lawmakers last month. He singled out Apple Daily, a pro-democracy news outlet, for criticism, accusing it of “inciting hatred” in its coverage of schoolchildren attending a national security event hosted by the police in April.

The newspaper had run on its front page photos showing the children playing with toy guns at a police exhibition, alongside images of police officers attacking protesters in a subway station in 2019. “There was a lot of smearing targeting schoolchildren,” Mr. Tang said. 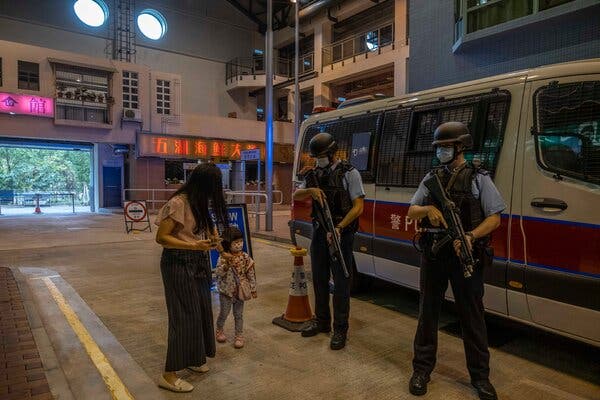 The police have long complained about Apple Daily’s coverage. The department says it has sent more than 100 letters to the newspaper seeking corrections and clarifications. The newspaper’s problems extend all the way to its founder, Jimmy Lai, who is serving a 14-month prison sentence for protesting in 2019, and is accused of fraud and colluding with a foreign country.

The police have also bristled at coverage by RTHK, a government-funded public broadcaster with a tradition of independent coverage. The police complained about a parody program that portrayed officers as trash, with an actor portraying an officer in a garbage can.

The government has moved to rein the broadcaster in, replacing its top editor with a civil servant with no journalism experience in February. Under the new leadership the broadcaster has cut two radio programs known for sharp political commentary and added a new show hosted by Mrs. Lam, the city’s leader, discussing an electoral overhaul imposed by Beijing that critics say would cripple the opposition.

The broadcaster was also at the center of a closely watched court case last month in which a former freelance producer for RTHK was convicted of making false statements to obtain public records for a report that was critical of the police. The journalist, Choy Yuk-ling, used the records for a documentary that examined how the police were slow to respond to an attack by a mob on protesters at a train station in 2019.

On Thursday, Ms. Choy’s documentary was honored in Hong Kong with a human rights award. “Chasing the smallest clues, interrogating the powerful without fear or favor,” wrote the judging panel, which called it an “investigative reporting classic.”

The broadcaster has said that it would not accept the award.

Austin Ramzy is a Hong Kong reporter, focusing on coverage of the city and also of regional and breaking news. He previously covered major events around Asia from Taipei and Beijing. @austinramzy