Source: SCMP (5/3/21)
Hong Kong’s colonial history brought to life at The Museum Victoria City with avid collector’s authentic and reimagined artefacts
Collector and founder of The Museum Victoria City, Bryan Ong has been interested in colonial memorabilia since he was 15 years old. His collection includes medals, military jackets, banknotes and hand-painted reproductions
By Bernice Chan

The recently opened The Museum Victoria City in Central takes visitors down memory lane, with a mixture of authentic and re-interpreted nostalgic items from colonial Hong Kong.

There are red British military ceremonial jackets, embroidered badges with a lion and a dragon, a full body armour plate, the old “Murray Building” sign before it was turned into a hotel, and the old Urban Council logo.

There’s also a portrait of young Queen Elizabeth wearing a crown and yellow evening gown that looks like it could have hung in a government building up until June 30, 1997, except that it isn’t a British government-issued portrait – instead it’s one the Museum’s founder Bryan Ong Ye-hou had painted.

“The original portrait is in The Royal Gallery. The royal portraits that were in the [Hong Kong] government buildings were all copies,” he says. There are surviving old government copies but these have faded. So he and his team repainted the portrait, which required research into the garter and details of the jewellery she was wearing. 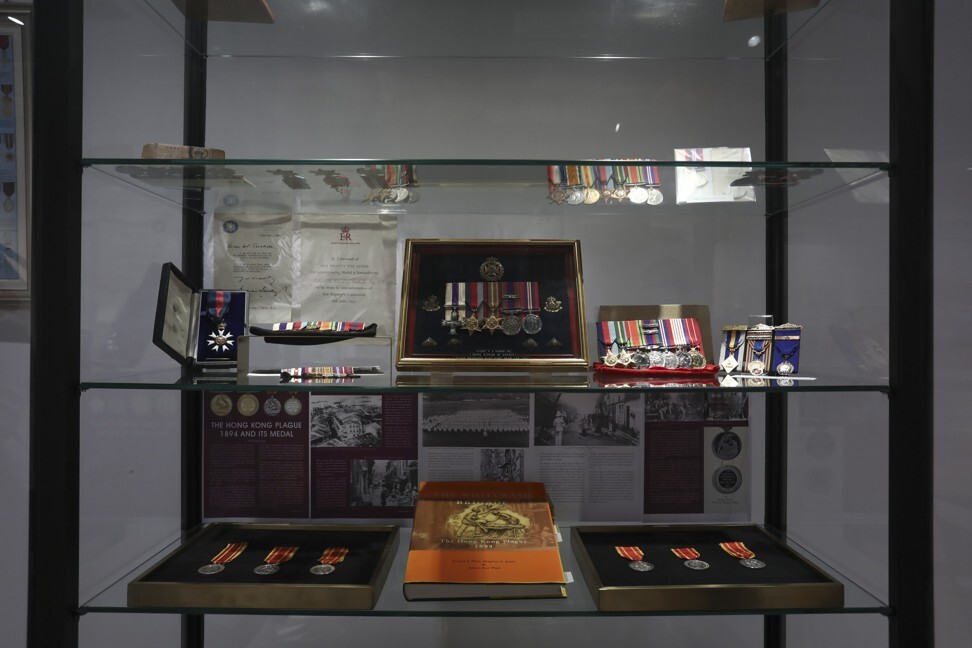 A display of old war medals at The Museum in Central, Hong Kong. Photo: Jonathan Wong

At a time of great political changes being introduced by Beijing in the former Crown colony, the 40-year-old Ong is unapologetically nostalgic about British Hong Kong, with rose-tinted glasses firmly on. And with an art background, he is a collector who is keen on reinterpreting the city’s history in his own way.

In a showcase cabinet there are some medals laid out that were previously owned by British and Canadian soldiers who fought in the Battle of Hong Kong.

Ong can explain the backstory to every medal in his collection, like the ones received by Canadian Lieutenant F G Power of the Royal Rifles of Canada. Power was posted in Tai Tam and managed to hold off the Japanese invasion overnight, though he was later taken prisoner.

There are also six medals awarded to those who helped out during the 1894 Hong Kong bubonic plague outbreak that killed over 20,000 people and forced the British colonial government to do more for the welfare of the local residents. 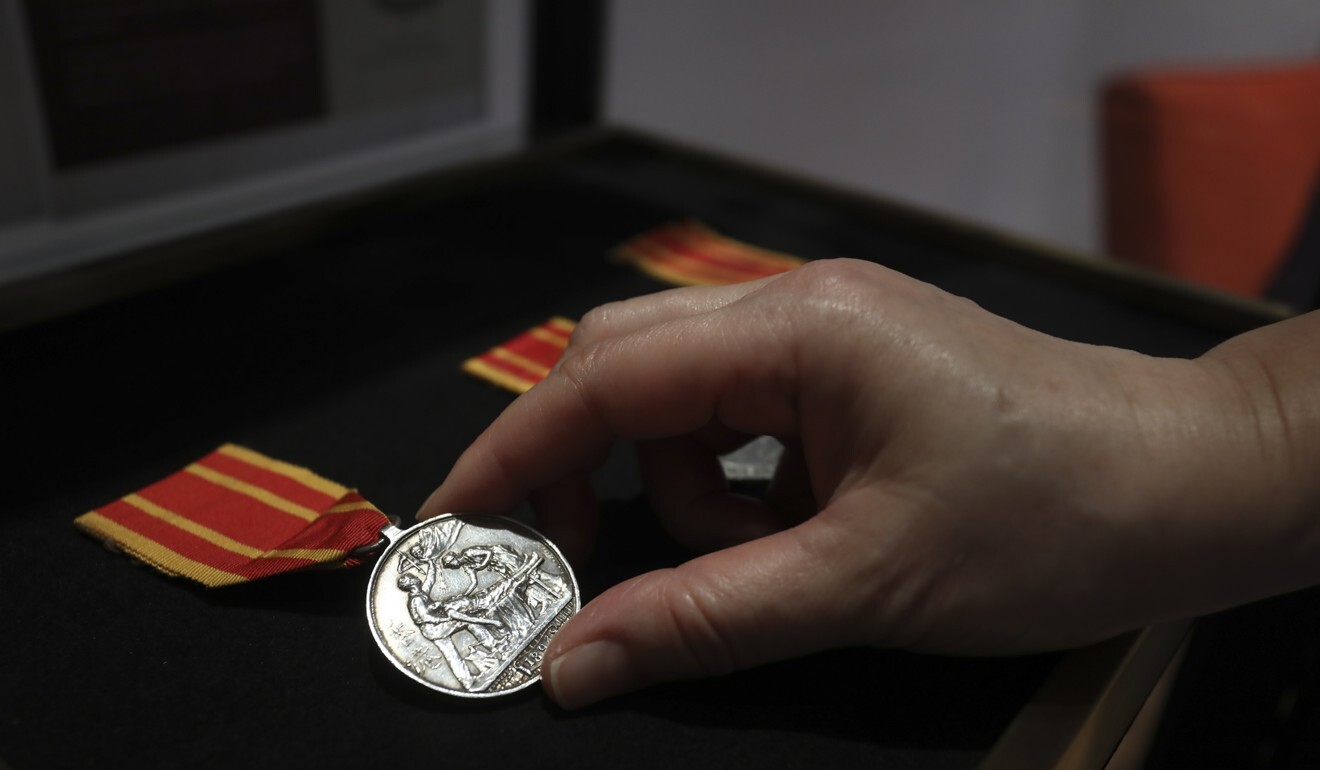 A medal for services rendered during the 1894 bubonic plague outbreak in Hong Kong. Photo: Jonathan Wong

“The medals were made in Britain, depicting someone dying and a nurse trying to save them. On the far left they added what is supposed to be “Hong Kong” in Chinese characters. Though the characters don’t look nice, it’s interesting,” remarks Ong, who has donned a three-piece suit for his picture to be taken.

He also has a collection of over 40 banknotes, some dating back to the 1930s. Two of these he had enlarged exponentially and reproduced, hand painted, on canvas.

One is a HK$100 note issued by the Mercantile Bank Limited in November 1973. “This bank note is a special bird’s eye view of Hong Kong Island, Kowloon and Lamma,” explains Ong. “Instead of making a replica we hand painted it. You can see every small brush stroke to get all the details that we followed from a real bank note.” 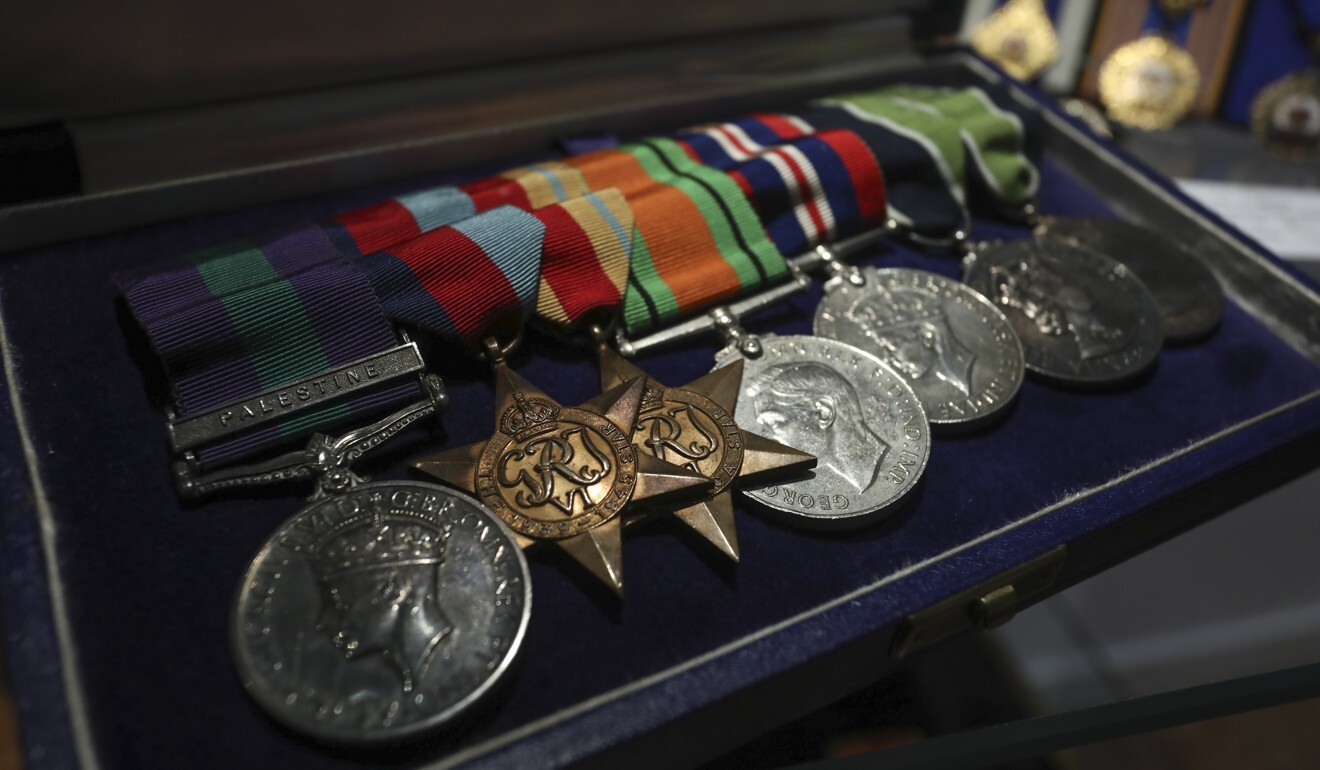 Medals and decoration for the Battle of Hong Kong in December 1941 at The Museum in Central, Hong Kong. Photo: Jonathan Wong

This is Ong’s second shop and showroom. His first, House of Men opened in Causeway Bay about three years ago. Collecting Hong Kong’s past all started when Ong was 15 years old, when he used money his grandmother gave him to buy a general service medal that was awarded to a Gurkha.

“I thought the design was very nice and then I became more interested in military things when I realised I would be unable to serve in the army because of 1997,” he says. At the time, Ong saved as much pocket money as he could to spend on badges that he said were about HK$100 at the time, or any medals he could get his hands on.

“In high school before handover there were lots of these things on the market. Some people bought them as souvenirs, some old government stock was for sale, and some soldiers sold items too, like badges, equipment. 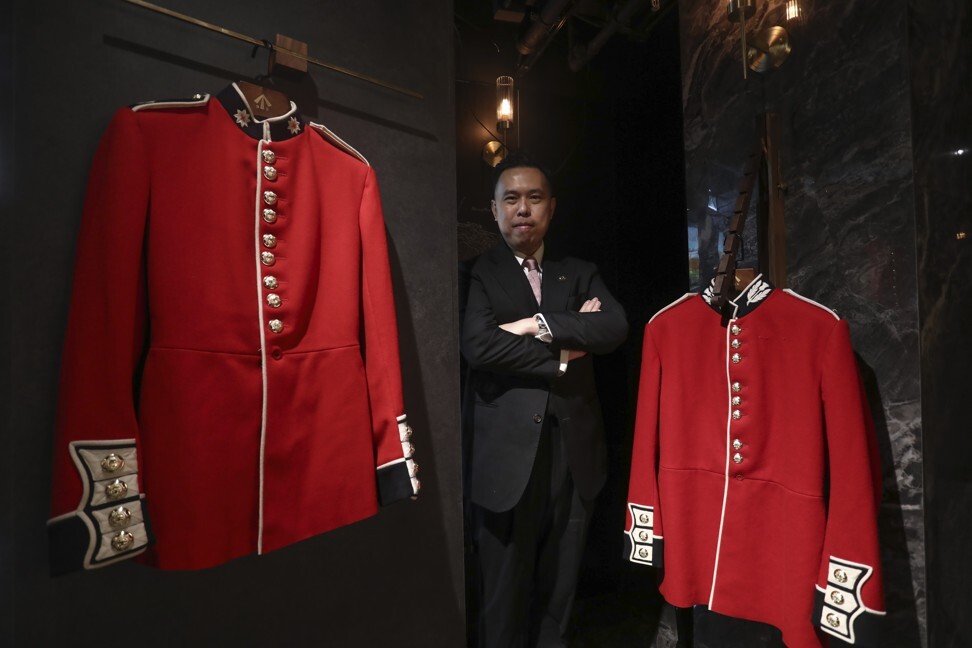 Ong started collecting memorabilia when he was 15. Photo: Jonathan Wong

Pre-pandemic Ong frequently went to the UK to meet suppliers and attended fairs where medals and other military items were bought and sold.

“People in the UK took things they collected from Hong Kong and brought them home, but I bought them back here. Some suppliers and collectors know about me, a Chinese in Hong Kong who is interested in buying back items.

As an adult, Ong’s artistic leanings led to a career as a designer and he has his own production house that creates graphics and advertising for clients. Some of his shop’s bestsellers are colonial-themed merchandise: T-shirts, tea sets and wine glasses with “HK” and a crown on top. He also makes reproductions of historic paintings, such as the one on show in the museum of a British trader and a Chinese comprador shaking hands on the dock by Victoria Harbour.

People of all kinds have shown an interest in this esoteric field. Some are specialised collectors, others are just interested in Hong Kong’s colonial history, including those who were born after the handover and never experienced colonial Hong Kong themselves, according to Ong.

“I appreciate the Hong Kong of before,” he says, such as the contribution of some colonial governors such as Murray MacLehose, who improved the lives of ordinary people. “We can’t dismiss these contributions,” he adds.

“History hasn’t changed, it’s the way it is presented that has changed. Yes I’m nostalgic, I’m proud of being a Hongkonger and this is my version of Hong Kong.”

The Museum Victoria City is located in Shop 2, My Central, 23 Graham Street, Central